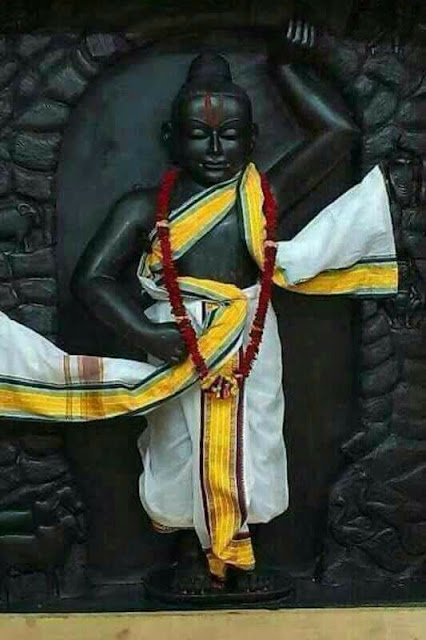 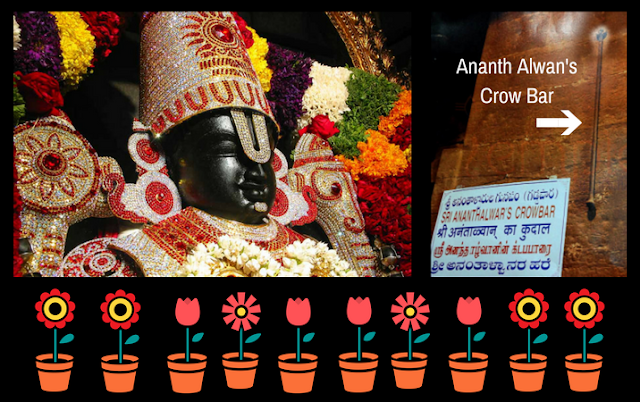 The scholars of different sects, Ramanuja and his disciples, the king, Tirumalaraya, and his courtiers assembled very early in the morning at a designated place on the following day. All of them went to the temple along with the temple priests and opened the doors of the sanctum sanctorum. To their surprise the deity was standing with a conch and discus in His hands. The scholars of the other sects accepted their defeat and Tirumalaraya declared that the self-manifested deity in the sanctum sanctorum of the main temple on Tirumala is that of Lord Venkateshwara. Since then people of all sects and religions worship the deity as Lord Venkateshwara. Ramanuja stayed in Tirumala for some days and became very pleased with his disciple Ananth Alwan for raising a beautiful flower garden for the Lord. Ramanuja returned to Sri-Rangam through Kanchipuram and decided to stay there for sometime to serve Lord Ranganatha.

After sometime, Ananth Alwan noticed that his wife was returning after dumping the soil very fast and was livelier than before. Ananth Alwan asked his wife the source of her new found energy and she said, “The Brahmachari who was asking you to engage him in digging the well is helping me by carrying the soil from the top of the well and dumping it for me.”

Blood began to ooze out of the chin of the main deity of Lord Venkateshwara in the sanctum sanctorum. The priests and the devotees who saw the blood were terrified and the news started to spread like wild fire. Some devotee went to the garden and told Ananth Alwan that blood was oozing out of the Lord’s chin. Ananth Alwan rushed to the temple immediately and was shocked to see the Brahmachari’s form in the deity and the blood was oozing from the spot on which the crowbar had hit the Brahmachari. Ananth Alwan fainted immediately after realizing that he had hit the Lord. When he regained his consciousness, Ananth Alwan repeatedly requested the Lord to forgive him and the Lord granted his prayers by accepting the flower garlands offered by him.

The priests of the temple had applied edible camphor on the Lord’s chin to stop the blood from oozing out. As the Lord appeared very attractive with the camphor on His chin, the priests decided to apply it everyday. The crowbar with which Ananth Alwan had hit the Lord is hung within the temple precincts to remind the devotees of the Lord’s pastime with Ananth Alwan.
Posted by krishna1008 at 12:07 PM