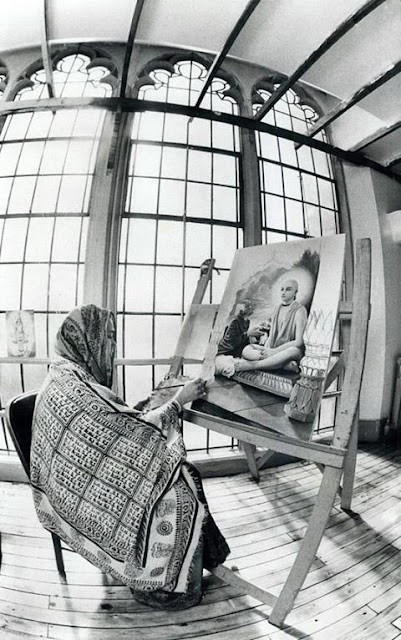 PADA: Mother Tribhuvaneshvari Dasi was a great friend of ours. She told me confidentially one day, she was mortified -- having been removed from her deity service in ISKCON, because she did not want to assist a program where the pooja to Krishna had to be offered first to Hansadutta. And as a result of her being purged from ISKCON, she said to me she had "lost her will to live." She said she missed seeing her deity too much, and could not go on living without Krishna's deity darshan and association.

About one year later she was in the hospital, diagnosed with terminal cancer. I was visiting her in the hospital, and she was nearly gone at that time. At our last visit, she was unconscious for the whole time I was chanting, but just before I left, I put my hand on her forehead (to say good bye) and she opened her eyes all of a sudden and she smiled, "Oh Puranjan, haribol!"

I think she was conveying to me to remember our previous conversation, about her "lack of will to live." And so now -- she was checking out of here, because she wanted to go to a place where she could serve Krishna without being harassed. And that is where we believe -- she went! Some of the gopis who were restrained from seeing Krishna -- also left their bodies.

That was the last time we saw her, she died shortly after that. I really miss her and devotees like her. As we see, these type people cannot be readily replaced, the deity program suffered ever since. As for the regime which halted the services of so many devotees like this, well, there is what is called pay back from the higher authorities, ok such as Lord Yamaraja. The regime will never be excused for treating so many great souls this way, never mind causing them to feel mortified if not to die prematurely. ys pd
Posted by krishna1008 at 4:10 PM