What Rascal Shall We Vote For? 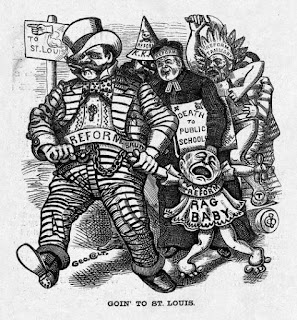 Which Rascal Shall We Vote For?

Interviewer: Do you think most of the Hare Krishna members will participate in the election in November? Do you think they will register and vote?

Prabhupada: Personally I never give votes.

Interviewer: Will they follow your example and not vote?

Prabhupada: I do not know, but our principle is that I vote for this man or that man if there is some spiritual benefit. That is our point. (Interview with the religion editor of the Associated Press in New York, 16 July 1976)


I have never given vote. Since we have got this sva-raj, Indian independence, as soon as the vote question comes up, I go away. I think, “Why shall I give this nonsense person my vote? None of them are liked by me.” So I avoid it. I don’t believe in it. (Room Conversation in Bombay, 8 January 1977)

Because of the importance of the Krishna consciousness movement, people should be Krishna conscious and should not vote for anyone who is not Krishna conscious. Then there will be actual peace and prosperity in the state. When a vaisnava sees mismanagement in the government, he feels great compassion in his heart and tries his best to purify the situation by spreading the Hare Krishna movement. (Purport to Bhag. 6.2.3)

Devotee: Some of our devotees should run for office.

Educate the people. “Don’t vote for the rascals. Just try to understand who is the real man, who is the real leader. (Morning walk conversation in Los Angeles, 11 December 1973)
Posted by krishna1008 at 8:24 PM