Bhakti Vikas swami fighting with himself 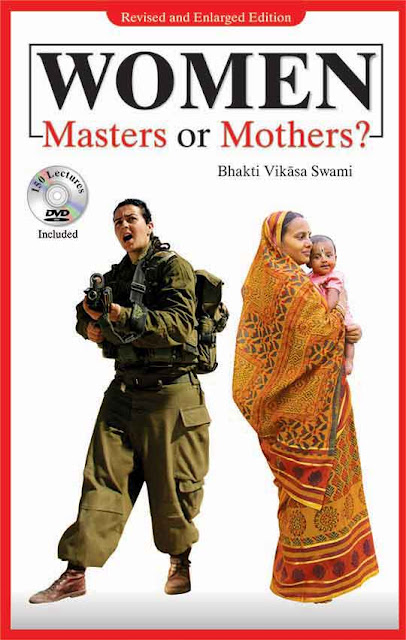 In January 2016, the GBC North American Executive Committee (NA EC) banned the saleof Women: Masters or Mothers? (WMM) by H.H. Bhakti Vikasa Swami. The book in question is largely made up of quotes of Srila Prabhupada on varnasrama, the need to establish it and the role and duties of women in society according to the sastra and Srila Prabhupada.

[PADA: Bhakti Vikas swami is writing and lecturing to combat the GBC's "liberalizing" of ISKCON by the GBC's allegedly promoting: A form of women's liberation -- and even women gurus; Gay marriages; Preaching against wearing Vaishnava dress; Minimizing the acharya; Failing to produce varnasrama and etc.

At the same time, BVKS says the people making all these deviations are -- Lord Krishna's successor acharyas. And we can thus easily find that BVKS is hanging out with his other GBC's messiahs giving them high-fives and big smiles. BVKS also says our idea of worship of the acharya is bogus, we need to worship his gay marriage and even gay acharya friendly pals as our messiahs from heaven.

In sum, BVKS says the same GBC who are burning down the house of ISKCON, are the GBC and acharyas of ISKCON. So therefore, he is simultaneously saying we need to attack the GBC's false acharyas, at the same time, worship these same GBC's as ours and Krishna's acharyas? This simply makes no sense? They are burning down the house of ISKCON, at the same time, they are the acharyas of ISKCON? This is contrary, to the max.

And which previous acharyas had to write a book to discredit the other acharyas? BVKS is trying to create the impression that acharyas are often fighting in public like cats and dogs over basic issues of siddhanta. So that means BVKS is trying to say acharyas are ordinary men who squabble among each other like East Lost Angeles gang members. That means BVKS is attacking the parampara by saying its members are mundane wranglers who are infighting all the time.

Meanwhile, a BVKS groupie was telling some women the other day that these women "should be living in a village and taking care of children." OK, what village is that? Where is this alleged GBC functioning village? It does not exist. So they are telling women to live somewhere, which does not even exist. There are barely any GBC managed varnasrama rural village programs, and in most cases there are none at all, and the few teeny farms they have are struggling to exist and are sometimes being closed, sold or made into fracking businesses.

Why tell people go live somewhere, when there is nowhere for them to go? This is another deviation, making pretend the GBC is doing its job of making varnasrama, and telling women to participate, when this program does not exist. So its creating a false sense of what women need to do NOW, and its confusing and creating mental complexities for the poor women class.

In any case, BVKS is arguing with his own shadow, he says in effect that we need to worship the GBC as our acharyas, but the GBC are deviating and I have to write a book to prove they are deviating. At the same time his program is telling women to walk the plank and get off the ISKCON ship and move to some non-existing village, which is simply a phantasmagoria, he has no place for all these women to go to. Its a pipe dream. Yes, the GBC is not doing its job, therefore, they are messiahs from heaven. And this is why people ask me, are these guys not taking their bi-polar medications?

And anyone could test this out themselves. Ask a random 100 women walking down the sidewalk in any USA city, "Are God's successor gurus having illicit sex and public infighting like cats and dogs"? These 100 women would ALL know the right answer, only BVKS has no clue what is the answer. And does BVKS honestly think women are going to hand off their kids to the BVKS "gurukulas"?

Its amazing to us at PADA that BVKS would dedicate his entire life to proving that God's successors are chasing sex and fighting like cats and dogs. Does he not know that God and Yamaraja and others are never going to approve of his program, like forever? Anway, billions of women know this is bogus, we stand with these women.


TRANSLATION
On hearing Sūta Gosvāmī speak thus, Śaunaka Muni, who was the elderly, learned leader of all the ṛṣis engaged in that prolonged sacrificial ceremony, congratulated Sūta Gosvāmī by addressing him as follows.


PURPORT
In a meeting of learned men, when there are congratulations or addresses for the speaker, the qualifications of the congratulator should be as follows. He must be the leader of the house and an elderly man. He must be vastly learned also. Śrī Śaunaka Ṛṣi had all these qualifications, and thus he stood up to congratulate Śrī Sūta Gosvāmī when he expressed his desire to present Śrīmad-Bhāgavatam exactly as he heard it from Śukadeva Gosvāmī and also realized it personally. Personal realization does not mean that one should, out of vanity, attempt to show one's own learning by trying to surpass the previous ācārya. He must have full confidence in the previous ācārya, and at the same time he must realize the subject matter so nicely that he can present the matter for the particular circumstances in a suitable manner. The original purpose of the text must be maintained. No obscure meaning should be screwed out of it, yet it should be presented in an interesting manner for the understanding of the audience. This is called realization. The leader of the assembly, Śaunaka, could estimate the value of the speaker, Śrī Sūta Gosvāmī, simply by his uttering yathādhītam and yathā-mati, and therefore he was very glad to congratulate him in ecstasy. No learned man should be willing to hear a person who does not represent the original ācārya. So the speaker and the audience were bona fide in this meeting where Bhāgavatam was being recited for the second time. That should be the standard of recitation of Bhāgavatam, so that the real purpose can be served without difficulty. Unless this situation is created, Bhāgavatam recitation for extraneous purposes is useless labor both for the speaker and for the audience.