[PADA: This video is spoken in apparently Russian or Baltic language, not sure, but has English sub-titles. What this simply means is -- MORE and MORE people are studying PADA's issues, ok and these are ALL the SAME issues we forwarded ages ago.

Many of the issues being discussed on this video were forwarded by PADA many years ago. Anyway, here is a summary of our main points:

1) Either Srila Prabhupada appointed conditioned souls as Krishna's acharya successors, or he did not. We say he didn't, and there is no evidence he did. If we look at the post-1977 history of the GBC's guru lineage, its full of fall downs, and controversies of all types, including orchestrated crimes.

It thus also does not seem this GBC guru sabha group are qualified to be the next acharya, never mind not being appointed to the post either? How is all the post-1977 subsequent banning, beating, molesting and orchestrated murders part of a "pure chain of gurus from God"? Even the karmis know, its not a pure guru lineage.

2) We said that GBC mistreated, if not banished, if not threatened many devotees, and some devotees were treated with physical violence. Worse, especially the women and children were not treated fairly, and apparently also cows (at least in some cases) were mistreated as well. That process has been verified in spades, not sure why anyone doubts any of this at this point.

3) We said the books are being changed, with unauthorized edits. Many, perhaps at this point MOST people, now agree with us on this issue.

4) We said that Srila Prabhupada complained that he was being poisoned. Either he said that or he did not? When we wanted to publicly announce the poison issue and the November 1977 audio tapes at Rathayatra in 1997, Kamsahanta prabhu tried to physically stop me from going out the door.

He complained that this poison issue will "destroy" ISKCON. He said, "We will lose all the buildings, and you will be killed in 24 hours." Great, I'll maybe be killed, meanwhile he will be hiding under a rock not helping at all, so the issue will die on the vine -- just as the Judas betrayer program wants. Yes, both the GBC and some of my dear God brothers are saying I should be stopped. OK fine, but what does that have to do with -- either there is a complaint from Srila Prabhupada, or there is not?

Krishna Kanta (IRM) also wanted me to move to the Carribean and forget the poison issue. He gave the same argument, we will lose the buildings. So, we have to save the buildings where Judas and Pontius Pilate are being worshiped, that is the priority of life? Not sure what their idea is?

Too bad, we made it past their gauntlet and went out with the issue anyway. Has ISKCON lost any buildings as a result of this issue, I have no idea? What is clear is that thousands and thousands of people NOW agree with us that there is a poison complaint, so once again, MOST people ended up agreeing with us.

The MAIN argument we keep hearing these days from the GBC folks -- and / or their "advisors" like Sridhara -- Narayana -- Gaura Govinda Maharaja folks -- and / or the dedicated disciples of Bhakta das like Prahlad das / HKC Jaipur et al. folks is -- that our forwarding all these issues "has created controversy and confusion." Nope, hundreds and hundreds of devotees have thanked us for bringing all this out and explaining and correcting the history.

The person in this video is also agreeing with us, these issues need to be openly discussed -- and straightened out, and that was our idea all along, and its getting around. Not sure ALSO why some of the people who have known about PADA for the past 20 years are STILL "confused" about some of these things, since we give tons of quotes, citations, eye-witness accounts, letters, conversations, tapes, documents, and so forth to back up all these points.

Yep, some people STILL tell us they have been reading our stuff for 20 years and they STILL complain its causing controversy. Well maybe these guys need to find a teen age kid from anywhere in the USA to be their acharya. Any Christian child from anywhere in the USA knows that debauchees and criminals are not, were not, and could not have been -- God's messiahs, gurus and successors. Ask them! The average USA citizen knows that PADA is correct, deviants and their cohorts on the GBC were never God's successors, full stop period!

Indradyumna swami is still trying to promote his idea that God's successors are most of the time illicit sex deviants -- if not criminals, well guess what, his sahajiya idea is not going to fly! Ever!

And when we are interviewed by people like karmi television, news media, book authors, scholars, the police, the FBI and so forth, they ALL AGREE our version of all this is THE ONLY version that makes any sense whatsoever. So it seems like people such as Indradyumna are fighting an uphill battle, because more and more and more people, including his own disciples, are self-evidently reading PADA and / or PADA affilated sites, and they are asking the SAME questions we raised on our sites years ago.

Prithu das is also now lecturing in India, trying to save the GBC's guru mantle, here is a guy whose program says acharyas are often debauchees, he is really going to save them! Yep, the way back to God is to worship illicit sex, drug addicts, fools, criminals, and debauchees.

As some have suggested, these people are flat out atheists. Anyway we are making progress, this is simply another indication. Amazing! There are still some people saying that our idea, that debauchees are not God's successors is "creating confusion." Seriously! OK so the Indradyumna bogus guru program ruined the USA with tons of horrific media exposes, then they fled to Russia, Baltics, and especially India, where people did not know about their criminal guru program so much. Well sorry, its catching up over there now, albeit a day late, but its coming there nonetheless. ys pd 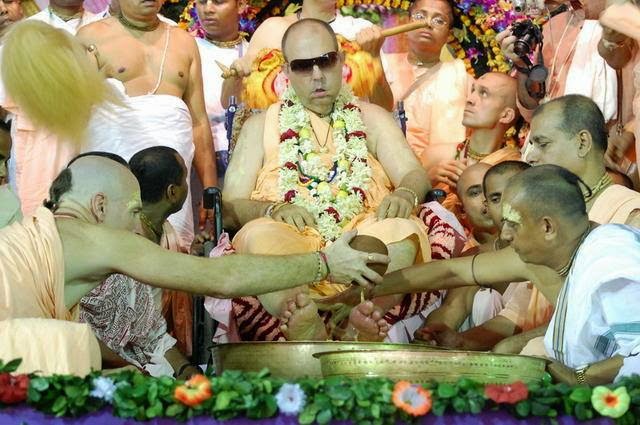 Indradyumna Swami's health update.BB Govinda Swami: Dear Friends, Please accept my humble obeisances. All glories to Srila Prabhupada. His Holiness Indradyumna Swami requested me to share some information with you. A few weeks ago Maharaja visited his skin doctor to check a lesion on his face. A biopsy was taken and the results showed that it was melanoma, a form of skin cancer. Srila Prabhupada taught us that "debt, disease, and fire should be extinguished immediately."

So, Maharaja traveled to Durban, South Africa to be cared for by our very old friend and surgeon Sunil Mohan Prabhu and a great team of expert doctors. Maharaja arrived in Durban on March 11th. On March 12th he had a PET Scan to determine if cancer had spread to any organs in the body. By Lord Krishna's grace the results of the PET Scan were perfect and the cancer had not spread to any internal organs.

Yesterday, March 13th, Maharaja was admitted to the hospital and underwent a surgical procedure called, "wide excision" to remove all the flesh surrounding the area where the lesion had been. At the same time the lymph nodes in his face, near the lesion, were removed to see any cancer cells had spread....
Posted by krishna1008 at 12:09 PM