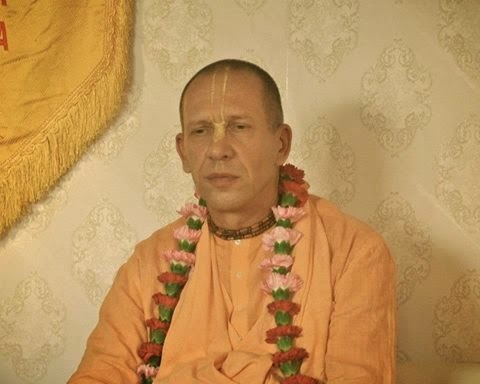 [PADA: Goody, it is finally dawning on more and more of these ISKCON leaders, that we need to emphasize Srila Prabhupada and his books, and not a pack of hokey "2/3 show of hands voted in" gurus and their bogus (and changed) books. This is basically our Prabhupadanuga idea all along, we need to keep Srila Prabhupada in the center, and we are glad more and more of these official ISKCON leaders are promoting our idea.

This also means by default, we should NOT emphasize the speaking and writings of these post-1977 upstart acharyas. Anyway, this is a good development. A few followers of Jayapataka have also tried to write PADA recently about this topic saying we are "spreading ritvik-ism," nope, your own people are spreading ritvik-ism, that is, that we need to focus on Srila Prabhupada. Your own folks are simply hi-jacking our idea. Sincere people within ISKCON will gradually adhere to our idea, and we hope this swami either is one already, or that he will become one of them. ys pd]

If you want ISKCON became a lot stronger than it is now, and if you are ready to take part in the "people's revolution," then here is the program of action for you. There are no policies and contradictions, it is easy to apply, it does not require big investments, but will benefit the entire society of devotees around the world. The program is the following: all members of the Krishna Consciousness Movement must read all the books of Srila Prabhupada.

Of course, many devotees are reading Srila Prabhupada's books already, but nevertheless, there are still many who do not read. There are numerous devotees who have already been initiated, but who still have not read all the books of Srila Prabhupada, and it looks like they are not even going to do it.

They have deprived themselves of the nectar of Srila Prabhupada, either for lack of time or because of the "sudras" mentality (too busy with hard work and earning money) or for lack of interest in philosophy; or they spend their lives watching TV or browsing the Internet, or read other books, other than the books of Srila Prabhupada. I don't want to say that viewing sites or reading other books are necessarily bad things but Srila Prabhupada's books should be the center of attention.

Once started, you won't want to stop. Close and regular reading of books of Srila Prabhupada elevates us to an entirely different dimension of spiritual life. On the other hand, if we don't read them - if we don't know why we do what we do - in our spiritual practice - most likely our faith rests on a fragile sentimental manner, which means that we cannot make progress properly.

Srila Prabhupada writes: "All the devotees of Krishna Consciousness Movement, must read all translated books (Caitanya - caritamrita, Srimad-Bhagavatam, the Bhagavad Gita and others); otherwise, after a while, they will only eat and sleep and fall from their position. So they will miss the opportunity to achieve eternal, happy life full of transcendent bliss." (CC Madhya, 25,278, comment)

Most of the original disciples of Srila Prabhupada are not staying so long in this world. This means that soon all the responsibility for the transmission of the teaching lineage will rest on the shoulders of the next generation. If you have not entered this doctrine through Srila Prabhupada, you are in the weak link lineage; and a lot of weak links will make the this movement the underdog.
Posted by krishna1008 at 3:21 PM