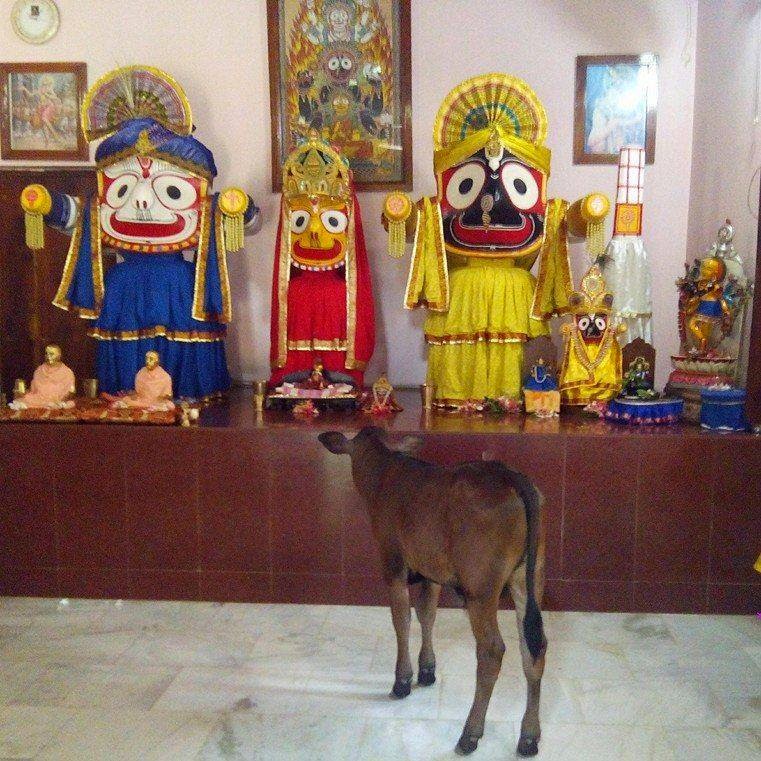 PADA: Yep, well it all depends, if someone mistreats Krishna's devotees, making these devotees wonder -- how they might have to forgive their mistreatment, this self-evidently begs the question, was the person who caused these offenses to the devotees himself a devotee? Or are we forgiving false devotees and thus wasting our forgiveness energies?

For example, Krishna does not forgive false acharyas, at least according to shastra, rather he sends them to the lowest destination. If He does not forgive these false acharyas, and He sends them down, isn't that the standard for His followers, thus we should follow His footsteps and not forgive these things either? A lot of crimes have gone on all over the world because the criminals were constantly being forgiven and re-forgiven, but this does not seem to have created a healthy institution whether ISKCON or the Catholic church.

My friend is a 40 year old cop and he says whenever there is a crime, they always look for an ex-criminal first, because the guys who already did past crimes are most likely the ones doing the current crimes now. Read: forgiving them simply made more victims, and that is what the cops think, forgiving bad people makes more good people suffer later on, because they will re-victimize another wave of victims.

That has happened in ISKCON as well, bad people were forgiven repeatedly and they just went on to cause more problems to another set of people later on. In sum, forgiveness needs to be done when there is genuine remorse, or else it won't work, and that is what Krishna also asks for, we have to be in full remorse or He does not accept our apology for being a renegade.

HD: A devotee is always forgiving because he / she understands the principle of desiring and deserving. It is a very complex matter just as the laws of karma cannot be fully understood so the reasons or causes of all these incidents is impossible to figure out. The majority of devotees within ISKCON are sincere but sometimes they are forced by past karma to commit sinful acts, even against their will. So, to say "bad people" is not true, they have been tricked by maya is all. We have to bear in mind that if we are mistreated then it is something we are deserving. Yes, institutional mentality is a good description but without the institution what then? The secret to overcoming all problems is to chant Hare Krishna without offence. Also, Haridasa Thakura set a wonderful example of tolerance and forgiveness. Finally, no one illegally occupied Srila Prabhupada's vyasasana.

PADA: If we allow bad karma / bad behavior to overtake an institution, the institution fails, and moreover it falls into bad media problems -- which ISKCON has suffered -- and is still suffering from. And this causes alienation and defection of its citizens and its support to dry up.

This is why in 1988 Lokanatha swami wrote that ISKCON has become a ghost town. And he asked rhetorically, "where did all the people go"? OK they went away due to being alienated, what else? We cannot maintain an institution when most of the members are being alienated away, and they are making a mass exodus.

As for the karma argument, when I said there was a child abuse problem, many people said "they are just getting their karma." The leaders and others did not want to help us address the issue, so it got worse, and eventually became a huge $400m lawsuit, a lawsuit from which the leaders ALL pleaded "no contest" to. So the leaders and rank and file for the most part did not want to help us address this issue, so this forced the courts and media to address it, and this has cost maybe $20m expenses so far as well as alienating most of the youth.

That means the society failed to protect its children, waiting for "karma" to sort itself out apparently? Another example is when an ex-devotee we knew started eating hamburgers, he told me the reason he can eat meat is -- that ALL the USA cows are ALL pre-destined to become hamburgers anyway, its their karma, so he is not committing sin, since the meat was destined to happen already.

HD: It is not a question of allowing, it is a question of realisation and understanding. We can go on and on about the past and we can find so many reasons to point fingers but the bottom line is that everything happens for a reason and we do not know the reason.

PADA: This is not the past? The GBC started a huge expensive lawsuit against the Vaishnavas who wanted to worship Srila Prabhupada, and the case is still pending, and is still costing tons of money, while many other devotees are sick and dying are not getting a drop of help from the GBC. The same pattern of banning, removing and kicking people out has not changed one iota in 35 years.

Many temples have major repair problems with much needed repairs, and yet the funds are not going to help the temples, or help the sick and elderly, or repair the buildings, the main use of funds is instead going to buy new Mercedes for lawyers, and that has been the problem all along, the GBC is now spending maybe $20 million dollars to kick out more people, after they already kicked almost everyone else out, they have to keep kicking people out.

They already kicked almost everyone out and now they are spending millions more dollars to kick out another wave of people. This is not in the past, its going on right now as we speak. My point is that it was already a ghost town in 1988, and now that they have discovered a few people are still left, they have to spend $20m to remove the few remnants as well, that has been their program and that is their current program today.

They do not want to help the sick and elderly, they do not want to repair the buildings, they want their lawyers to have new Mercedes so they can keep removing more and more people, and that has been the problem all along. They removed thousands and now they want to remove the few remaining people, and that is their biggest priority, kicking out the few folks who remain. That is going on NOW, not in the past? Some temples have rats and bad plumbing and so forth, but Krishna does not need to live in a nice house, lawyers need a nice house, that is a problem going on today. Who said this is all past when its going on now? ys pd

SD: I'll forgive what you have done to me but never will forgive those rascals so called leaders who have insulted Srila Prabhupada. I mean the GBC and the bogus gurus who soils this Earth.

PADA: The past is now the present, for example the GBC kicked everyone out of the San Francisco temple and closed the temple, there has not been a temple here for 20 years, and now they want to kick out more people and close more temples, that is all they do all the time. And Berkeley temple had 240 people and they kicked out all but a few and this temple almost went bankrupt and closed too. Its barely hanging on.

You cannot kick out all the people and run a temple, its not going to work. So they have been kicking people out all along, then closing the temples, and they are still doing that, except now they are spending millions of dollars to kick people out, so they are also wasting tons of money -- all for their aim -- of removing all the citizens of ISKCON so they can bankrupt the buildings and shut down even more temples.

We can forgive a bank robber and let him back into society, but if all he ever does is rob more banks once he gets out of jail, that means he has not changed, there is nothing to forgive, he is the same law breaker. Forgiveness applies to a person who has reformed, but they are worse than ever, they want to not only kick people out but waste millions of dollars and create horrible news media about this lawsuit to do that, this is worse than they ever were before. Instead of spending millions suing devotees, they should stop all this and forgive and move on. ys pd