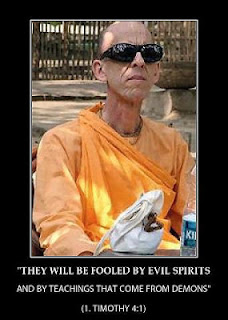 PADA: Thanks prabhu for sending me messages from the Purujit BLISS society saying "PADA is an old fart." Hah hah, maybe so, but that does not create a licence for anyone to re-write Srila Prabhupada's books? Worse, the argument of the Purujit BLISS society is the same identical argument of Jayadvaita swami, that we need to go back to the manuscripts and re-write all the books of Srila Prabhupada. The BLISS folks are simply parrots of the GBC's book changers.

This has created a big rift even within the BLISS society, with several former women followers writing to me that Purujit is a back stabber since he was taking donations from them -- to print his own books -- without telling them he was secretly making these books -- for years, and in the back room. So he misleads his own followers, and that is why a number of people said he is like the GBC folks.

And some of his former associates here in Berkeley are also saying they cannot support his Jayadvaita style re-writing of the books either. I really do not see any other Prabhupadanugas promoting his books? So Purujit has basically accepted Jayadvaita as his authority, and he has copied and pasted everything JAS says and he accepts that as absolute fact. We "old farts" do not.

Our idea is, that when Srila Prabhupada was here -- he empowered various people to do services, including editing. He also empowered people to distribute millions of these books, and he used these empowered books for his book distribution, and he cited these books all the time in his classes etc. He accepted and used these books, and so should we. So the idea that we should re-write the books is not being accepted more and more, rather the idea we should use the approved books is being accepted more and more. Purujit is on the wrong side of history.

And did we forget to mention, more and more people are complaining to us that Purujit has become the topmost disciple of the "old fart" Jayadvaita swami? So as a matter of fact, no, his edited books are not catching up people's attention. That's being rejected just like other re-writes are.

Yes, he is doing some other things right, but so are the GBC people. In any case, we can see the result, he just has the same few followers all the time. He maybe gains one, but then loses one, and he cannot make much progress because people see through these phony book changer folks. And that is why one of his former associates says "he has a big ego problem." To sum, book re-writes and changes are not being accepted by hardly anyone we know of at this point. ys pd