[PADA: This former guru seems to be suffering from some serious ailment, which has been arm-chair diagnosed by various devotees as: stroke, dementia, alzheimer, heavy metal poison (?), mental break down and so on. First of all, no one seems to mention that people who think they are another Jesus and they take the karma of disciples without authority are destined to have serious ailments?
Its amazing that almost no one ever even thinks of the consequences of this phenomena, despite so many of these gurus falling down, getting chronically ill, if not dying prematurely. A person who takes karma without authority "will have to suffer" as Srila Prabhupada told us. And how did you guess, they are suffering. Clearly, mental breakdown is one potential form of suffering which is what has happened to guys like Satsvarupa and others.
Anyway, thus the maharaja seems to be wandering around in a sad state. Another devotee, this one a rank and file from Italy, was arrested for not having a proper Visa and he was put into jail in Vrndavana. Again, the GBC authorities failed to make sure their sevaka had his proper documents and so forth. Meanwhile, some devotees involved in looking at this cannot help but notice that the few elite gurus like Jayapataka, and maybe few others, have all sorts of medical assistance, servants, opulent dwellings, unlimited travel expense to visit doctors and etc.
It thus seems like only the upper crust leaders of the GBC gurus program are getting their "old age maintenance" while other lesser leaders are sort of slipping through the cracks, never mind how many rank and file devotees are getting zero help from the society after doing years of service. Anyway, if anyone has some sort of ability to help this poor guy out, they are welcome to try if they are in the area. For starters, its looking bad having a senior person wandering around in such a state, of course -- not that the big elite leaders are that worried about their public perception. ys pd] 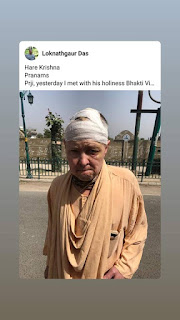 Dear PADA: Where are the corrupt ISKCON leaders? They won't even take care of their own liberated GBC stamped gurus? Should anyone end up on the street like this after giving their life serving ISKCON? I may not agree with him and what he chooses to do, but I don't want to see anyone end up like this.

Prji, yesterday I met with his holiness Bhakti Vishambhar madhav Swami maharaj who lives at Gaushala In Vrindavan now, his health is not well as he is suffering from mental disorder. Prji, he is left alone where no one takes care of his health or him. He went to Mathura railway station alone to go back to his country where he fell down from stairs. After talking with guard, I came to know that he keeps on roaming on road to get food and money. You are please requested to ask higher authorities to give him proper facility at his last stage of life, he has already given his life to Iskcon and Prabhupada' movement.

Whereas the GBC Executive Committee suspended Bhakti Visrambha Madhava Swami as an initiating guru effective May 8, 2017 due to his inappropriate and erratic behavior;

Whereas after meeting with Maharaja on February 8 2018, the GBC Body has decided that existing restrictions on him should be continued;

Whereas the GBC is the well-wisher of Maharaja and recognizes that he is not well and needs our support as well as appropriate boundaries;

The existing restrictions that Bhakti Visrambha Madhava Swami shall not initiate or receive any public worship will continue indefinitely or until further review by the GBC. In addition, Maharaja is not allowed to give any kind of formal class or speak as a representative of ISKCON at any ISKCON Temple or ISKCON related program.

We further advise and direct Maharaja to reside at the ISKCON Vrindavan Community, where he has ashram facilities, or at the ISKCON Juhu Temple, where the leaders are happy to accommodate Maharaja’s stay. A letter explaining the GBC’s concerns and recommendations about Maharaja’s health and status, as well as the well-being of his disciples, will also be distributed.

Dear Disciples and Well-Wishers of His Holiness Bhakti Visrambha Madhava Swami and other ISKCON Members,

Please accept our humble obeisances. All glories to Srila Prabhupada.

We write to you with saddened hearts.

As you well know, HH Bhakti Visrambha Madhava Maharaja has been faithfully and steadily serving his spiritual master, Srila Prabhupada, and the global ISKCON society for more than four decades. From his years of preaching and serving in temples in the United States and India, up to his taking sannyasa so that he could even more fully dedicate his life to Srila Prabhupada’s mission, Maharaja has been an example of loyal and humble service to His Divine Grace Srila Prabhupada.

But now, by the influence of time, Maharaja’s physical and psychological health have become compromised. We, the entire Governing Body Commission, offer heartfelt prayers to the Lord for Maharaja’s improved health. The material world is a difficult place, and we know that even very sincere Vaisnavas sometime suffer setbacks, unexpected diseases, and other challenges in their services.

In Maharaja’s case, the GBC Body has discussed his current health issues among ourselves and with Maharaja. We also took guidance from health care professionals in assessing what is best for Maharaja and his continued service in the ISKCON society.

In a spirit of service to Maharaja, as well as his disciples, we have decided that at this point in his life Maharaja needs to restrict his travel. We have formally advised and directed him to spend his time between two places, Vrindavan and the Juhu Temple, and not to travel elsewhere, except to Delhi for medical reasons. In Vrindavan, Maharaja has an apartment asrama where he can reside peacefully. At Juhu, the leaders have pledged to care for Maharaja whenever he comes there, up to six months or more each year.

In addition, Maharaja will, for the foreseeable future, not be allowed to give classes at ISKCON temples. The restriction placed upon Maharaja in May 2017 to not accept disciples also remains in place indefinitely. We use the word indefinitely to make it clear that it could be a long time before Maharaja recovers.

Because of his inability to care for new disciples, and because Maharaja was instructed to not initiate past that date, any initiations after May 2017 are invalid and not spiritually binding. We strongly recommend anyone who may have taken initiation from Maharaja after May 2017 to seek spiritual care from the many sources of shelter within the ISKCON community.

Those devotees, as well as all of Maharaja’s disciples, are encouraged to continue to serve and take shelter of our Founder-Acharya, Srila Prabhupada, and his ISKCON society. They are advised to take siksa, guidance, encouragement and the association of advanced devotees, gurus and friends within ISKCON, as they may need. And, of course, we know that Lord Krishna is always giving His support, help and protection to all of us from within our hearts as caitya-guru.

In closing, we request that all ISKCON devotees pray to Lord Krishna to give His continued loving shelter to Bhakti Visrambha Madhava Maharaja. We thank the leaders of ISKCON Vrindavan and ISKCON Juhu for helping to care for Maharaja. We ask all ISKCON devotees to give their care, love and assistance to the disciples and followers of Maharaja, so that they can continue without obstruction in their devotional service knowing that they have the love and full support of the entire ISKCON Vaishnava community.

Your servants on behalf of the GBC,