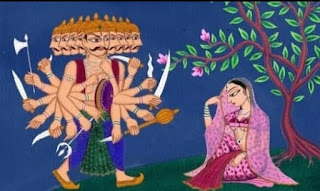 "Lord Krishna is Rama Himself, and wherever Lord Rama is, His eternal servitor Hanuman and His eternal consort Sita, the goddess of fortune, are present."

All of us know about Ravana, the demon-king of Lanka. All of us have been celebrating Dussehra and Diwali for pretty much all our lives, and are aware of how Ravana was killed by Lord Rama in the epic tale of Ramayana. Ravana has been portrayed as a villain who was known to have abducted Sita to Lanka, which led to Lord Rama killing Raavan. But there are so many things that I am sure you didn’t know about Raavan. Here we go.

Ravana was actually half-brahmin and half-demon. On the paternal side, Ravan’s father was Vishwashrava, who was the son of Sage Pulastya or Prajapati Pulastya (one of Lord Brahma’s 10 ‘mind-born’ sons). On the maternal side, his mother was Kaikasi, who belonged to the demon clan. Vishwashrava (also known as Vishrava) had two wives – Varavarnini and Kaikasi. His first born was Kubera (the god of Wealth, and Ravan’s step brother), whereas Kaikasi gave him 4 children, namely – Ravana, Kumbhakarna, Shurpanakha and Vibhisha.

It is said that Asura Sumali and his wife Tataka, who sought to increase their powers through various alliances with kings and rishis, decided their daughter Kaikasi was perfect for Vishwashrava, and they orchestrated her encounter with the Rishi. He fell in love with her and fathered Ravan. Hence, it is said that Ravan was a Brahmasura.

Ravana’s wife had a part to play in his Death

Ravan had decided to perform a powerful Yagya when Rama’s monkey army was defeating Ravan’s, and he was the only one left alive. This Yagya would have helped him turn the tables, and it was required for him to stay put and not leave his spot. Rama had sent Angad (Bali’s son) and his monkey army to annoy Ravan and ruin this Yagya. They failed to disturb Ravan.

As their last option, Angad dragged Mandodari (Ravan’s wife), and somehow Ravan still stayed put. Mandodari screamed at Ravan and shamed him by reminding him how Rama is at war to get his wife back, but Ravan couldn’t even move to save his wife. This made him move, and the Yagya was left incomplete.

How did Ravana become the King of Lanka?

Vishwashrava (Ravan’s father) was an excellent scholar, who earned great powers through Tapasya (meditation). Vishwakarma had created the ancient city of Lanka for Lord Shiva, which Vishwashrava later asked for as Dakshina from Lord Shiva. Lanka was inherited by Kubera, who was the actual ruler of Lanka and also Ravan’s step-brother.

Ravan and his brother Kumbhkaran performed penance, got all kinds of boons from Brahma with miraculous powers, and fought Kuber to occupy the golden city of Lanka.

How Ravana got his 10-heads

Ravan was actually a great devotee of Lord Shiva. After getting his education, Ravan went through a colossal penance at the banks of river Narmada to please Lord Shiva. In order to please him, Ravan axed his head off. But, somehow, the head would always grow back. This went on for a total of 10 times, which eventually pleased Shiva. Shiva granted Ravan the 10 heads that he sacrificed. These 10 heads indicated the 4 Shastras and 6 Vedas that Ravan had mastered.

How Ravana got his name

Ravan was not named so since Birth. His actual name was Dashanana or Dashagriva, which means a demon with 10 heads. After taking over Lanka from Kubera, Ravan went to meet Lord Shiva in Kailash, where he was stopped from entering by Shiva’s gatekeeper – Nandi. Ravan teased him out of annoyance which made Nandi furious. Nandi cursed him that Lanka would be destroyed by a Monkey (Wow!). Meanwhile, Shiva was meditating at Kailash.

To prove his devotion to Lord Shiva, Ravan tried to lift Kailash which angered Shiva. Shiva placed a toe on the hill in anger, and Ravan’s hand was crushed under the mountain. It is said that Ravan lets out a scream of agony. A scream so painful, that it practically shook the world. While being in pain, to calm Shiva down and please him, Ravan plucked out his own nerves and did a Tandav. This is when Ravan composed the Shiva Tandava Stotram.

Shiva, eventually pleased, released Ravan and gifted him a sword. He also gave him the name ‘Ravana’, which means “The one with the terrifying roar” because his cry in agony shook the world.

It is known that Ravan was half-demon and half-brahmin. When Ram’s army was creating a bridge to get to Lanka, they needed Lord Shiva’s blessing to go on and for the same they had set up a Yagya (worship or offering). But all of us know that the biggest devotee of Lord Shiva in the entire region was Ravan. Ravan, being half-brahmin was best qualified to perform the Yagya. Guess what? He did.

He actually showed up and performed the Yagya. He even gave Rama his blessing. Through his rites of Purohit, Lord Rama and his monkey brigade was able to construct the bridge ‘Rama Sethu’ and get to Lanka.

Ravana is believed to be dominant. It is said that he used to get attracted to women, and would go to any length to get the woman of his desire. Because of his weakness of women, he mistreated Rambha – Nalakuera’s (Kuber’s son) wife. Nalakuera cursed him that he could not touch any woman without her consent, and if he ever tried to, his head would explode into three pieces. This was why Ravan never mistreated Sita or forced her to marry him.

After years of penance, Ravan had asked for a boon of immortality from Lord Brahma. Brahma politely declined but said that Ravan’s life would be at his navel. On the 10th day of the battle between Ravan and Rama, Vibhishana (his brother) had told Rama to strike an arrow at Ravan’s navel. Thus, killing the demon-king.

Ravan had also acquired a boon from Lord Brahma and had beseeched that no god, demon, Kinnar or Gandharva could ever kill him. Call him egoistic or whatever, he forgot to mention human beings. And Rama was a human who ultimately killed him, and was also the 7th avatar of Vishnu.

Ravana knew about his own Death

Ravana was known to have killed King Anaranya of the Ikshawku dynasty, to which Lord Rama belongs to as well. While King Anaranya was dying, he cursed Ravana. He said that the son of the King Dashartha will eventually kill him. And guess what happened? Precisely this!

Basically, most powerful demons (or asuras) knew that they were sent to the world to play a particular role. Ravana apparently knew that it was his fate to die by the hands of an avatar of Vishnu (Rama was the 7th avatar). And this would help him attain moksha and also aid him in giving up his demon form.

Ravana was said to be a great maestro of Vedas and was an expert in Astrology. When his son Maghanada (better known as Indrajit or Meghanada) was to be born from his wife Mandodari’s womb, Ravana had instructed all the planets and the sun (I wonder how that works) to be in their proper position in order for Meghanada to be immortal. But, Saturn or Shani Dev refused to do so. Ravana got furious with him and attacked him with his mace, and even imprisoned him.

All of us know how Ravana had abducted Sita in a flying vehicle (popularly known as the Pushpaka Vimana). He had not only usurped Kuber’s (his brother) kingdom of Lanka but had also taken over his golden aircraft. It is believed that this Vimana could take different shapes, and could also travel at the speed of mind.

Ravana was the most powerful Asura of all Time

It is well known that Ravana was a great warrior as well as a learned scholar. He was also a brilliant practitioner of statecraft. He was a great astrologer of his time and has also authored the ‘Ravan Sanhita’, which is one of the most prominent scriptures of Astrology. He was also aware of esoteric practices, somewhat similar to black magic.

Ravana had mastered 64 different types of knowledge (or kinds of arts). From the skills of Kshatriyas to the holy books of Brahmans, he knew it all. In fact, Rama had once addressed Ravana as a ‘Maha Brahman’ while conversing. Ravana was also a master of tantra vidya and knew how to create an optical illusion of thoughts whilst fighting his enemies. He was regarded as one of the greatest living demons with wisdom.

When Lord Rama had killed Ravana, and Ravana was taking his last breath, Rama made his brother Lakshana to go and learn the art of diplomacy and statecraft from the dying Ravana. And Ravana is known to have taught Lakshmana whatever he could before dying.

The meaning behind Ravana’s 10 Heads

It has been depicted that Ravana had 10 heads.

It is said that these heads represent bad qualities, namely: Cruelty (Amanavta), Lust (Kama Vasana), Ego (Ahankara), Anger (Krodha), Injustice (Anyaaya), Attachment (Moha), Selfishness (Swartha), Greed (Lobha), Jealousy (Matsara), and Over-pride(Mada). So, in a way, the burning of Ravana’s effigy every Dussehra is a symbolic representation of cleansing of our soul from sins.

On this day, Lord Rama killed the demon Ravana. It was a triumph of good over evil.
Posted by krishna1008 at 6:47 AM