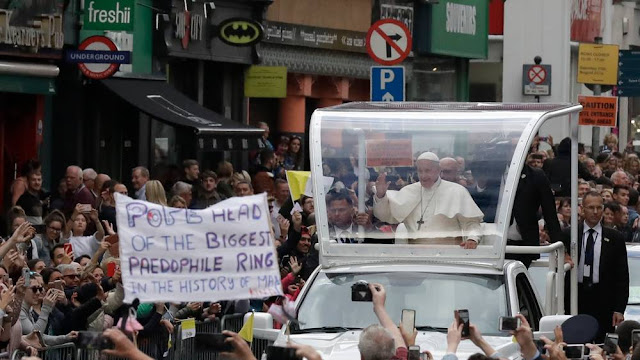 PADA: This is also what we wanted the Krishna devotees to do years ago, protest the pedophile infrastructure / criminal operation / problems in ISKCON. Instead, we generally got a lot of flack for "making offenses," "making things up," being "a liar," "criticizing Srila Prabhupada's dearmost senior leaders and / or his God brothers" and so on and so forth.

The rank and file devotees also have had a duty to do -- what these people are doing, make a protest to have the religion cleaned up. And take action to hold the leaders accountable for orchestrating these types of criminal programs to flourish under their managing process. Sulochana said unless the rank and file wake up and demand justice, things will not change substantially.

Yep, religion and -- pedophiles. That's great advertising for God's church and / or the Krishna religion as well. Its sad that religion has come to such a state, but hey, it is Kali Yuga and we cannot ever overlook that fact. Unfortunately for them, Srila Prabhupada says the people who misuse religion for exploiting others are -- gliding towards hell. Agreed. ys pd]