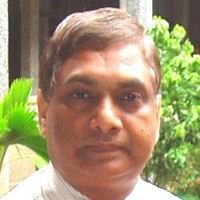 Daily number of rounds of Hare Krishna mahamantra 16. When, where and how did you come into contact with the Hare Krishna Movement? In Meerut, Bharat. Name the nearest or most frequently Visited ISKCON temple / centre and name few of the devotees whom you know. Delhi-Radha Parthasarthi.

Please describe yourself so that other like minded devotees can find you.Dr. Goel, trained in India and at Harvard in United States, is a physician, professor, senior advisor and consultant who has mostly worked in U.S. He is a pujari and lecturer on Bhagvad Gita, having been involved in ISKCON's missions in India, United States and West Africa.

Currently, Dr. Goel is endeavoring to emulate the trails left by the multitudes of sages and saints who showed how to do selfless service to the global Sanatana Dharma and Bharat Bhumi. This is his life's mission.What are your expectations from this community?

[PADA: Dr. Pradeep Goel is a typical GBC guru supporter, and is advertised as a disciple of Gopal Krishna swami. Recently he was advertising Radhanath's lectures. OK wait a minute, aren't these two the self-same fellows who helped bury "Srila Kirtanananda Swami Bhaktipada" (Keith Ham) in a samadhi in Vrndavana? Isn't Kirtanananda a known sexual predator, and the founder father of a criminal operation known as New Vrndavana, which was raided by the Federal Authorities for all sorts of crimes?

And weren't various New Vrndavana leaders implicated in various crimes, including inciting murders of dissenters? And weren't some New Vrndavana folks implicated in the $400,000,000 child abuse lawsuit? What is so wonderful about these folks, can someone explain? Why would anyone accept the folks who assist a program of burying sexual predators in a samadhi -- as their guru?] 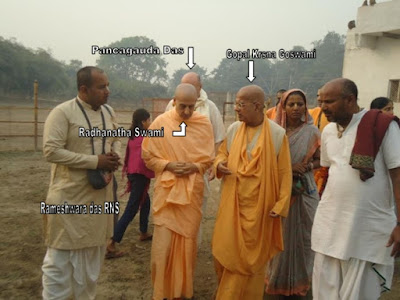 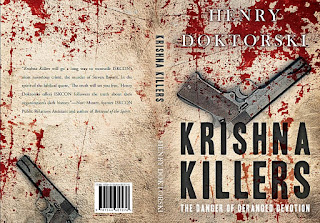 Too many crimes from the Kirtanananda / Radhanath regime
to detail herein / Read the above book for more details. 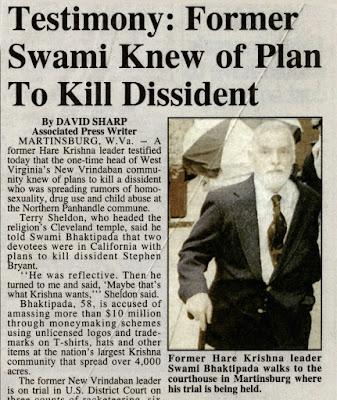 Pradeep Goel: Freedom for the Self, Service to the World

Swami Vivekananda gave this motto from the Rig Veda to the Rama Krishna Mission that he founded. This Mission runs many charitable hospitals and dispensaries in India and neighboring countries. I was fortunate to be of a little service in their humanitarian mission in the holy land of Vrindavan, near Mathura, the birthplace of Shri Krishna. Their hospital in Vrindavan sees over 1500 patients of all kinds every day and has 160 inpatients. All of their needs, medical, drugs, hospitalization, diagnostics, and meals, are almost virtually taken care of by the Mission. Please see some of the attached pics, and yes, do let me know if you want to serve there with your talents!

[PADA: With all due respect, Srila Prabhupada is not a fan of the Rama Krishna mission, nor is he a fan of various "swamis" who are opening hospitals. "Let me know if you want to serve the Rama Krishna operation"? And this is from a disciple of a GBC guru? As Srila Prabhupada says, there will always be sick and dying people in the material world. Therefore, the duty of a "swami" is to help the poor citizens get their SOULS out of the material world. In sum, a swami must try to save their SOULS and not try to save their temporary BODIES. These mayavadas are according to Srila Prabhupada going down in their future lives.

Radhanath swami has also been criticized (even by the Bhakti Vikas swami folks) for advertising various mayavada gurus in his book. And Srila Prabhupada says Rama Krishna mission is teaching the self-same mayavada / impersonalism. Why are the ISKCON GBC's folks allowing their leaders and / or congregation members to advertise these side-tracked programs, including various babajis etc. which Srila Prabhupada is NOT in favor of?

Pradeep Goel has also been advertising a link (from ISKCON Desire Tree) of hearing lectures from Mahanidhi swami, who has been characterized even by some of the other GBC's folks as a sympathizer with the Radha Kunda babajis. Again! Why are the GBC's folks allowing ISKCON to become juxtaposed with these programs,  which Srila Prabhupada criticized as false and / or "sahajiya"? The Rama Krishna mission, the babajis, the sahajiyas, the swamis opening hospitals, and all the rest of these things, are CONTINUOUSLY condemned by Srila Prabhupada. He warned us repeatedly to avoid these out - croppings.]

Premananda Gaura Dasa (Dr. Pradeep Goel) was until recently a university professor and health advisor to the American federal and state governments. Having entered the third stage of Vedic life, vanaprastha, he spends time now on preaching Krishna consciousness and mentoring devotees. He has been with ISKCON for close to thirty years and is a senior disciple of His Holiness Gopala Krishna Goswami.

[PADA: Fine, but if Gopal Krishna swami is our guru, and he is "voted in" to the GBC's guru illicit sex guru sampradaya, then what is that sampradaya? According to Jayadvaita swami, their guru sampradaya contains: illicit sex with men, women and possibly children. And now, we are "mentoring" people to understand that Krishna's guru parampara is chock full of: debauchees, deviants, drug addicts, sexual predators, orchestrators of child abuse, Vodka drinkers, Reno gamblers, and so forth? Why would any devotee of God want to be voted into such a guru parampara?

And worse, we are apparently preaching that the guru parampara from God is contaminated with all manner of deviants for 30 years? Where does Srila Prabhupada say the guru parampara FROM GOD is contaminated? Krishna says, acharyam mam vijnaniyam, the acharya is as good as My very self, or as pure as My very self. And Krishna's "very self" is what -- a bunch of debauchees and deviants? Or God's "very self" are the people -- voted in -- by the debauchees and deviants? Are any of these people even reading the Vedas? 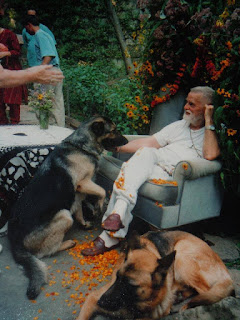 Mr. Dog Pada, belongs in a samadhi in Vrndavana?

And Pradeep says he is teaching sanatan dharma? Really? Sanatan dharma is preaching that Krishna's guru successors are a pile of debauchees and deviants and / or those "voted in as guru" by the same people who voted to reinstate illicit sex with taxi drivers as their Vishnupada acharya in 1986? Ooops! Sanatan means eternal, wow, a program of worship of debauchees and deviants as acharyas is -- the eternal religion of mankind? Nope! Its a VERY temporary deviation of the disciples of Kali Yuga. No one else EVER worships an illicit sex guru parampara except, the disciples of Kali yuga? When else is this deviation established?

Mr. Dog Pada is part of the eternal chain of gurus from God, and so are the people who buried him in a samadhi? And why wouldn't "Bharat Bhumi" Pradeep Goel know this is bogus, and yet we "Western" Vaishnavas have to remind these self-advertised Bharat Bhumi folks that -- they are supporting a deviating process?]


PADA would thus like challenge Pradeep Goel to a debate on these and other issues.

3) The GBC's folks like Jayadvaita say that their GBC guru parampara contains: illicit sex with men, women and possibly children. Why would anyone say that God's guru succession often contains debauchees and illicit sex predators?

4) How can the founder fathers of an illicit sex guru parampara "vote in" more gurus?

5) Why is ISKCON telling people to offer their bhogha to the members of an illicit sex guru parampara?

6) Should children be told that God's gurus and successors are often sexual predators, debauchees, deviants, drunkards, criminals and / or those voted into the above mentioned "guru sampradaya" group? Is this not illegal corruption of minors?

7) Gopal Krishna's wife Ekayani has started a web site complaining about Gopal Krishna's mis-treatment of her, and women as a class. Why would we want these types of people to be representing the parampara of Krishna?

8) Apparently, Pradeep Goel was formerly a Christian. Then he allegedly converts to Sanatan Dharma, and then he attacks the Christians:

Having had a first-hand experience of the terrible tactics of foreign missionaries in converting Indians to their religions, Dr. Goel has a special commitment to propagating Sanatana Dharma. More so now when the swarming from the so-called secular media and its degenerative values occlude the minds of young and old alike. The nexus of Marxists, Christians, and Muslims has successfully eroded the teachings of Sanatana Dharma in India's education system and thus our children are being raised in a so-called secular environment that is basically antagonistic to our ancient culture and history.

Dr. Goel is preparing for the next Ashram in a Vedic life, Vanaprastha. Swami Paramarthananda of Chennai, an ocean of knowledge on Sanskrit and Vedic scriptures, defines it as the ashram where one broadens one's sphere of thoughts and actions, to benefit the masses, and to purify one's Atma for a deeper association with the Paramatma. That's the path Dr. Goel seeks to undertake. Study of Sanskrit, mother of Indo-European languages, Vedas, especially Upanishads, and Bhagvad Gita are the top priorities while endeavoring to emulate the trails left by the multitudes of sages and saints who showed how to do selfless service to Sanatana Dharma and Bharat Bhumi.

[PADA: Wait a minute? Pradeep Goel is attacking the Christians, but they are VASTLY superior to himself! Almost ALL Christians know:  (A) God is pure -- therefore (B) God's guru successor (like Jesus) is also pure. Now he has gone way off the Christian's path to follow the GBC's idea, that (A) God is pure -- therefore, God's guru successors are often sexual predators, drunkards, debauchees, deviants, criminals, and so forth?

That means he has gone backwards? The Christians have the right idea, God is pure, and so are His successors. That is CORRECT.

And worse, the deviant messiah's class has "voted in" another wave of gurus, their "successors," namely Gopal Krishna. And members of this process have been promoting the Radhanath program, which is still in league with the Kirtanananda samadhi program. And worse, all of the people voted in by members of the first wave of deviants -- are the current gurus now? Or what?

9) How can deviants vote for acharyas?

These people are cheer leaders for the GBC's guru program, but not taking responsibility for their actions and history. Anyway! This is just pointing the way, we have many more questions. If Pradeep or his pals want to discuss these points, write us @ angel108b@yahoo.com.

Pradeep and the Gita:


PADA: Why would the GBC make debauchee and deviants acharya's programs, and then "declare war" on those of us worshiping Prabhupada, and have us banned, beat and assassinated for protesting their bogus process? ys pd