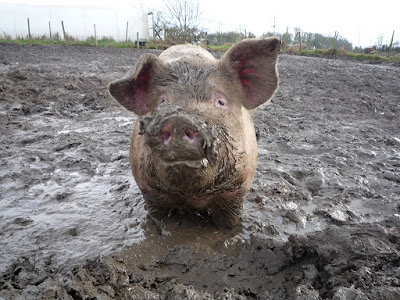 The Acharya is Buried Around Here?

Ajit Dasa: We demand that the holy body of Srila Gour Govinda Maharaj be returned to Sridham Mayapur where he himself decided to enter samadhi and that his Samadhi Mandir be built there and its seva be maintained by an independent trust of caring devotees.

The amount of abuse leading to the traumatic demolition of the Samadhi Mandir of Srila Gour Govinda Maharaj clearly expose that the temple authorities of the Krishna-Balaram temple have completely neglected the service of our beloved Acharya and are unqualified to continue it.

Srila Gour Govinda Maharaj entered samadhi under most auspicious circumstances in the holiest of holy places – Sridham Mayapur. The fact that he himself chose this holiest place for his samadhi should never have been doubted. Still, his disciples approached the senior-most Gaudiya Vaishnava of that time, Srila Bhakti Pramode Puri Maharaj, who said that naturally his Samadhi Mandir should be in Mayapur.

They disobeyed this instruction and took his body out of Sridham Mayapur to Bhubaneswar. They tried to justify this by saying they didn’t want to be dependent on the unfavorable ISKCON Mayapur management, but they could have easily established a separate trust in Mayapur. Removing a saint who just entered samadhi from of the holiest place without his clear instruction has never happened before and is senseless.

[PADA: Some folks said the reason they took his body out of Mayapura was that it was suspected he had been poisoned by GBC agents in Mayapura?]

When Maharaja's holy body arrived at the Bhubaneswar Krishna-Balaram temple, the then temple president, Caitanya-candra Das, denied his traditional final temple darshan by saying that a dead body cannot enter the temple.

[PADA: Well, hee hee, as long as you are a living body you are worshiped as the messiah of the jagat, the sum total of the demigods etc., but as soon as you are a dead body, you are a contaminated piece of manure. These GBC followers are a hoot. Of course, the body of an actual acharya would not be considered as a contaminated object not suitable to be taken in for darshan.]

This offence alone makes clear what kind of people the local leaders are. Instead of granting him a peaceful place away from the highway, they hastily buried him in a pit in his own straw hut Bhajan Kutir right next to the roaring highway.

The tradition would be to make a dedicated Samadhi Mandir, not mixing it with the Bhajan Kutir. There was an empty new building readily available - today’s Smriti Mandir. But to save that for other future purposes they buried his body in the straw hut.

For the last fifteen years, the floor in front of the hut has constantly been wet or flooded with sewage spills from nearby pipes. The stench was intolerable.

[PADA: Swell, so the body of their acharya has been kept under stinky and smelly sewage water, and in fact he was kept in an "intolerable stench" of sewage spill? Jeepers, please do not sign me up to be a GBC messiah, I'd rather not have them in charge of my bodily remains.

OK! My remains are not very significant.

And its not that I really care a whole lot where my remains will be resting, but its just that I'd rather not have my remains located under GBC managed sewage water spill samadhis, with no proper permits etc. -- just on principle. Hee hee! Well they placed a sexual predator in a samadhi in Vrndavana, that is like burying sewage itself. Burying sewage, having their acharyas remains swimming in sewage, that is the result of the GBC's wonderful expert managing process?

It is said that an offender to the Vaishnavas has to take birth as a worm in stools on the lower planets. Wow, and this guy's body ALREADY ended up with the worms in stools society -- here on this planet? Is this a coincidence, or a divine way of showing us what is the fate of these false acharyas?]

After years, the stench has cowardly been swept under the carpet by cementing the floor. That the holy body is also drenched in sewage was evident from the fact that the nearby well that reached deeper than the body was shut due to sewage contamination. After nobody was able to solve the flooding, some devotees demanded that the holy body be lifted out of this disaster but they were completely ignored by the management.

Funds was not the issue. To politically safeguard his own position after it was compromised, Murli Krishna Swami funded a new 7 cr Rs residents ashram while he and the management refused to care for our beloved Acharya’s holy body.

From the beginning of the temple, the management knew well that especially the land near the highway is under threat of town development.

[PADA: Apparently "the management" knew the city wanted to dig up the area to relieve the waste water / sewage spill problem too? Why was this not taken into consideration at the outset?]

A few years later the temple managers got the first warning, which they ignored. After the demolition of part of the hut by the government, devotees rebuilt it and tried to protect it with political means. But this year, due to need of prevention of intense flooding, the government was forced to demolish the entire hut besides other nearby buildings like a school.

Some devotees resorted to stone pelting and demonizing the government for executing their duty to prevent flooding, thus damaging the reputation of their society. Many other devotees, however, are appreciating the fact that the demolition is finally leading to the liberation of the holy body from the horrible fifteen years of sewage bath.

[PADA: Wow, the government had to liberate their acharya from swimming in the sewage. The government also had to help us liberate hundreds of children from their gurukulas with a lawsuit. Why does the government have an apparent better sense of managing than these people?]

The reason why ISKCON is out of the question to qualify for the seva of Srila Gour Govinda Maharaj is that their Governing Body Commission (GBC) are envious of his exposing their wrong position on philosophy and planned to evict him from ISKCON.

[PADA: OK except Gaura govinda maharaja is the person who has wrong siddhanta. GGM said we did not originate with Krishna in His leela, and that is mayavada according to Srila Prabhupada. GGM does not oppose the wrong philosophy, he is preaching the wrong philosophy in direct defiance of the acharya. Never mind GGM is voted into the GBC's sex with taxi driver's guru parampara, which will be re-assembling on the lowest planets according to shastra. Maybe the sewage link is a sign of their future?] 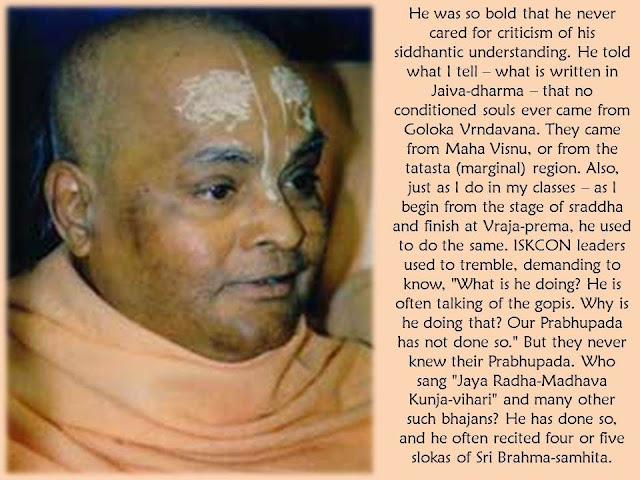 Srila Prabhupada says we originated in Krishna's leela or sport. GGM says no, that means GGM is WRONG!

This was already written in the minutes of the Mayapur GBC meeting that was supposed to have taken place the very next day after His Holiness entered samadhi there. We have two eye witnesses for this. The minutes were erased after Maharaj left his body. Some claim he was poisoned.

[PADA: Yep, and some think Suhotra was eliminated for "making waves" in Mayapura.]

One of his disciples pointed out that whatever happened, he himself decided to leave to protect his Godbrothers from committing the heinous offense of evicting him. All ISKCON temples are under the GBC who still hasn’t changed their wrong philosophy as proposed by Maharaj. Thus the only way Maharaj can be given service with actual respect, love and care is in a separate organization.

We, the global community of admirers of Srila Gour Govinda Maharaj, demand the immediate handing over of the service of his holy body to an independent trust of qualified and dedicated devotees to return him to Mayapur and to establish his Samadhi Mandir and proper worship there.

[PADA: What difference does it make where GGM is buried now? He is voted into the bogus GBC's sex with taxi driver's guru parampara, that is already a part of the giant sewage ditch of Kali yuga? That his samadhi has become officially in the sewage is a sign from above? Hee hee! Personally, I don't care if a pack of dogs eats my bodily remains, my only request is -- please do not place my body in the care of these fools. Lord have mercy! ys pd]