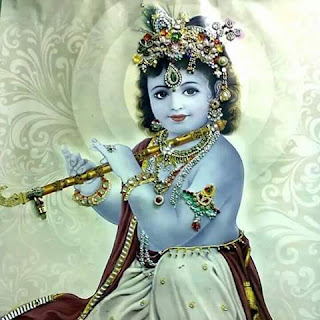 Nitya-baddha means ‘We Do Not Know’

Aside from this, BACK to Godhead means RETURNING back home from where we came from ORIGINALLY. The word MARGINAL means the soul has the INDEPENDENCE to CHOOSE if he wants to remain in Vaikuntha or to come to the material world. Otherwise there is no meaning to the word LOVE for Krsna. Love is NOT forced.

Other then the philosophy being explained in the context of SIMULTANEOUS ONENESS AND DIFFERENCE, one can NOT explain how the soul falls and does not fall reflecting the statements from Srila Prabhupada. I have explained this in my article, Apparent Contradiction and Reconciliation.

Please read below how Nitya-baddha has been explained:

“Nitya-baddha. This word is also technical. Nitya-baddha means ever-conditioned. There are nitya-muktas. Nitya-mukta means ever-liberated. In the spiritual world, there are also innumerable living entities. The… This material world is only one-fourth manifestation of Krsna’s energy, God’s energy. And the three-fourths energy is manifested in the spiritual world. So we can just imagine that in one-fourth manifestation of energy of the Lord, we are so many living entities which is impossible to count. Now you can imagine how many more living entities are there. But here we are conditioned and they are liberated. Those who are conditioned, they are called nitya-baddha, ever-conditioned. Nitya-baddha means we do not know when our, this conditional stage has begun. It is impossible to trace out the history.”

" There is a hint in the previous verse in the word lilaya, which means “for the pastimes of the Lord.” The Lord wants to rectify the enjoying temperament of the conditioned souls. It is stated in Bhagavad-gita that no one is the enjoyer but the Supreme Personality of Godhead. This material energy is created, therefore, for anyone who pretends to enjoy. An example can be cited here that there is no necessity for the government’s creation of a separate police department, but because it is a fact that some of the citizens will not accept the state laws, a department to deal with criminals is necessary.

" There is no necessity, but at the same time there is a necessity. Similarly, there was no necessity to create this material world for the sufferings of the conditioned souls, but at the same time there are certain living entities, known as nitya-baddha, who are eternally conditioned. We say that they have been conditioned from time immemorial because no one can trace out when the living entity, the part and parcel of the Supreme Lord, became rebellious against the supremacy of the Lord.”

" The eternally liberated living beings are in the Vaikuntha jagat, the spiritual world, and they never fall into the material world. Those in the material world are conditioned souls, nitya-baddha. The nitya-baddhas can become liberated by controlling the mind because the cause of conditioned life is the mind. When the mind is trained and the soul is not under the mind’s control, the soul can be liberated even in this material world. When it is liberated, one is called jivan-mukta. A jivan-mukta knows how he has become conditioned; therefore he tries to purify himself and return home, back to Godhead.”

“Regarding your question, in one sense both you and Mahapurusa are right. The fact is that after the dissolution of the Universe the living entities remain in slumber within Maha Visnu, and again when the creation takes place they are impregnated in their original position and they come out in different species of life. By gradual evolutionary process, when they come to the human form there is good chance of getting out of the repeated birth and death, and one can enter into the Spiritual Realm.

" But if one loses this chance he is again put into the cycle of birth and death. The conditioned souls are always within the Maha Visnu Form, whereas the liberated souls in Vaikuntha, they are engaged in the service of the Lord. Constitutionally every living entity, even if he is in the Vaikuntha Loka, has chance of falling down. Therefore the living entity is called marginal energy. But when the falldown has taken place for the conditioned soul is very difficult to ascertain. Therefore two classes are designated: eternally liberated and eternally conditioned. But for arguments sake, a living entity being marginal energy, he can’t be eternally conditioned.

" The Time is so unlimited that the conditioned souls appear to be eternally so, but from the philosophical view he cannot be eternally conditioned. Since we cannot trace out when we have become conditioned, there is no use of arguing on this point. Better to take care first how we can get rid of this conditional existence; as much as a patient should take care for treating his disease more, and less waste his time in finding out the cause of his disease.”

Devotee (4): I can’t seem to get a grasp on this at all. If we in our original constitutional position as part and parcel of Krsna, and in that position, that original position of full knowledge and full bliss and being in our eternal nature… Now I have some experience of how strong this material energy is and how maya works somewhat, but if I had known this and had this full knowledge, then I would have had this knowledge of how maya works and how I might fall.

Prabhupada: So how they did fall? They are from Vaikuntha. They are Krsna’s personal associates, keeping the doorkeepers. How did they fell down? Anyway, there is chance of falling down at any moment.

Devotee (4): Well, in his family they wanted to enjoy the material world.

Prabhupada: Whatever it may be, the fall down is there. So because we are living entities, we are not as powerful as Krsna, therefore we may fall down from Vaikuntha at any moment. Iccha-dvesa samutthena sarge yanti parantapa. Find out this verse.

“O scion of Bharata [Arjuna], O conqueror of the foe, all living entities are born into delusion, overcome by the dualities of desire and hate.”

Pusta Krsna: “The real constitutional position of the living entity is that of subordination to the Supreme Lord, who is pure knowledge. When one is deluded into separation from this pure knowledge, he becomes controlled by illusory energy and cannot understand the Supreme Personality of Godhead. The illusory energy is manifested in the duality of desire and hate. Due to desire and hate the ignorant person wants to become one with the Supreme Lord and envies Krsna as the Supreme Personality of Godhead.

" Pure devotees, who are not so deluded or contaminated by desire and hate, can understand that Lord Sri Krsna appears by His internal potencies. But those who are deluded by duality and nescience think that the Supreme Personality of Godhead is created by material energies. This is their misfortune. Such deluded persons symptomatically dwell in dualities of dishonor and honor, misery and happiness, woman and man, good and bad, pleasure and pain, etc., thinking ‘This is my wife, this is my house; I am the master of this house, I am the husband of this wife.’ These are the dualities of delusion. Those who are so deluded by dualities are completely foolish and cannot understand the Supreme Personality of Godhead.”

Prabhupada: So even in the Vaikuntha, if I desire that “Why shall I serve Krsna? Why not become Krsna?” I immediately fall down. That is natural. A servant is serving the master, sometimes he may think that “If I could become the master.” They are thinking like that, they are trying to become God. That is delusion. You cannot become God. That is not possible. But he’s wrongly thinking.

Vipina: Why doesn’t Krsna protect us from that desire?

Prabhupada: He’s protecting. He says, “You rascal, don’t desire, surrender unto Me.” But you are rascal, you do not do this.

Vipina: Why doesn’t He save me from thinking like that?

Prabhupada: That means you lose your independence.

Prabhupada: That is force. (indistinct) prema. In Bengali it is said “If you catch one girl or boy, ‘You love me, you love me, you love me.’ ” Is it love? (laughter) “You love me, otherwise I will kill you.” (laughter) Is that love? So Krsna does not want to become a lover like that, on the point of revolver, “You love me, otherwise I shall kill you.” That is not love, that is threatening. Love is reciprocal, voluntary, good exchange of feeling, then there is love, not by force. That is rape. The… Why one is called lover, another is called rape?

Vipina: But isn’t it by force anyway? If we don’t love Krsna, we suffer.

Vipina: So what is the choice?

Prabhupada: Choice is yours. If you are rascal, you don’t make the choice, the best choice. You suffer. The rascals, they suffer. And intelligent men, they do not suffer. If you are intelligent, then Krsna says that “You surrender to Me,” you surrender, then you are intelligent. If you are rascal, then you reject and you suffer. When a father says to his rascal son, “My dear son, you just hear me, do like this, you’ll be happy.” If he does not do it, he’ll suffer. There is no other alternative.

Vipina: Then He’s not fulfilling the desire.

Prabhupada: No, you wanted to enjoy–enjoy at your risk. Sometimes you’ll become the king of heaven, and sometimes you become the germs in the stool.

Prabhupada: Yes. No, that is the fact.

Vipina: Instead of under His protection, you enjoy at your risk.

Prabhupada: Therefore He advises, “Rascal, you give up all this enjoying spirit. You just surrender to Me, you’ll be happy.” But we don’t accept it. Therefore sometimes we are in the heavenly kingdom, sometimes as a worm in the stool. That is going on. That is your risk. What is that? bhuñjate te tv aghaṁ pāpāḥ?

“Work done as a sacrifice for Visnu has to be performed, otherwise work binds one to this material world. Therefore, O son of Kunti, perform your prescribed duties for His satisfaction, and in that way you will always remain unattached and free from bondage.”

“The devotees of the Lord are released from all kinds of sins because they eat food which is offered first for sacrifice. Others, who prepare food for personal sense enjoyment, verily eat only sin.”
Posted by krishna1008 at 6:55 PM