[PADA: Property and assets ordered seized and liquidated. While I am not entirely a big fan of these Jehovah's folks, its alarming that any alternate religion to the "Russian Orthodox Church" can be seized and shut down instantly. Not a good sign for "other religions" in that region, or for religious freedoms in general. And that could be bad news for other "smaller sects."

The Jehovah's witness folks sometimes visit me here, and I find them to be friendly, and at least very dedicated to their religion and serving Jehovah. This cannot be a major dangerous problem, unless you are a competing religion and they are taking people away from your camp.

Of course here in ISKCON we had the direct opposite rule, we were ordered that we had to allow our competing religions and camps into our society, like Sridhara, Narayan, BV and BP Puri maharajas, Ramesh Baba, Fakir Mohan, Babajis, Disciples of Prabhupada insulters like Madhava Maharaja etc., and we had to allow them to siphon off thousands of our ISKCON followers over to their camps under GBC decree.

ISKCON MAYAPUR getting ready to welcome the transcendental body of HDG BHAKTI BALABH TIRTHA MAHARAJA on the 21st of April 2017.

ISKCON MAYAPUR is getting ready to receive HDG SRILA BHAKTI BALLABH TIRTHA MAHARAJA's transcendental body. As per instructions of HH JAYAPATAKA SWAMI GURUMAHARAJA full ceremony of honoring an Acarya will be performed. Maharaja will be received with big Kirtan by devotees and special invocation and Sanyas suktas by the Gurukulis.

Then his transcendental body will be taken in procession to get Darsan of Srila Prabhupada's Bhajan kutir and thereafter will proceed to the main temple of Sri Sri Radha Madhav. Panca Tattva and Narasimhadeva for special Darsan. On the court yard will be given full honors by devotees with special Vaishnava songs and then procession will proceed to His Divine Grace's Math.
What!

We worship a disciple of Madhava, the person who yelled at Prabhupada for having the title of Prabhupada? These are the people we need to glorify in ISKCON? ISKCON has a policy, we get to worship EVERYONE ELSE except Srila Prabhupada? 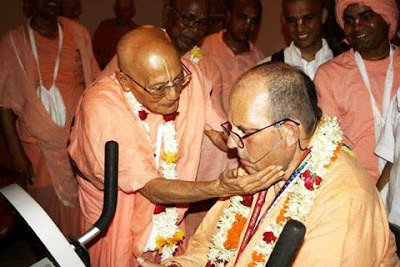 Invites in the competition

Of course then we also have guys like Krishna Kirtan das and his vociferous program of promoting Krishna Balaram swami, who is writing his own Bhagavatams -- self evidently, he thinks Prabhupada's writings are defective. So we need to allow the competition to Srila Prabhupada to re-write his books and take over his religion.

Our bogus leaders and their clones like Krishna Kirtan actually made the opposite rule, we have to allow in all the other competing camps and siphon our religion down to the bone, because they wanted to split our religion over to the competition. Maybe they should have had the same rules as Russia, other camps cannot operate in our domain. ys pd]