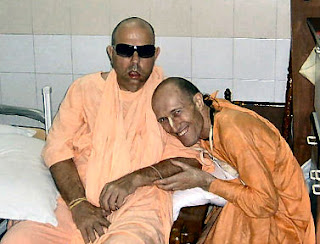 In Response to Bhakti Vikasa Swami

Apr 23, 2017 — ENGLAND — Bhakti Vikasa Maharaj, could you clarify your Position on the use of Corporal Punishment?

Please accept my obeisance. All Glories to Srila Prabhupada.

I am grateful that you have taken the time to reply to and for your Asirvaadam. I noted, however, that you omitted to address some of the more important points raised the first time around and that your reply published on the Sun is slightly different from the version you posted on your website.

For the benefit of the children involved, your disciples and for the ISKCON community at large, could you kindly clarify your stance? I apologize for my oversight in misquoting you when I omitted the word little in your statement "A little fear is good." I only listened to your class once and I didn't pay sufficient attention. Thank you for highlighting this.

[PADA: Well right, people who do not tow the line in the BVKS guru program are often banned, some have been beaten and some even killed. Has that increased the respect people are giving his regime? Nope! One ex-gurukuli told me that the gurukuli's program was like North Korea, the big shots were eating like Saudi Princes, and we got to eat old rotten moldy oatmeal, if we could find any. Yes, people fear North Korea, do they respect it? OK! Not so much ...]

While I agree with the first part of your statement, "Thus both state and religion invoke fear for the betterment of their wards." I don't share your conclusion. The intention in invoking fear in citizens is seldom as noble as you make out. More often than not, fear is just an expedient used by religious and secular authorities to control, exploit and manipulate the masses.

Frequently there are plenty of quotes supporting both sides of an argument. For this reason, rather than digging the Vedabase to find a quote that supports my current world-view and agenda, I prefer to attempt to gain an understanding of the overall body of instructions given on a specific topic. Just as an example, here Srila Prabhupada offers a very different perspective from the one you are promoting:

"Regarding your question should force be used on children, no, there shall be no forcing the children to do anything. Child should not be forced. This is all nonsense. Who has devised these things? If we want them to become great devotees, then we must educate the children with love, not in a negative way." (Srila Prabhupada Letter, December 10, 1972)

Using the fear of hell to inspire people to take up Krsna Consciousness is hardly ideal. I agree that material social norms are not a reliable reference for conduct because they tend to change whimsically with the times. When I mentioned social norms, I was making the point that, if our senior preachers (Indradyumna Swami and Bhaktividyapurna Swami) interact with young women and children in a manner that is not socially acceptable, this will likely have counterproductive effects on their preaching efforts. 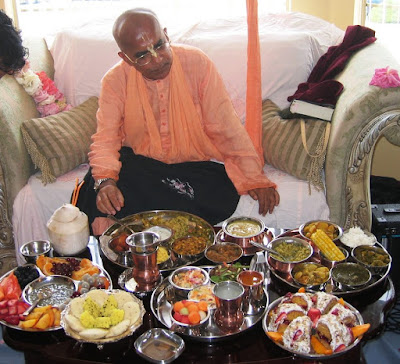 PADA: Gurukulis children reported eating old rotten food, what do these get to eat?


[PADA: Well duh, preaching that God's successors are usually debauchees is not going to win people over to a religion, no kidding! This may however attract sexual deviants, sexual predators, and criminals, which is perhaps why they preach that way?] 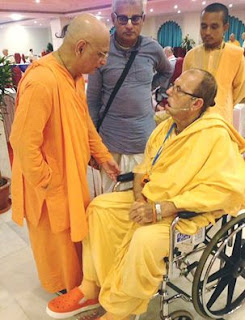 Isn't Mayapura a source of a lot of these complaints?

What kind of gurus are you guys producing? 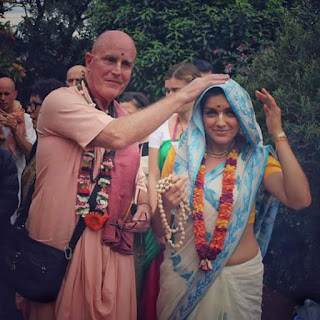 What? Returning the sins back to the disciples? 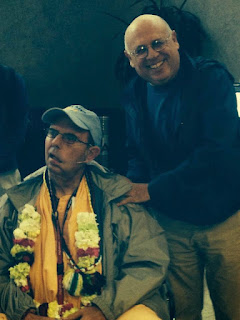 Have they fixed the Hrdayananda problem yet?

Hence I was highlighting the importance of being considerate and respectful of social norms. Their breach of social norms also happen to be unacceptable from the standpoint of the Vedic requirements of their Sannyas Ashram. I wasn't suggesting that we encourage abortion and divorce so as to gain the approval of the masses.

[PADA: Right, under the GBC and BVKS regime ISKCON has had a huge divorce rate, supposedly around 90 percent. In any case its way above the standards for the karmi society. The GBC regime is creating more divorce than the normal secular society.]

In your class you openly endorsed and at least minimized the gravity of the inappropriate behaviour of Indradyumna Swami and Bhaktividyapurna Maharaj. Is your approval aligned with the standard set by Mahaprabhu in the story of Chota Haridas? Your position in the class is in stark contrast with your more recent letter:

"I certainly agree that everyone, especially sannyasis, should be extremely careful in dealing with women and children. It is good to be vigilant, as you are, to highlight serious errors so that they may be rectified".

[PADA: These problems are not being rectified, rather they are going on for decades.]

As these statements of yours appear to be contradictory, could you kindly clarify once and for all, what is your view on the way these two Sannyasis have interacted with women and children? I am not saying this to put you on the spot. They have breached the code of conduct required by their ashram and you have endorsed it.

Try to imagine the far reaching repercussions this could have 50 years from today! A clear statement from you would help avoid confusion among your disciples in the future… or that you get misquoted by future generations.

I have taken an interest in the CPO for over 10 years now. I am aware that the CPO is flawed and that they have made many mistakes. The devotees that have served with the CPO over the years are, after all, fallible human beings like the rest of us, and for a number of reasons their service hasn't been ideal. To the best of my knowledge, cases where offenders were falsely accused or punished excessively are extremely rare.

Generally speaking, however, these shortcomings have favoured the perpetrators. Incidentally the cases you quote, Dhanurdhara Swami and Varkesvara Pandit are, along with Bhaktividyapurna Maharaj, some of the individuals that benefited the most from the lack of a reliable and efficient CPO. Another element these three cases have in common is that Sesa das, our Minister of Justice, Education and GBC, decided to interfere in their defence.

Just to give you a brief example: the CPO normally operates by a standard of evidence known as "preponderance of evidence" which is commonly used in many civil courts of law around the world. Adjudications are determined by weighing up all the available evidence. If the majority of the evidence points to a guilty verdict, the defendant is determined guilty, without the need for overwhelming proof or certainty of guilt.

This standard is used in CPO adjudications because the CPO has limited resources and does not have access to forensic investigators, but also because the penalties that the CPO can impose are very limited. For Dhanurdhara Swami's case however, Sesa das introduced a far greater standard of evidence known as "evidence beyond reasonable doubt" commonly used in criminal courts of law. This change effectively eliminated many statements and witnesses that would have otherwise weighed against Dhanurdhara Swami; this action alone greatly favoured his defence.

As if all of that was not sufficient, the GBC then issued an official apology to Dhanurdhara Swami for the troubles he underwent during the adjudication.

The 2015 investigation report for Bhaktividyapurna Maharaj that I mentioned is available here, under the name "Sri Radhe's Official CPO Case File". While this document is more focused on Sri Radhe's mishandling of the girls gurukula, under the supervision of Bhaktividyapurna Maharaj, it also covers the improprieties of Maharaj, and confirms many of the problems raised by the 2007 investigation.

Please note that the two investigations and adjudications that took place in the 2007 and 2015 were conducted and reviewed by an entirely different group of devotees.

Even if we want to allow for a very generous margin of error, we'd still have to accept that Bhaktividyapurna Maharaj's conduct over the years remained unacceptable.

If you take the time to read the history of Bhaktividyapurna Maharaj and the sanctions imposed upon him for his crimes, you may well agree that the CPO was exceptionally lenient with him.

You mention that the 2007 investigation report includes letters of appreciation for Bhaktividyapurna Maharaj. What you don't seem to recognise is that the abuse of even one child is unacceptable, and it disqualifies a teacher.

It is true that many have good things to say about Bhaktividyapurna Maharaj, and this certainly goes to his credit. This does not however, cancel out the dozens of children that he has directly and indirectly abused. You highlight the appreciations and completely disregard the several problems listed in the document as if they do not exist or are of no relevance on account of the fact that some parents were happy with his work.

You bring up the fallibility of the CPO as a justification to warrant your otherwise, seemingly arbitrary endorsement of Bhaktividyapurna Maharaj, but that's hardly satisfactory.

You rightly pointed out that making serious allegations that are not substantiated with concrete evidence can be perceived as abusive. Yet that is precisely what you have done; your support of Bhaktividyapurna Maharaj and undermining of the CPO is highly disrespectful to his victims. All you have offered to support your position are two unrelated (to Bhaktividyapurna Maharaj) and unsubstantiated articles you found on the Sun…

Taking into account the severity of the actions and negligence Maharaj is responsible for, unless you provide convincing and tangible reasons backed by evidence / documents that show how, in the specific case of Bhaktividyapurna Maharaj, the CPO made serious blunders that have unfairly affected the outcome of his case, or that the sanctions imposed were excessive and unwarranted, you will come across as lacking in objectivity and credibility. At the very least you will be seen as placing your friendship towards Bhaktividyapurna Maharaj above your duty to defend Dharma.

What troubled me the most about the statements you made in your class is that these are some of the very same arguments that have been used to justify / dismiss the abuse of hundreds of devotee children over the last 5 decades.

P.S. Could you also clarify what is your understanding of the appropriate application of the verse Bhagavad-gita 9.30?

[PADA: Yep, Bhakti Vikas swami types have created arguments "used to justify and dismiss the abuse of hundreds of devotee children over the past 5 decades." You got it! ys pd] 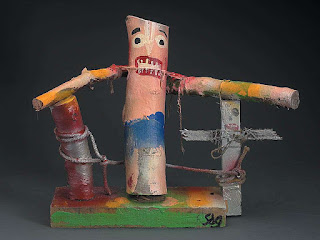