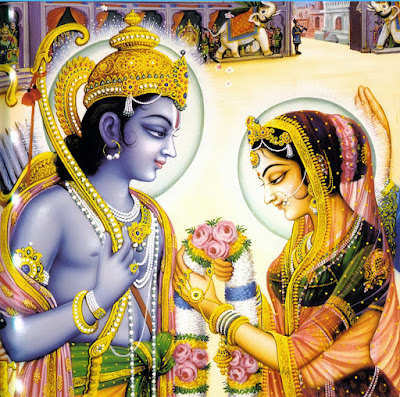 9.200: There, among the brahmanas, Sri Caitanya Mahaprabhu listened to the Kurma Purana, wherein is mentioned the chaste woman's narration.

9.201: Srimati Sitadevi is the mother of the three worlds and the wife of Lord Ramacandra. Among chaste women she is supreme, and she is the daughter of King Janaka.

9.202: When Ravana came to kidnap mother Sita and she saw him, she took shelter of the fire-god, Agni. The fire-god covered the body of mother Sita, and in this way she was protected from the hands of Ravana.

9.203: Upon hearing from the Kurma Purana how Ravana had kidnapped a false form of mother Sita, Sri Caitanya Mahaprabhu became very satisfied.

9.204: The fire-god, Agni, took away the real Sita and brought her to the place of Parvati, goddess Durga. An illusory form of mother Sita was then delivered to Ravana, and in this way Ravana was cheated.

9.205: After Ravana was killed by Lord Ramacandra, Sitadevi was brought before the fire and tested.

9.207: When Sri Caitanya Mahaprabhu heard this story, He was very pleased, and He remembered the words of Ramadasa Vipra.

9.208: Indeed, when Sri Caitanya Mahaprabhu heard these conclusive statements from the Kurma Purana, He felt great happiness. After asking the brahmanas' permission, He took possession of the manuscript leaves of the Kurma Purana.

Sage Valmiki described Sita’s extraordinary birth in the Ramayana. Sita was discovered in a groove of a freshly plowed field by King Janaka. So Sita – Daughter of Bhumidevi, got adopted by King Janaka and Sunaya.

When King Janaka was plowing a field to perform Yagna, Sita appeared splitting open the earth. The king found her as a baby girl in a golden basket. He saw her body all covered with dirt and was amazed. Having no children of his own, he put her affectionately on his lap. Overwhelmed with love for her, King declared her as his own child.

Raja Janak was the king of Mithilaa. Janak was his family name. His real name was Seeradhwaj. His wife Rani Sunaya brought up Sita as her own daughter.

It is revealed that Sita is Vedavati reborn. Vedavati was a pious woman who wanted to marry Lord Vishnu. To marry him, she gave up worldly life and became a hermit and built an ashram on a riverbank. Once while Vedavati was meditating, Ravana -the demon king, happened to see her.
He was infatuated by her beauty and tried to violate her. To escape from Ravan she jumped into a fire created for yajna. Before dying she cursed Ravaan that in her next birth she will be responsible for his death. In her next birth, Vedavati was born in Ravana's kingdom from a lotus flower. Astrologers predicted that she will become the reason for Ravana’s death. To save his life, Ravana threw the little girl child into the sea.
The child fell on the lap of sea-goddess Varuni. Goddess Varuni took the girl child to the shores and gave her to earth-goddess Pirthvi. Goddess Prithvi then gave her to King Janaka. As per Ramayana, Sita was found by King Janaka while plowing a field.
Sita imbibes motherhood from four great women:
From above stories we can make out that Maa Sita received Motherhood from four great women:
Mandodari – a great queen (Ravaan’s wife)
Varuni – goddess of sea
Pirthvi or Bhumidevi – goddess earth
Rani Sunaya – queen of Mithilaa (King Janaka’s wife)
Sita was blessed to receive motherhood from four great women. She also acquired qualities of these four legendary ladies. Her character and virtuous nature is clear reflector of qualities received from her mothers. Maa Sita – A Complete Woman: Goddess Sita is remembered for her virtues and attributes. She is always seen as a sign of power by each female.
Her entire life constitutes an example of idealism.

Sita is a perfect example of loyalty and morality.

Sita is regarded as the role model of wifely love and adherence to duty.

Sita is a brave woman of extraordinary brilliance.

Sita is a woman of immeasurable patience.

Sita is considered as the ideal daughter, ideal wife, and ideal mother, since ages.

It was at the time of Ashvamedha Yagya that the brave sons of Rama caught hold of the Ashva (horse). This resulted in the meeting of Lord Rama with his sons. After giving the responsibility of both the sons to their father, Goddess Sita refused to return Ayodhya. She gave up her mortal body to goddess Earth (Bhoomi) to relieve herself.

So at the end of the epic, Sita does not die, but rather re-enters a crevice of Mother Earth. “Earth, the Upholder.” The story of Mata Sita continues to inspire millions of people. She is the embodiment of purity and wifely devotion. Let’s inspire our souls from her life – story of an ideal daughter, ideal wife, and ideal mother. She is a complete woman in true sense.
Posted by krishna1008 at 7:06 PM