The leaders who have been accused of being involved in the conspiracy (so called) to poison Srila Prabhupada, I mean they were beyond a doubt some of his most loyal servants. Each devotee is different and a few may have had some different problems at some point, or they may have very distinct personalities. Some others may not have always appreciated their mood on certain issues, but they were so distinctly loyal to Srila Prabhupada and he was so appreciative of them.

So it really shows to the degree that Kali has entered our society, that the greatest attack - it's like in warfare - it's not the enemy which is so obviously different, antagonistic, keeps their distance, but the greatest enemies in warfare are those who do espionage. They are the most trained, the most powerful and the most dangerous because they enter into an environment with the idea of being like that, supporting it, while they have a hidden agenda. So beyond a doubt some of the major agents who are pushing this issue have been highly influenced by Kali.

[PADA: Wow! The evil doers are not the infiltrators, people like PADA who are exposing their evil ways (and the poison issue) are the agents of Kali. Anyway there are still a few folks out there who claim "no one listens to PADA," well sorry, even Bhakti Tirtha has had to address our issues.]

But we also have to appreciate that when devotees get so wounded, so disappointed with the institution, and most importantly with themselves, then the tendency is to overreact or the tendency is to scapegoat and try to find some easy justification for often their own failure or some ways to deal with the void they may experience in different ways.

[PADA: OK wait a minute, Srila Prabhupada's statements have nothing to do with our "own failures," when addressing -- his statements?]

So I think we have to look at it in both of those aspects, in that Kali has definitely entered, and entered in such a way to try to affect the actual nucleus, the heart of what our society actually is - the disciple's relationship to the Founder-Acarya, and this can cause people to question every aspect of Krishna Consciousness.

Now, taking a whole different look at this, we can say unequivocally, categorically, Srila Prabhupada was poisoned, and is still being poisoned, by our lack of dedication to his mission. We're poisoning him especially by our aparadhas and offences to each other and we're poisoning him by our perhaps lack of realising just how potent, or just how powerful this mission is if we allow Lord Caitanya, allow Srila Prabhupada to work through us, if we allow the parampara to do the driving. If we try to drive ourselves, try to do most things based on our intelligence, then there will always be some shortcomings.

So we can use this as a time for all of us in this society, to look closer, to see what role we have played that has added in creating an environment where there is so much in-house confusion. We all have to look at ourselves to see what we can do to be able to make a difference. Because where there is ambiguity, there is maya. Wherever there's lack of clarity in major areas, then maya finds a way to sneak in. So we have to see how we can function in such a way that doesn't cause people to experience this ambiguity, doesn't cause people to overreact.

[PADA: OK your guru parampara contains illicit sex, apparently poisoners, and many other deviations, you created this confusion, not us?]

Some people who are embracing this, they have some issues that are genuine about other things, then they stretch it to this and they overreact.

[PADA: OK but you are also not addressing our other concerns, knowing they are genuine?]

We have to look and see how we as individuals and as an institution, all different generations, and of course all different ashrams, we have to see what we can do to stop the present poisoning, and I mentioned those things that distract from our spiritual acceleration and the successful propagation of the ISKCON movement.

So I've tried to take it personally in that way and though I'm highly accepting that it's absurd to think that such things, or believe that such things could happen, especially with these loyal servants, and even thinking that Krishna would let his great devotee leave in such a way, but I'm taking it to heart and trying to see what things need to be done to be able to solidify our devotional culture so that Kali doesn't find so many ways to be able to come in.

As I've said, I've eagerly kept a certain amount of distance because of the, what I feel is, the absurdity and the pain of even thinking about such a thing and then reflecting on those who have been willing to embrace this idea. You see there's something about our consciousness that can allow us to accept something that is improper. There's a certain kind of consciousness that is eager to embrace such things and I mean, not to be offensive to Vaisnavas in general, whatever their position may be, but it obvious that the rat, you know, goes for the trash, or the roach it goes for the trash.

So it's a tendency like that. When there's proper cleanliness then we find that these species have no desire to hang around in such an environment, so similarly, too much of this kind of Kali aspect has entered, and we have to look close about keeping the house clean, so we don't attract or reinforce that.

It's just a general issue in our movement at this time, that people having been so disappointed in many ways; by leadership, people so dissatisfied by some of the weaknesses in the movement, child abuse, disappointment in their own lives, divorced, or haven't come up to the standards that they should, so in that disappointment and frustration, the people deal with their wounds and their pains in different ways, and in some ways it increases the problems rather than eradicates such problems.

[PADA: OK, supposing that people came to believe that Srila Prabhupada was poisoned due to all these malefic things mentioned above, how are you solving these issues?]
So I think that there is those that really do have good intent and are concerned as much as anyone about Srila Prabhupada and the movement, who have accepted this conspiracy or this theory, this idea that Srila Prabhupada was poisoned, but due to some genuine pain and therefore they are responding in this way. But I also feel that there are others who have been empowered by Kali, and so their mentality, their perceptions and their actions, the kind of chaos that it is bringing into the movement is beyond just normal deviation, its actually like an empowerment for destruction.

[PADA: Srila Prabhupada said that false gurus will destroy his mission, and they have. The poison issue is simply one facet of the false guru imbroglio, albeit perhaps one of the most important ones, or its the root of the evil tree of false gurus.

BTW! Srila Prabhupada said we neophytes cannot become diksha gurus and absorb other's sins, or we will be overwhelmed by absorbing other's sins and we will get sick, fall down, or both (or die if we are sick enough?). Bhakti Tirtha swami called himself "His Divine Grace Srila Bhakti Tirtha swami Krishna-pada" and he thought he was another Jesus who could absorb the sins of others, and then he got a fatal case of melanoma cancer.

Was this because Srila Prabhupada is right, we neophytes cannot absorb the sins of others, or, we will get sick, fall down, or both -- (or die, if we are sick enough from taking sins)? Why does Bhakti Tirtha swami think he is above the rules made by the acharyas? And isn't this one thing that is poisoning the society, neophytes posing as messiahs, thinking they are absorbing sins like Jesus? 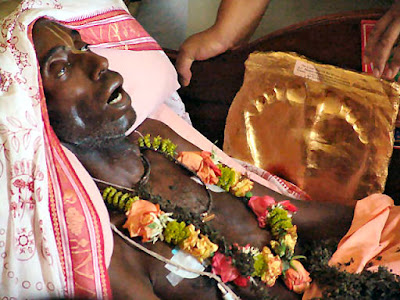