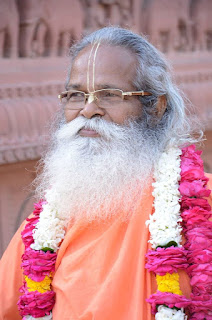 [Yes, as a matter of fact I am the Mahamangaleshvara Jagatacharya of, the Santa Claus sampradaya.]

Neither has Krishna Balarama swami?

He says there has to be a living guru, and Srila Prabhupada cannot be the living guru, but then -- he has not identified his living guru? He does not even have a living guru? And he wants others to worship no living person at all, but keep looking for someone somewhere, who allegedly exists, but no one knows for sure who this person is or even if such a person exists? Meanwhile, all of our people have a guru? So while Krishna Balarama swami has been sending people on a wild goose chase for 40 years -- looking for his alleged, no-named, non-existing living guru, we have been getting people to worship the pure devotee. He should not be sending people on a wild goose chase looking for an alleged living person, when he has no idea who that is? This is speculation, there is a person, maybe, but no one knows who that is?

Its a wild goose chase. In sum the tradition is, we cannot send people on a wild goose chase, we have to act a a bona fide representative of a NAMED guru and give people that NAMED person to worship, sending them on a goose chase is not helping them at all. They already do not know who is the guru, and you are increasing their ignorance, and telling them to go find a person, that you have not been able to identify in 40 years, so they will go to another religion that at least has a guru? You are sending people away from Krishna religion to go find a guru -- and that means they will have to go to a religion that has an identified guru, not Krishna's?

You guys have emptied out the temples sending everyone on this chase to look for the alleged but not existing guru ... We already went through all this with Krishna Kirtana dasa, he said we need to accept Krishna Balarama swami as an authority, the guy who has no living guru at all, but he says we need one? If we need one, why doesn't he? OK, he thinks he is special, he does not even follow his own rules, just like the GBC. Krishna Kirtana himself says that PADA is controlled opposition, well yes, we oppose people who worship nothing and no one. ys pd
Posted by krishna1008 at 6:35 AM