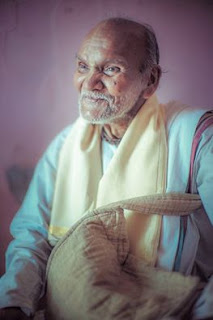 A very wonderful Gaudiya Vaisnava, Sanskrit scholar and member of the spiritual family of Srila Bhaktivinoda Thakura His Grace Sripad Fakir Mohan Das Prabhu has left this world on 18 November 2016 in Bhubaneswar. He was the dear friend of our beloved Gurudeva His Divine Grace Srila Gour Govinda Swami.

Sripad Fakir Mohan Das Prabhu was a naistika brahmachari, dressed in white who chanted one lakh of the holy name everyday. Did not initiate anyone, however he preached to one and all irrespective of class, creed, gender, colour or group affiliation.

Many senior ISKCON personnel went to him for clarification on philosophical points. He was the foremost scholar on the life of Srila Bhaktivinoda Thakura; he re-discovered the family Deities of Srila Bhaktivinoda Thakura, Sri Sri Radha-Madhava and was foremost scholar in Sanskrit with a Ph.D. and D.Litt in the Sanskrit language. He wrote over 35 books on the Sanskrit language. One of his main preaching points was on chanting the holy name and to worship the holy name of the Lord. He was quite emphatic on this point.

Sripad Fakir Mohan Das Prabhu, was the friend to one and all and had no personal ambition for name, fame, followers (he had no profile as such). He was extremely humble and this could be witnessed by anyone who had spent time with him. Sripad Fakir Mohan Das Prabhu’s daily program was to wake at 1.10 am and begin his research work, writing studying etc., then he would begin chanting his one lakh of the holy name. He lived very simply, he ate boiled rice, steamed vegetables and chapatti.

On one occasion, of which there were many, he went to a large function and at this function he was required to speak, and there would also be a great feast. As he only ate boiled rice and steamed vegetables he wanted to take that with him in a tiffin, however he was over heard as saying that if I take my boiled rice and steamed vegetables and not eat the feast they will think that there is something wrong with me. So he spoke, very wonderful hari-katha, and then opted out to eat the feast, which he later said was a little rich for him.

He would visit Vrindavan every Kartik and with him he would bring the Deities of Sri Sri Radha-Madhava. Then in the evenings he opened his doors to whoever wanted to come and hear him speak very wonderful Hari-katha.

His leaving is a great loss to planet earth.

Wasn't Ananta Vasudeva a "homosex and sex and sex" deviant posing as an acharya?

Didn't Ananta Vasudeva turn to take re-initiation from the smartas, and declare that the Gaudiyas are bogus?

Didn't Ananta Vasudeva commit suicide after he found out his wife had killed their son with poison, so the son would not expose that she was a prostitute -- all to "save the good name of the Gaudiya Matha"?

Why are the GBC and GGM "consulting" with ANY of these people, at all?

And then we have our friends like Tamohara who think PADA is bogus for "offending" Gaura Govinda Maharaja and his "shiksha guru authorities"? I am sorry to have to report this but, Ananta Vasudeva has severe mis-understandings of Srila Prabhupada's and Krishna's teachings. Anyway, its interesting that the ISKCON GBC promoted him by letting him lecture at their temples; some of the GBC were consulting him; some of them were promoting him (like GGM and Indradyumna swami); meanwhile -- no one explained why we need to consult with people who are connected to perhaps the worst bogus guru deviants in the Vaishnava community?

And why didn't the GBC censure Gaura Govinda Maharaja for promoting these folks inside ISKCON?

This is correct, the GBC, Gaura Govinda Maharaja, and many others, have turned to the Ananta Vasudeva line for "advice," much to the peril of ISKCON. That's all we need, lets consult with the same lineage that had dissenters beaten and killed, and whose guru married a prostitute and then committed suicide because his son was murdered to "save the name of the matha." This is the group we need to "consult"? We are not really holding any grudges here, lets hope he moves on to a happier place, but shastra tells us that the worship of bogus gurus, or promoting a policy that supports same, is not going to give us a happier future life. ys pd]
Posted by krishna1008 at 9:06 AM