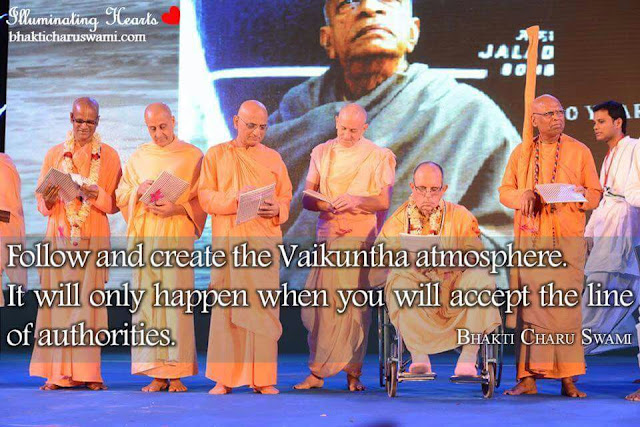 [PADA: OK, so Bhakti Caru Swami and many of his GBC pals say that God's guru successors, pure devotees, pure servants of Radharani, parampara members, messiahs, and in sum God's personal sevakas, are often -- degraded debauchees -- who are falling down into:

And the above program is what Bhakti Caru swami calls "A Vaikuntha Atmosphere"? Seriously! Well, we hate to have to point this out, but his idea of Vaikuntha seems to resemble the Church Of Kali Yuga?

Why does Bhakti Caru Swami think that his church of Kali Yuga is another Vaikuntha? This is really amazing, apparently every day BCS wakes up and he says, "hey, what abominable deviation can we add today as part of the behavior of the residents of Vaikuntha"?

OK, does BCS even have the foggiest idea of what Vaikuntha actually is? If this is Vaikuntha, no one wants to go there, is this his real plan -- to make Vaikuntha so bad -- no one will ever want to go there? What will Krishna's agents do to these people who offend Vaikuntha every waking moment of their lives? Vaikuntha is worse than hell, so no one wants to go there, and this is what BCS's gang is preaching to the public every day of their lives, i.e. they are doing everything they can to destroy people's faith in God and His pure devotees?
ys pd]