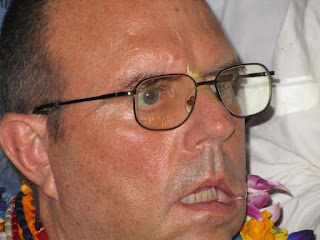 From Anon Das: In 1986 a GBC guru and Vaishnava acting as an initiating guru shared with me a terrifying experience he had the night before. His subtle body was taken to the gates of a specific hell by two messengers of Yama. This devotee was getting a horrible stench from inside that hellish place. He could hear loud screams of humans getting tortured and they were crying and shouting out for help.

That Vaishnav guru was shocked and was also trembling in emotional pain. The maharaj (guru) then heared an "akash vani" voice asking him, "So (name hidden), do you still want to initiate disciples"? Then all of a sudden the Vaishnav's subtle body was brought back to his physical frame.

He was sweating and crying profusely. After narrating the story to me, the vaishnav guru then asked me if the dreamlike experience meant that he was not qualified to initiate -- or that he was initiating unqualified disciples? I leave it to the reader to decide what the answer to that question is. Hari bol!

[PADA: OK well for starters, Vaishnava gurus are not taken to hell and questioned about their capability of initiating disciples. This particular GBC guru was very fortunate, he got a good warning not to continue on this path of being a false guru.

Its amazing to us at PADA that Srila Prabhupada says -- the diksha guru has to be able to absorb the sins of their followers -- or face severe reactions, including going to the most obnoxious regions after he dies, and yet a number of GBC people are standing in line for "the job" of being the next messiah, and taking on other's sins.

So, if they are not qualified to be gurus, then these "gurus" will take theirs and their followers sins with them into the next life -- where they will have to experience ALL the reactions to ALL these sins in hell. Bhakti vikas swami types are even more amazing to us, he says the GBC people are "doing to service" of being a diksha guru, as if absorbing the sins of others (like Jesus) is some sort of task like washing pots in the temple's kitchen. Yep, as a matter of fact, I am "doing the service" of being another Jesus. Really!

And a bank robber could argue the same way, I am "doing the service" of removing all the money from the bank, what is the problem? So all of this is heading for the most obnoxious regions, and sometimes even they know it. We do not sit in the seat of Vyasa as our "service," our service is to serve the guru and not hi-jack and take his post over.

Satsvarupa also says he has dreams where he is being tossed off a rocky cliff and he lands on the bottom getting pounded badly by the fall, but he does not die. Wow, exactly the descriptions of hell found in the Bhagavatam. Why would gurus have these dreams of hell?

Srila Prabhupada says that Professor Sannyal was very fortunate to have died after he began promoting the bogus guru program of the Gaudiya Matha, and in fact "Krishna killed him so he could not commit further offense." And yet Srila Prabhupada explains the other supporters of the false guru program were not killed, -- and that is because they were not as dear to Krishna, so they were allowed to continue on with their offense, thus cementing their doomed future even further.

Anyway, this is good news, more people are thinking about these issues. Goody! ys pd]