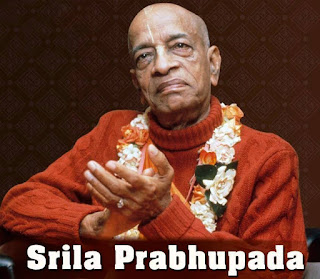 As the inappropriateness of changing of Srila Prabhupada’s books is becoming clearer and clearer amongst devotees, we are seeing an increase of activity aimed at putting an end to these book changes. In the midst of this, there are some who oppose the changes being made to Srila Prabhupada’s books yet at the same time insist that Srila Prabhupada can only act as siksa guru (instructing spiritual master) for future generations of devotees in the Krishna consciousness movement.

Such a blunt contradiction is indicative of one who is still compromised with the “living guru” philosophy propagated by self-authorized/voted-in gurus, or perhaps a political agenda to assume (or re-assume?) the post of guru. Either way, the entire purpose and proper utilization of Srila Prabhupada’s books is being suppressed by these types of people, who outwardly express the desire to preserve this utilization.

“If you miss one point, there is a mistake in your calculation. Regardless of what you add or subtract after that, the mistake is already in the calculation, and everything that follows will also be faulty. We cannot simply accept that part of the scripture we like, and reject what we don’t like, and still expect to get theresult.” (The Science of Self Realization 4: Understanding Krsna and Christ)

Changing Srila Prabhupada’s books cannot be justified on the plea of [so-called] improvement. This is where the principle of Arsa-prayoga comes in, which states that even if there are some discrepancies in an authority’s writing or if they are irregularly composed, they should be accepted and are accepted by purified men who are thoroughly honest (SB Preface / Letter 1-20-72). But in applying the principle of Arsa-prayoga one must also accommodate that changing Srila Prabhupada’s books breaks the authorized disciplic succession.

Srila Prabhupada’s books are nondifferent from himself in the deliverance of one who abides by the instructions prescribed in his books. In that way his books themselves are the current link in the disciplic succession (please see Srila Prabhupada’s Discipline). Under the circumstances, if one does not accommodate this, their use of the principle of Arsa-prayoga is incomplete; The entire calculation if off, having accepted one part of the scripture picture and not the other.

Proposing no changes to the books but rejecting their full diksa utilization holds the same effect as literally changing the books in that the full utility of Srila Prabhupada’s books is lost either way.

[PADA: The good news is that nowadays, almost no one in and around the ISKCON GBC circles wants to name "who" is their diksha guru, especially when debating with our Prabhupadanugas. Why? Because their GBC's diksha gurus are often tainted with: (A) Their own scandals, (B) Supporting or even reinstating "acharyas" who have been engaged in scandals, (C) Being "voted in" by persons engaged in scandals. "Yes as a matter of fact, the Alcatraz prison MAFIA members voted for me to be chairman of the Girl Scouts Cookie sale"! How swell is that?

Then again, how can a hospital janitor issue brain surgery certificates? So now we have a situation where for example Prahladananda is certified as the next messiah by folks like Hrdayananda, but Prahladananda has to banish Hrdayananda from ISKCON since he is a deviant. The person who certifies one as the next messiah, has to be banned from the post of messiah because he is a deviant? Then what is the value of one's certification?

This is of course one reason why the GBC does not advertise the fact that Radhanath took sannyasa from Kirtanananda, it muddies his certification. Although, it does explain why Radhanath buried Kirtanananda in the holy dham with the approval of other GBC. Radhanath was certified by a known sexual predator and certified criminal -- as the next messiah of the jagat. And so -- to return the favor -- he buries the person who gave him a guru certification in the holy dham, despite almost everyone knows Kirtanananda is a deviant, and the rest of the GBC kowtows and acquiesces.

This is why we find for example our friends "Arsa-prayoga" folks, like Ajit Krishna and Torben Nielsen, always talking about how Rocana and Kailash Chandra are their "living" authorities, but these fellows are unable to put together any basic public preaching programs, nor can any of them name their actual current living guru. And no wonder, these guys claim to be against the book changes, while they support and favor the bogus guru line that is changing the books. They are promoting the same people who changed the books and who put illicit sex into Vyasa seats.

Then again, for all we know these guys worship the tooth fairy, Santa Claus or the Easter bunny since they know as soon as they name their guru we will link him to the books changers etc. Otherwise! Why do ALL of them refuse to tell us who their living guru is?

OK because they are ashamed to admit who he is! As soon as they admit they worship a compromiser with the book changers and illicit sex acharya's program, they lose their whole argument. This is why Ajit and Torben keep saying, we worship a living person, but he has no name, no photo, no books, no preaching, no nothing. So they worship basically a zero, a phantom person.
They are even preaching that to the public, you have to worship a living person, but we do not, we refuse to actually name anyone that we worship.

So they worship a phantasm, they have no living guru and yet they order others to accept one. And Rocana and Kailash do the same thing, we need to worship their live guru, but -- they cannot tell you who he is. That is actually GOOD, it means we have them pinned down, they cannot identify their living guru because we can link their live guru to the GBC's scandal ridden guru line.

Thus basically Ajit and Torben are saying we no longer need to preach to the public, we need to live like isolated survivalist's away from devotees and devotional programs. That is simply not going to work, and its not working. Apart from that, Srila Prabhupada says, persons who cannot identify their guru are mayavadas. Also, the devotees are supposed to be gosthi-anandas, or preachers, and not bhajan-anandas, or living alone in the woods.

At least some in mainstream ISKCON have enough fortitude to identify their living gurus, like Hrdayananda swami, but his credibility is slipping badly and so are the other GBC's for not correcting his situation. And the GBC gurus behind the "women guru's" voting program are also slipping, as are the other GBC's gurus for not addressing and correcting these deviations.

We cannot preach on the basis that, we need to worship  -- no one -- as our diksha guru? We have asked Ajit, Torben, Rocana and Kailash who is their current diksha guru, and they all answer, "We cannot say." OK, there is none. That is why the ritviks are winning more converts and they are not, because at least the ritviks can identify who their diksha guru is.

Even the worship of a ghost is more advanced than worship of nothing, Srila Prabhupada says, people who cannot name their guru, that is complete mayavada. Anyway, that is why we are winning, we have a guru, we have his books, we have his temples, we have his programs, we have at least something going on. There is simply no statement in the Vedas, "all glories to -- nobody." ys pd]