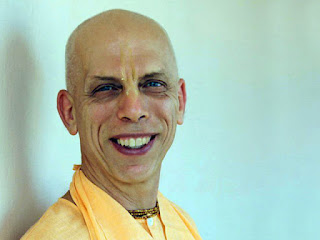 [Prahladananda swami's program says we must "follow the tradition" of Vaishnavism, which is -- we must vote in, vote out, suspend, monitor, remove, ban and even excommunicate our acharyas. The acharya has to be banned from his own mission? Where is this done in Vaishnavism? Why not admit that Prahladananda made a mistake when he thought Hrdayananda was the next messiah?

Hrdayananda stood up at the 1986 GBC meeting saying we need to keep a known sexual predator debauchee in the messiah / guru / acharya's seat, he should have been banned then. Instead, the GBC went along with Hrdayananda and they VOTED to reinstate the worship of a known debauchee as God's messiah. Why has Prahladananda's program endorsed and enforced the worship deviants, debauchees, sexual predators and criminals as their acharyas in the first place?

And Hrdayananda is not even being banned for making sexual predators into ISKCON's acharyas? That issue is not even being mentioned? When is Prahladananda swami going to finally say, we cannot allow people into positions of authority when they endorse debauchees as acharyas, ooooops, he cannot say that because he himself endorses the sexual predator acharya's guru lineage.

This is ironic, Hrdayananda voted in people like Prahladananda as acharyas and now the people he voted in -- are voting him out. Why doesn't the GBC know that debauchees are not, were not, and could not have been acharyas, and that gurus are not voted in, voted out, banned etc.?]

At our meeting on September 28th at Villa Vrindavana, Italy, the Euro RGB resolved that due to the difficulties which resulted from the recent visit of Hridayananda das Goswami, he should not visit any European yatra until these difficulties are resolved by the Global GBC.

In addition, the Euro RGB formally requests the GBC EC to place this matter on the agenda to be dealt with by the Global GBC Body no later than Mayapur 2016.

The Euro RGB is unanimous in its view that this matter has to be dealt with one way or another, by the Global GBC as soon as possible.

[PADA: Prahladananda swami, the main leader of the Euro RGB, has said that they can vote in as many gurus as they need to replace the ones who fall. OK that means, they are not going to bother to figure out if the gurus they are voting in -- are actually qualified to be gurus in the first place?

They are just going to vote in a pile of messiahs, and replace them when they are proven to be bogus. Since most of the gurus they have ALREADY voted in have ALREADY failed, what kind of messiah business is that? If most of your products fail, you cannot stay in business. Then they wonder why their temples are empty?

These guys keep saying they are following the tradition. Where in the tradition do we find that the acharya has to be banned from the institution he is the acharya of? Rather Srila Prabhupada says it is one of the ten offenses to consider that the guru is an ordinary man who falls down.

And the Euro RGB is asking the global GBC to get their act together and also ban Hrdayananda. Why didn't the GBC ban him a long time ago when he first introduced gay marriage? And why didn't they ban Hrdayananda in 1986 when his program reinstated a known debauchee as God's successor Vishnupada messiah?]

Srila Prabhupada..."These are Vedic injunctions. One must take shelter of a self-realized spiritual master, not a materially educated scholar or politician. One must take shelter of a niskincana, a person engaged in devotional service and free from material contamination. That is the way to return home, back to Godhead" SB 7.5.32 Srila Prabhupada's Purport