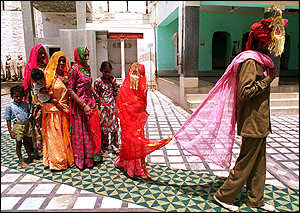 [PADA: Bravo for them, this sounds like a terrible policy. India needs to get more on track with Vairagya and Vidya and less infatuated with these material attachments. Srila Prabhupada says the false brahmanas of India have ruined the culture there by mis-using their power, which is causing people there to reject the culture and to become more infatuated with Western culture.

These false brahmanas and their false policies -- are clearly also exploiting others by assuming false power and status of brahmanas, and worse, they are ruining the name of the Vedic culture all over the world by supporting these wrong headed policies.

Yep, ISKCON leaders did basically the same thing. They created false gurus and they mis-used their powers, and this created huge scandals. And this discredited the name of Krishna and ISKCON, and caused people to reject and abandon the religion. The good news is that just as more and more India people are attacking the false spiritual leaders there, similarly many folks around ISKCON are challenging the false spiritual leaders in this program. Good progress! ys pd]
Posted by krishna1008 at 6:31 AM