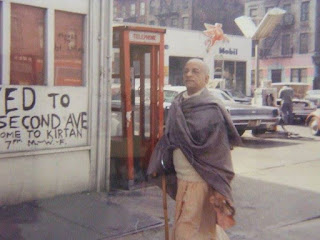 DD: The disciples of these new gurus are not by the real philosophy or knowledge, nor by the authority of shastras, but by the flickering, endless parades and festivals and unauthorised music performances, endless show performances... sentimental lectures based on the stories with wordly morality points. Those people who are attracted to that do not even see that those lectures does not have anything with shastras and that the speaker of that lectures does not follow Srila Prabhupada at all, that they are not even loyal disciples.

Because Prabhupada said "do what I do and say what I said". By such endless parades, Prabhupada's disciples who are mad after Prabhupada's position, attract only less intelligent persons who do not care to understand the truth and knowledge, even if being presented to them a million times. They simply do not have ability to understand. Therefore they do not care.

SD: Wow I cant believe how empowered you are to speak out so perfectly, its incredible and proof of the potency of Prabhupada's presence at every moment. Again, BIRDS OF A FEATHER FLOCK TOGETHER. I really appreciate your project's time and energy. Hare Krsna All Glories To His Divine Grace Srila Prabhupada

ST: Jay Srila Prabhupada.. Yes it is true according to vedic lifestyle, guru parampara is a hierarchical process of enlightening the disciple with the divine knowledge of God. And guru transfers his designation title of guru to his disciple when he is satisfied with the true qualities of his disciple that he follows in his real life.

Vedavyas dwipayan is the perfect example of a guru who compiled srimad bhagavatam and so many vedic literature to spiritually enlighten all the jivas of present and future age of kaliyuga in this universe for their overall welfare. The word Guru is a Sanskrit word composed by joining two divine sanskrit elements 'Gu' and 'Ru' ... Gu means the internal consciousness and Ru means Enlightenment.

In this way, Guru is better defined as those Personalities who enlightens the divinity of God in the consciousness of his disciples. Guru is that simple but great personality who himself follows his preachings in his own life and then he preaches those preachings to his disciples.

You yourself can think about the reality of those self proclaimed guru who smartly preaches the divine preachings of god to the disciple for the sake of certain material benefits but they themselves do not follow those preachings in their life. It is rightly said in Rig veda that it is easy to preach goodness but it is not so easy to follow the same goodness in their real life.

The really blessed gurus are those divine personalities who are followed by so many disciples because of his true divine qualities of humbleness, charity, modesty, truthfulness, bhakti, spirituality, and causeless love and mercy in his every moment of his life. Yes true Guru lives like a guru in every moment of their life. But the fraud gurus live like a guru for those moments of life when they want to impress their disciples by their artificial goodness which is temporary.

But such gurus live like an ordinary karmis in their secret personal life. This is what the real difference between the true gurus and the fraud gurus who look like a divine guru but they are not so in their secret personal reality.... In this dark age of kaliyuga the ' divine profession of Guru' has become a commercial profession of earning the name, fame, wealth and all the luxuries of life. Every great person pretends like a great guru just because they want to create a long chain of disciples who can really give him the donation on the regular basis to their ashrams and religious organisations and then they utilise that money of donation to live a intimate luxurious life secretly because they do not want to disclose their reality to their disciple ... therefore they live a simple satvik life of a saint publicly and in other time they live like an ordinary karmis in their personal life secretly......

ST: Hare Krishna .. I am almost nothing in this universe. Everything in this universe is the causeless mercy of sri Krishna Sacidanand Jagannath Jagadishwaram. All the glories to all the devotees of krishna who are always engaged in the devotional services of krishna... Harinama Hari bhakti, Hari Katha, Hari bhajan, Hari dhyana, Hari prema, Hare Krishna Mahamantra ki Jay Jay..

PD: Gurus are also not voted in, voted out, suspended, monitored, chastised, removed, excommunicated, reinstated, arrested for crimes, engaged in illicit sex, and so on, actually the list of previously unknown guru species in ISKCON since 1977 is endless. ys pd
Posted by krishna1008 at 6:31 PM