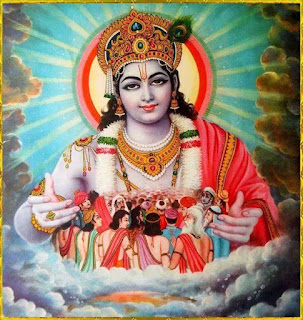 (ON THE PURE RELIGION OF BHAGAVATAM)

Numerous religious works have been written in the world. Indian rshis, after long and careful deliberation on the ultimate goal of life, have composed numerous books on this subject. Of all these books, Srimad-Bhagavatam is the most important.

This monumental work consists of eighteen thousand verses. All the basic truths of the world, namely sarga (original creation), visarga (subcreation), sthan (planetary systems) posan (protection by the Lord), uti (the impetus for fruitive activity), manvantar-katha (changes of Manus), isha-katha (science of the Supreme Lord), natrodha (winding up of the material creation and going back to the original abode), mukti (liberation) and asraya (the ultimate shelter), are analyzed there, sometimes in the form of a direct instruction, sometimes in the form of historical anecdotes, etc.

Amongst all these truths, asraya is paramartha is the ultimate and absolute goal of life. The position of asraya is extremely esoteric and cannot be confined in any bounds. Although asraya-tattva is a self-evident truth for the pure jiva-soul, it is very difficult to clearly explain this supermundane knowledge to man who is enslaved by matter. That is why, to make mankind properly understand the tenth subject, the compiler of Bhagavatam made it compulsory for the reader to carefully go through other nine subjects first.

In Bhagavatam the eternal function of a soul has been defined as sattvata dharmma, or pure unadulterated religion. The other name of such kind of dharma is Vaisnavism. Bharavahi-Vaisnavas [those devotees of the Supreme Lord, who only carry the burden of external rituals] form one of the five principle sects, namely, Saktas [worshipers of Sakti-nature, personified as Mother], Sauras [Surya-, or Sun-worshipers], Ganapatyas [worshipers of Ganesh-god with a half-elephant, half-man body], Saivas [devotees of Siva] and Vaisnavas [devotees of the Supreme Lord Visnu].

However, Saragrahi-Vaisnavas [devotees, drinking the nectarean essence of Love of God] are rare, and consequently above all sectarian designations. The above-mentioned five sects, cultivating transcendental aspirations, are spread in the land of India under different names, which are given after their characteristic features. A human being has two kinds of propensities: one aiming at mundane gain, and the other aiming at a supermundane ideal.

The mundane, gain-seeking propensity gives rise to such activities as body-preservation, building of houses, marriage, giving birth to children, study, earning money, materialistic science, fine arts, state affairs, pious acts, etc. The activities of humans and animals are similar in many respects, but the progress of human civilization is much more refined than the instinctive movements of animals. However, those who are absorbed in mundane development, but make no effort to take shelter in the natural function of a human being, deserve to be called an animal, standing on two legs. By natural function, the function (dharma) of a pure soul is meant. In the pure state of a soul, the realization of a soul's natural duty is clear and requires no argument.

In the conditioned state of the soul, the natural religion takes the shape of transcendental aspirations. If all the above-mentioned mundane aspirations become subservient to the transcendental ones, and promote the cause of nonmaterial progress, only then is their existence justified; otherwise, by their own strength they are unable to elevate one to the loftiest state of existence. When slight symptoms of spiritual aspiration become traceable in the life of a mundane gain-seeker, it is called "the awakening of God consciousness."

There are innumerable stages between this awakening state and uttamadhikar — the perfection of Love of God. The quest for Brahma, or fundamental cause of all causes, in the material world is defined as Sakta-dharma. The characteristic feature of this religion is attributing the creation of the material world to Prakrti (female Nature).

The practices of Saktaism are fit to give rise to the first transcendental aspirations in a man. People engrossed in sensual development and apathetic towards seeking the Absolute Truth may be enticed by the practices and way of life of a Sakta, and in this way may be drawn closer to the highest object of life. Sakta-dharma is the soul's first step towards transcendental realization, and it is highly beneficial for that category of men.

When God consciousness grows stronger, the realization that Heat is the pre-eminent power affecting all activities in the material world, then comes the worship of the source of all heat—the Sun (and one rises to the second stage). Thus Saura-dharma begins. Then one comes to realize that heat is a dull mundane force, and seeing the super-excellence of animal consciousness, takes to Ganapatya-dharma-the third gross stage of soul's development.

The fourth gross stage is the worship of purely human consciousness in the form of Siva-Saiva-dharma. Coming to the fifth stage, an individual particle of consciousness (the jiva) serves the Personality of Supreme Consciousness. This stage is called Vaisnava-dharma, or Vaisnavism. This is a natural five-fold division of religion. That is why all the different religions which are introduced in India and all over the world in different ages under different names, necessarily fall into one of these five categories.

Christianity and Islam are similar to the Vaisnavism as the fifth stage in the religious progression. Buddhism and Jainism are nearly the same as Saiva-dharma - that is, a scientific analysis of religion. Those, who claim their religion to be the only true one, and claim that other religions are heresies or superstitions, are possessed by prejudice and are unable to find out the truth.

Unadulterated or non-sectarian Vaisnavism is the natural religion. In other words, it is the eternal function of a soul. However, devotion which may be observed in Mayavadis, who consider devotion to the Supreme Lord to be nothing more than a temporary means to achieve the state of being one with the impersonal Absolute, and who consider the Name, Form, Qualities and Pastimes of the Supreme Lord to be the products of illusion, is nothing but an external imitation of a natural religion.

Only then, this sectarian Vaisnavisrn turns into unadulterated devotion, purified of externals and free of the ideas of Mayavada. Different lines of unadulterated Vaisnava thought, such as Dvaita [dualism], Dvaitadvaita [dualistic monism], Suddhadvaita [purified monism], and Visistadvaita [qualitative monism], just show the variegatedness of Vaisnavas' moods and approaches. Between these lines there is no clash of principles, and consequently no sectarian opposition. Mayavada is the perversion of true devotion. Vaisnavas, who have accepted the principles of Mayavada, are not pure Vaisnavas.

The crown jewel of all the Holy Scriptures, Srimad Bhagavatam, is as eternal and ancient as the Vedas themselves. By the words tarankurah sajjanih, the eternity of Bhagavatam was established by Srila Sridhara Svamipad. Bhagavatam is accepted as a mature fruit of a desire-tree of the whole Veda. From Pranava [om-kara] Gayatri arose, from Gayatri-all the Vedas, from the Vedas-Brahmasütra, from which Srimad Bhagavatam manifested itself. All the inconceivable truths of the Supreme Cause of all Causes having shiningly made themselves visible in the jiva's spiritual trance (samadhi) and this Scripture of Paramahamsas, ascended like a brilliant eternal conscious Sun of concentrated bliss.

Those having eyes may see; those having ears may listen; those having mind may ceaselessly meditate on truths, expounded by Srimad Bhagavatam. Only those who are blind with partiality are deprived of tasting the sweetness of Bhagavata. May the Supreme Personality of Godhead dispel their blindness with His merciful glance. Saragrahi-Vaisnavas have delineated the following principles of eternal religion. Some minor changes may have appeared in these definitions in the course of time.

1) The Supreme Soul is the Plenary Consciousness, the All-mighty Lord, compared with an eternal conscious Sun of concentrated bliss. Jivatma-an individual soul-is an infinitesimal particle of consciousness and is compared with a ray of this Sun.

3) The Material world is a perverted reflection of a conscious spiritual abode, and is a place of happiness and distress, which are just a perverted faint resemblance of pure bliss.

4) Jivatma has no permanent connection with the material world. This world is but a temporary residence for enslaved jivas. Jivas, conditioned by the inconceivable power of the Supreme Lord, are traveling all over the universe, some addicted to material enjoyment, some in search of spiritual fulfillment.

5) The spontaneous flow of affection towards the Absolute Truth is a natural function of a soul. A tendency to enjoy sense pleasure is a regrettable perversion of this natural dharma in the conditioned state of a soul.

6) To be established in the natural position is called liberation. It is achieved by introspective cultivation, that is, by devotion (bhakti).

7) The ways of cultivating the natural religion are multifarious, relating to different stages of a jiva's development.
Posted by krishna1008 at 12:28 PM