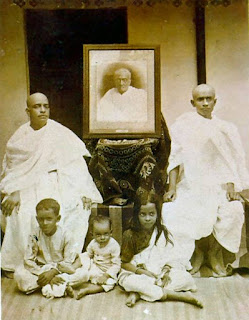 "Unless one is favored by a pure devotee, one cannot attain the platform of devotional service. To say nothing of kṛṣṇa-bhakti, one cannot even be relieved from the bondage of material existence.

Pious activities bring about material opulence, but one cannot acquire devotional service by any amount of material pious activity — not by giving charity, opening big hospitals and schools or working philanthropically. Devotional service can be attained only by the mercy of a pure devotee. Without a pure devotee's mercy, one cannot even escape the bondage of material existence. The word mahat in this verse means "a pure devotee," as Lord Kṛṣṇa confirms in the Bhagavad-gītā (9.13):

"O son of Prtha, those who are not deluded, the great souls, are under the protection of the divine nature. They are fully engaged in devotional service because they know Me as the Supreme Personality of Godhead, original and inexhaustible."

One has to associate with such a mahatma, who has accepted Krsna as the supreme source of the entire creation. Without being a mahatma, one cannot understand Krsna's absolute position. A mahatma is rare and transcendental, and he is a pure devotee of Lord Krsna. Foolish people consider Krsna an ordinary human being, and they consider Lord Kṛṣṇa's pure devotee an ordinary human being also.

Whatever one may be, one must take shelter at the lotus feet of a devotee mahatma and treat him as the most exalted well-wisher of all human society. We should take shelter of such a mahatma and ask for his causeless mercy. Only by his benediction can one be relieved from attachment to the materialistic way of life. When one is thus relieved, he can engage in the Lord's transcendental loving service through the mercy of the mahatma.

[PADA: These are very important instructions. A mahatma must never be considered as an ordinary human being. Unfortunately, the entire concept of "acharya" has been watered down in modern ISKCON to that of an ordinary human being, or less that an ordinary person, since the ISKCON leaders are now saying that the Lord's acharyas are often fallen, degraded and debauched persons who will require constant -- monitoring, censure, suspension, and removal -- for deviations.

An ISKCON devotee who is friends with PADA said he overheard an ISKCON devotee preaching to a guest at the Sunday feast recently, telling the guest "you need to accept only an uttama adhikary as your guru, and we accept that Srila Prabhupada is that uttama adhikary." Wow! That is what we said all along. The good news is that more emphasis on Srila Prabhupada is happening, albeit gradually. This means -- more and more people are gradually being instructed to take shelter of the pure devotee, which the verse above says is required for spiritual advancement. Acarya upasanam.

People like Brahmananda agreed with us that these GBC gurus were hoaxters, and he would tell me various stories of the foolish escapades of some of these alleged gurus that he personally eye-witnessed. Aindra also said these gurus are corporate figureheads and not bona fide mahatmas. Anyway, a person has to take shelter of a bona fide mahatma, that is what the above verse is instructing us. And that is what we are preaching, and its gradually taking hold in various sectors of ISKCON. ys pd]