[PADA: Jayadvaita Swami (JAS) says -- "I always cringe when I hear some of my God brothers disciples begin the chanting with Srila Prabhupada's mantra."

This section starts around 40 minutes in. Wasn't the policy of offering the GBC's guru's pranam mantras in ISKCON's kirtanas stopped -- at least in most of ISKCON? Aren't some of these gurus admitting they cannot absorb sins because they are not qualified? Has there not been a giant trail of burnt out and broken down "acharyas" in the wake of Jayadvaita's living guru program, which sort of looks like the aftermath of an oil tanker explosion?

Aren't some of these GBC gurus admitting -- our real shelter is Srila Prabhupada anyway? Aren't many of these GBC gurus getting sick and / or falling down because they are imitating the acharyas, which is forbidden? After Jayadvaita pushed folks like Jayapataka onto the Vyasasana seat, apparently claiming that JPS ilk can act as equals to Jesus -- and thus to be able to absorb the sins of thousands of people, didn't this nearly kill Jayapataka by taking sins he is not qualified to absorb?

Why is Jayadvaita swami still saying that the GBC's gurus, whom he admits are often falling down (ok since most of them have fallen) -- are still to be considered as parampara members who should have pranam mantras? Why is Jayadvaita swami mixing pranam mantras with people whom he admits, are prone to failure because they are still conditioned souls?

Why does Jayadvaita swami cringe when he hears the name of the pure devotee being sung, but he apparently feels ecstatic when he hears the names of the GBC's sexual predator guru lineage being sung? And why is ISKCON Desire tree and others promoting this alleged seminar? Some of our friends in Alachua say that Jayadvaita also cringes when the japa tape is on at the temple, he tells people to turn it down.

Doesn't Jayadvaita swami himself admit that his "gurus" are often falling into illicit sex, and as such, why is he mixing pranam mantras with this lot? Anyway, we could go on here forever, but there is something wrong with a person who cringes when he hears the name of his guru being sung, but he is happy to hear the names of the people who are voted into to an illicit sex guru program being sung, plain and simple.

The good news is -- this means, more and more people are SPONTANEOUSLY chanting Srila Prabhupada's name more and more, thus we are winning by default. An official ISKCON temple also just got rid of all of Jayadvaita's changed Gitas, we are making progress here! Yes, as soon as someone glorifies the pure devotees and not various illicit sex padas, JAS is cringing, this sounds like something Satan would be saying? Hee hee! ys pd 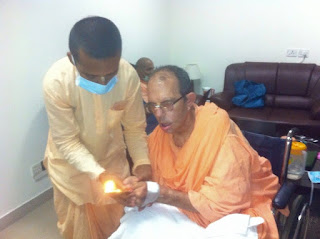