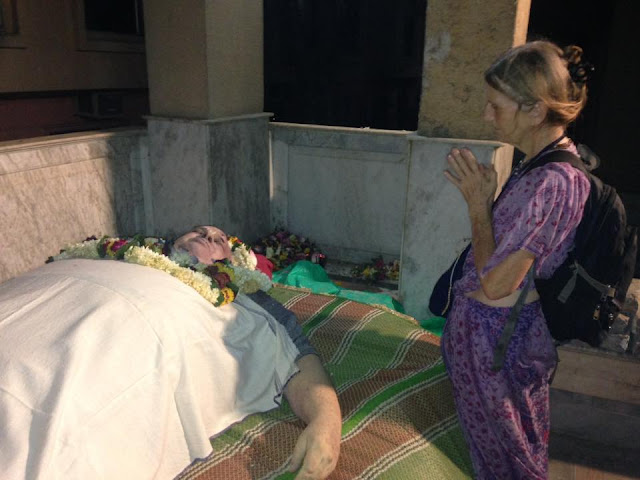 Gauridas Pandit das writes: Glories to one of Srila Prabhupada's favorite sons, Brahmananda Prabhu, who left his body today in Sri Vrindavan Dhama. Any living entity that gets the great good fortune of leaving their body in Vrindavan what to speak of such a pure devotee as Brahmananda Prabhu, goes back to Godhead.

All Glories to Srila Prabhupada and his dear most son Brahamanda Pr.
By Garga Muni Pr and Mahadevi dasi

Please accept my humble obeisances. All glories to our beloved Srila Prabhupada!

It is with great sadness that I have heard the news of our beloved Godbrother Brahmananda Prabhu. There was a sobbing message on my voicemail, from Kosha Rupa, and the rest of my day has been spent in bereavement.

Brahmananda was, is, a very great soul. He loved Srila Prabhupada dearly. He never wanted to usurp his position. He never felt he was an ideal disciple, but his love, his heartfelt love, for Srila Prabhupada was most selfless and unambitious. He never had personal ambitions to be this or that--he just wanted to serve Srila Prabhupada, to assist him in whatever way possible. And also to protect him from harm.

Amazingly, I had just yesterday stumbled upon an older BTG article that Brahmananda had written, praising the prayers of Queen Kunti. In the past couple of days, I have just begun reading his book, “Swamiji,” and relishing those memories of early New York 26 Second Avenue. It was such a special time.

My dear friend and Godsister, Kusha devi, had sent me Brahmananda’s book, “Swamiji” but I hadn’t had time to really look at it until yesterday. Then, when I opened it, I saw that Brahmananda had written me a note on the first page: In that big scrawling Brahmananda script it said, “For Govinda dasi, Where is YOUR book?” and signed, “Brahmananda dasa, 20/14/14” What a surprise! And then this news of his departure!

One Brahmin lady friend once told me that when a person dies, the soul remembers all the persons they knew, and loved, and sometimes they even bid them farewell. I would like to think that is true, for I loved Brahmananda most, of all my Godbrothers, and I still do. His mood of love for our Swamiji was very special, and I felt a similar mood. We shared a common feeling of love for Srila Prabhupada that I am unable to adequately describe.

I reflect on those sweet times in early New York, where we sat around Swamiji’s room every evening, relishing his talks about Krishna--and just about everything under the sun! I recall the times when Swamiji held up the world globe in his hands, and turning it slowly, would say, “Brahmananda, you will go to Russia, Goursundar, you will go to Japan, Rayarama, you will go to England...” Our Swamiji had big plans. And our dear Brahmananda was one of those beloved disciples who helped fulfill those plans.

Brahmananda and I shared a similar vision, that is: Swamiji’s room was the whole world, and he was all the people. He was our everything. There was never a thought of personal ambition, power, or position--none of that existed. It was simply not in the realm, that spiritual realm, that we knew as the early days of Swamiji’s Iskcon.

We will miss him. For me, Vrindaban will not be the same. Just going to visit the “brothers” was always a big “must” on every visit. Just to sit and reminisce about Srila Prabhupada, and hear those wonderful stories! I always felt Srila Prabhupada’s presence right there in the room!

Poor Gargamuni, he must be devastated.

But I also know that in some of my last visits with them, Brahmananda’s mood was one of anxiously waiting to go to be with Srila Prabhupada, and to serve him wherever he was. The separation was becoming more and more painful; Brahmananda missed him, and just wanted to be with him again!

I am very glad he was able to leave this world in the Holy Dhama. That’s what he wanted. May we all become so fortunate!

To do this, they will have to look to the service mood of such great souls as Brahmananda, for he served Srila Prabhupada with loving devotion, free from the poison of pratistha and pride. And in this way, that original beauty of Krishna Consciousness that filled Srila Prabhupada’s early Iskcon will again become prominent in the minds and hearts of devotees all over the world. That will be the glorious revival of Lord Chaitanya’s movement, the saving grace of Kali Yuga.