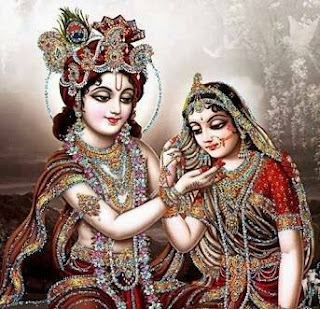 Where do the jeeva souls originate from?

Srila Prabhupada: Because we have got little independence. Just like a very rich man's son, sometimes gives up home life, his father and mother, he loiters in the street — that is his choice. Similarly, from sastra we can understand that originally we were in Krsna, with Krsna. But somehow or other we have come to enjoy this material world; therefore we have been entangled. Now get out of this entanglement and go back to Krsna. That is our proposition.

Guest: If we had been in the state of perfect Krsna consciousness, then surely we would have been able to have the awareness to know that material existence would have been no good for us. So why then would we have gone into…

Prabhupada: That is ignorance. That is ignorance. Because we are very small particle of Krsna, we are subjected to ignorance also. We are not fully in knowledge. Therefore just like a child out of ignorance does something wrong. Similarly, Krsna bhuliya jiva bhoga vancha kare (Prema-vivarta). We thought that by giving up Krsna's association, we shall be happy remaining independent, and then when we came here, we became entangled.

PADA: There you have it. (A) We were with Krishna, and then (B) we came into the material existence. "Originally we were in Krishna, with Krishna." And "We thought that by giving up Krishna's association, we shall be happy remaining independent." So all of these (deviated) people who said "we were never with Krishna," such as: Some of the Gaudiya Matha's folks / Uttama Sloka dasa and / or ex-Jagat Guru swami / ex-Panchadravida swami / ex-Bhakta Sudheer swami / Paramadvaiti swami / Navadvip's BR Sridhara Maharaja / BV Narayana Maharaja / Gaura Govinda Maharaja / Tripurari swami etc. have really not done their research on this matter.

Then again, no one would have even heard of the false jeeva tattva folks like BR Sridhara Maharaja / BV Narayana Maharaja etc. if the GBC had not draggged them into ISKCON and declared they are the seniormost "advisors" "shiksha gurus" "rasika club leaders" of ISKCON. Sorry, "we were all originally Krishna conscious living beings," that is our jeeva tattva. Most of these people have rejected the jeeva tattva of Srila Prabhupada, and similarly almost all of these people supported the Gaudiya Matha / GBC's conditioned soul's acharyas process as well. BR Sridhara Maharaja for example openly says we originated in the brahmajyoti, and Tripurari swami said he agrees with this version.

Srila Prabhupada was asked why some of his God brothers do not accept that we were once with Krishna and he said, they are tinged with mayavada. No surprise then, that a lot of these folks also supported the hokey Gaudiya Matha and / or GBC's guru process. All of this is being done to minimise the position of the real acharya, and artificially boost up and make themselves look like they know more than the acharya, its that simple, its about their own self-glorification.

Did we forget to mention, when all the banning, beating, molesting and assassinating was going on, most of these guys were enabling, if not sitting around having tea and crumpets with, the GBC's "acharyas" i.e. orchestrators of the oppressive regime? And many of these folks combinedly thought we were "being offensive" for objecting to the evil regime? Srila Prabhupada says sahajiyas are de facto mayavadas; and supporting false acharyas is sahajiya; and self-evidently -- these sahajiyas are also promoting mayavada jeeva tattva.

Bewildered by false ego, strength, pride, lust and anger, the demon becomes envious of the Supreme Personality of Godhead, who is situated in his own body and in the bodies of others, and blasphemes against the real religion.

This verse describes our original fall down. The rebellious living entity is envious of the Lord, and because he tries to become the Lord he simultaneously desires to extinguish his own self, which is an eternal part and parcel of God and which eternally reminds him of his subordinate position. In the Bhagavad-gita, however Lord Krsna explains that this is not possible. We cannot change the soul’s constitution under any circumstance. If we changed the soul’s constitution it would loose its eternity, or stability. He says:

This individual soul is unbreakable and insoluble, and can be neither burned nor dried. He is everlasting, all-pervading, unchangeable, immovable and eternally the same.

But although the individual minute soul is not able to merge with Krsna, who is ever-full in Himself, directly, Krsna makes it possible for him to merge with Him indirectly, namely He allows the living entity to merge with His inferior energy- matter. Despite the false propaganda of the Mayavadi philosophers, the living entity however never looses his original individuality completely. This can be explained in the following way. At death, the body is transformed into earth. The body while being alive already contains earth, so in that sense it is already earth, yet the body appears distinct from the mass of earth on account of the presence of the soul, who on account of his various individual desires creates varieties of bodily forms by his karma. The soul never mixes with the earth or any other material element. And if the soul does not even merge with anything in the material sense, why would it merge in the spiritual sense at the time of liberation as suggested by the Mayavadis? So when we say it merges, it is just like a green bird entering a green tree. After the bird enters the tree, we might not see separate existence of the bird, but that does not mean that the bird’s existence is finished. He exists separately from the tree although merged in the sense of the color.