A Message From the GBC 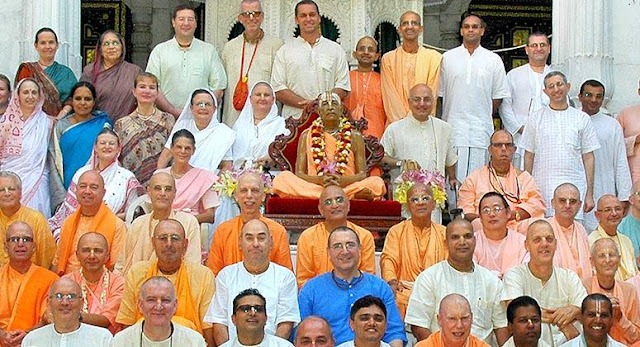 Dear Devotees,
Please accept our humble obeisances. All glories to Srila Prabhupada.
Many years ago, a relatively small group of devotees claimed that some of Srila Prabhupada’s devoted servants had poisoned their beloved guru and caused his disappearance from this world. These conspiracy theorists accused dedicated Vaisnavas of the greatest evil, and they did so with no credible evidence. No reliable science or witnesses supported their ghastly accusations, and so the Vaisnava community in general rejected their unjust claims.
Recently, an attempt has been made to resurrect this dark accusation, that loving disciples, those who gave their entire life to his service and strived continuously to bring comfort and good health to His Divine Grace, conspired to murder Krishna’s pure devotee. Once again, the accusation is made without reliable science or direct witnesses, or any other form of credible evidence.


The new accusations raise pseudo-scientific arguments that actual science rejects. Therefore, to protect innocent devotees from devastating offenses, the GBC is preparing a detailed response to the latest accusations, which are themselves the actual poison in this case.
The GBC requests ISKCON devotees to focus their attention on serving Srila Prabhupada’s mission and to avoid hearing these monstrous accusations, until the GBC presents a response to the latest poisonous theories.
Hare Krishna.
Your servants,

[PADA: Well good luck, but so far the GBC has not been very credible on just about any issue including: The (mis) treatment of brahmanas, women, children, cows; Changing the books; Closing and selling properties; Creating giant lawsuits, ad infinitum. The poison issue has a lot of detailed backing and raises many solid and verified points, including, why was the tape hidden and only given to me in 1997 by a devotee who feared for his life, for even having the tape in his possession? Yep, you GBC guys always try to make "a response" to so many of these issues, but you never seem to be very convincing, hence these issues keep coming back again and again. Srila Prabhupada says he is being poisoned, and this is not some dry theory, its a fact that he says that. ys pd]