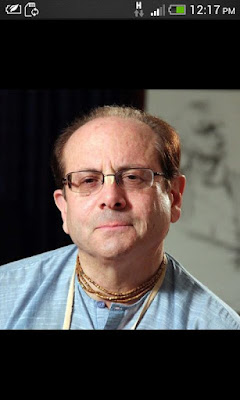 Ramesvara das (Robert Grant): Regardless of your personal opinions, when you publicly express such Vaisnava aparadhas you are all risking your spiritual lives. If you don’t know that you need to research what Srila Prabhupada has said about making such statements. Regardless of whatever you speculate on the mental platform, you cannot find any instruction from Srila Prabhupada that supports Kanistha or Madhyama devotees from writing such things. Sorry but I’m concerned about you and recommend a different forum to address legitimate concerns.

PADA: OK so we should NOT criticize the Radhanath regime because its aparadha / offensive, but isn't this how people got killed -- for criticizing the Radhanath regime in the past? Sulochana said that demonizing us dissenters "paints a bulls eye on our backs -- so that we will maybe be assassinated." Did we forget to mention -- some of Ramesvara's Los Angeles "enforcers" later on told me, they were involved in helping set up Sulochana's murder? OK Ramesvara was working with the New Vrndavana people, according to these folks at least.

You mean to say -- you GBC's guru folks -- like Ramesvara, are STILL painting bull's eyes on people's backs (to get them killed?) by branding them as offenders (and thus: demons)? Radhanath's regime has all along been supporting enforcers of "the enforced cult ritualistic worship of sexual predators and / or pedophiles as acharyas." And now they even buried one of their biggest known pedophile acharyas in the holy dham.

We should not protest these deviations?

First of all, their GBC's guru program had the "Prabhupada fanatics" shunned, vilified, banned, beaten and killed, and now the Radhanath program is allegedly spending $20,000,000 suing Prabhupada folks in the Delhi Supreme Court to oppress them. Is this all because some "Prabhupada people" will not bow down to Radhanath's "buried pedophiles in Vrndavana samadhi's project"?

And one important current resident of Vrndavana has just now wrote to tell me that the GBC's gurus cadre are the worst offenders to the holy dham -- in the entire history of the holy dham -- for burying a known sexual predator and criminal deviant there. They said, its like burying dog manure in the holy dham, and then having people worship that dog manure as if it was pure. Agreed! And they said, the day will eventually come when us Vrndavana local folks will rise up and dig up these bogus samadhis and toss the contents into the sewer. Wow!

Anyway, Ramesvara / Robert Grant has been a co-enforcer of the same project, its that simple. So there are people who worship pure devotees and then there are people who place criminal pedophiles in samadhis because they want the world to worship criminal sexual predators as Vrndavana's -- and as the entire world's --- messiahs. And these Ramesvara / Radhanath guys have been the co-creators / goonda enforcers of this project, its that simple.

Same basic problem we have had with guys like the Sanat / Mukunda / Prahlad (Paul Coats?) / HKC Jaipur folks. In 1997 hundreds of children were liberated from the GBC's "guru schools," where abuse was apparently still going on. Prominent members of the above team then said that those who liberated these children need to be reported to the GBC's goondas -- so they can have dissenters to this child abuse project -- killed.

Clear whose side they are on! The GBC's goondas wanted to kill anyone who halted child abuse, and so do these guys, same identical program, same agenda, same methods etc. This is the result of the GBC promoting this process, it spreads.

Which is why some ex-kulis told me, these people's bodies may have left the ISKCON guru program, but their minds clearly have not. Just like a "senior devotee" also began to harass a friend of mine who was getting death threats from the Ramesvara program in the 1980s, some people still think it was not bona fide to oppose this process? Yep! His mind has not left the regime ...

And why is anyone still working hand in glove working with the GBC's gurus or their goondas anyway? Of course, we were merciful to the Dayalu Nitai / HKC Jaipur's folks, we could have reported that death threats were coming to us from people living at their address -- to the police, and created an international criminal investigation incident. Yep, anyone who addresses child abuse has to be banned, exiled, or ... killed? Same idea as the GBC / Radhanath program? That is how these thinkers co-created all these mass molesting programs in the first place.

Some ex-gurukulis told me that they were in "auschwitz for kids." We should not liberate hundreds of kids from that condition? Recently one of Prahlad's friends tells me he has finally rejected these folks, and he no longer follows the Hitler-anuga process. My ex-kuli friends laughed and said, really? Yes, now there is no need for some of these folks to worship Hitler anymore, because these people want to see children suffering in concentration camps, so they self-evidently take great delight in seeing children suffer terribly from abuse. Thus, they have become another Hitler-type person themselves. One of the former victims said, these folks are even worse than Hitler because they target children for their death camps, at least Hitler targetted any age of person.

Yep! They no longer need to worship Hitler anymore, they have become what they worshiped already: They are another Hitler themselves! These ex-kulis are right! Sulochana said all of these people have been -- tossing children into a wood chipper. And Radhanath was one of the henchman / leaders when all this "auschwitz for kids" program was going on? And did we forget to mention ISKCON had to declare itself bankrupt due to the problems their child abuse process eventually created?

In sum, there has been this idea that bogus systems of worship, bogus samadhis, bogus acharyas, and abuse of victims of the above process etc. should be allowed, and those who oppose should be contained. And Radhanath has been a part of this process since he was a famous defender of the New Vrndavana criminal program, and he helped bury the New Vrndavana criminal abuser leader in a samadhi. And now Ramesvara comes forward to help defend that same regime, and one of its biggest henchmen ... again!

Its also amazing that some of the ex-children victims of this regime compare the odious regime to Hitler's regime -- and German death camps etc., and that ANYONE would still defend this regime, whether Ramesvara or his neo-Hitler ilk, its amazing!

Ramesvara seems to think eventually we will all unite under the banner of Srila Prabhupada and Lord Gauranga. OK but this is the whole problem, people are flocking to Srila Prabhupada, but as soon as they do, they are being shunned, banned, vilified, exiled, sued, harassed, attacked, beaten and sometimes assassinated by the GBC's goonda patrol. When I was on Watseka L.A. I got surrounded by four or five GBC's goonda guys doing the "coyote walk" around me, and the LAPD police came by and told me, you better get out of here, these people want to kill you.

So as soon as anyone wants to worship Srila Prabhupada and not Radhanath's illicit sex with men, women and children acharya's process, they get sued and the GBC spends $20,000,000 in the Supreme Court to defend their illicit sex acharya's sampradaya. Then, they sue the India printer so we cannot get out our books. Then Ramesvara says, we all need to unite, but where ... in court? Where they will sue us for not worshiping debauchees as our society's acharyas? Meanwhile most devotees can barely pay their rent, while the GBC is apparently spending millions buying new Mercedes for their lawyers, so their lawyers can go out to buy a chicken tikka? Anyway, for Ramesvara to still want us to respect the main henchmen / enforcers of the GBC's guru regime shows, he has not really reformed? Or what! You tell me?

DD: Once I went to Radhanath's page just out of curiosity and guess what, after several posts there I didn't find even one word ''Krsna'', just ''his own philosophy'' thats all. So they are running KC movement without Krsna, isn't this ridiculous? And of course he is distributing his own book instead Bhagavad Gita As It Is.

Bhakti Vikas Swami: “There’s a book […] written by one of the, probably the most popular leaders within ISKCON today –now that book, I can’t help thinking if you’d shown it to Srila Prabhupada he would not have been at all pleased, because there are pictures of all these mayavadis swamis and mundane people,[….] and there is not a bad word about them.