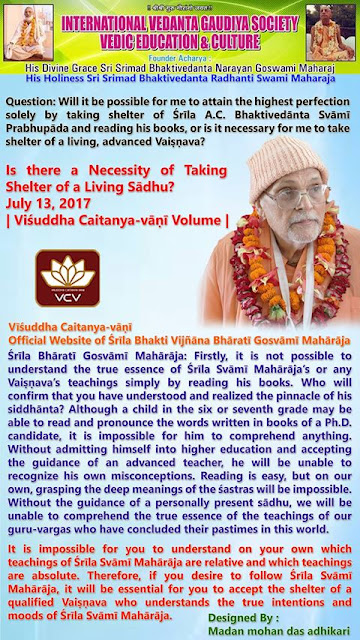 [PADA: We told ya, the Narayan Maharaja program is preaching that we need to surrender to the followers of the Gaudiya Matha's gurus, the same program that criticized Srila Prabhupada and called him "a paccha grhastha." Rocana's living guru idea is basically a parroting of these folks.

This is essentially siphoning most of the manpower of ISKCON off to competing institutions and various acharyas, sadhus, babajis etc. ... its breaking ISKCON up into fragmented schisms of competing gurus, authorities, acharyas, etc. ... among other problems. Yep, everyone has to leave ISKCON "to find the living guru"! And so -- they leave -- in droves. This is dismantling ISKCON, which is what some say, is the goal of these folks ...]

Rocana Dasa (Sampradya Sun) We accept the parity of siksa and diksa-guru, and the sastric imperative that initiation is a connection to the eternal sampradaya brought about by transmission of knowledge through the Brahma-Madhva-Gaudiya Vaisnava via medium who is following the predecessor Acaryas in the Sampradaya, and particularly the most recent, preeminent Acarya − His Divine Grace A.C. Bhaktivedanta Swami Prabhupada.

[PADA: Notice! Rocana's word "parity," which means -- "the state or condition of being equal." OK swell, there is equal "parity" between the church choir members (layman -- shiksha gurus) and Jesus (diksha guru). Really?

Both levels are on an equal level of parity?

That is not at all what Srila Prabhupada says. This is also not even common sense, that the neophytes or shiksha gurus are "on par" and equal to the acharyas / messiahs? Of course, a pure devotee can sometimes be described as both shiksha and diksha, but to telescope the diksha title to neophytes is bogus. This is also the same problem we have with people like Svavasa and other leaders in Los Angeles, they think Srila Prabhupada is the minor league shiksha guru temple pot washer, while the biggest henchmen leaders of the criminal New Vrndavana program are the sin-absorbing Jesus-like diksha guru messiahs.
Anyway! Srila Prabhupada says we neophytes can only act as SHIKSHA gurus but not as DIKSHA gurus, in part because -- when we neophytes act as diksha gurus we become OVERWHELMED by absorbing the sins of others, because we neophytes are NOT equal to the pure devotees. In sum, we do not accept the alleged "equal parity" of shiksha and diksha gurus, especially when Rocana's so-called neophyte diksha gurus are getting sick, falling down if not dying prematurely LEFT, RIGHT and CENTER (from absorbing sins?). All the time!

Worse, as we discussed with others recently, Rocana is actually killing some of his God brothers by encouraging them to try to artificially take the post of a "sin absorbing" acharya, and so his own brothers are -- falling down, getting sick and dying. Good job Rocana, you are killing your own brothers de facto!

And this is also how Rocana's ilk have degraded the post of the pure devotee by saying his falling down neophyte gurus are on an equal plane of "parity" with pure devotees and thus they can be diksha gurus. They cannot! And then they have to say, gurus fall down, not a problem -- we will start a broken down guru's fix it and repair shop!

And Rocana will be the head mechanic in the messiah's fix it up shop? Rocana is the person who advises and oversees the acharyas? And he is spawning many others to do the same, for example Hanuman das Croatia, he has become another co-mechanic of Rocana in the acharya's repair center. Hanuman actually says he would rather promote the GBC's faulty acharyas than work with us Prabhupadanugas, apparently because, he thinks his advice will fix them! He is going to fix broke down acharyas? What is a broke down acharya?

Moreover there is no functioning religion on earth which says that their rank and file neophytes can be viewed "on equal parity" with their spiritual master? Nor can we even find a mundane business where the truck loader is "on an equal par" with the manager of the trucking company? Nor could such a company function practically, where the menial rank and file workers thought they could have the same "equal parity" big status, big salary, big car, big office and voice in the operations of the company, as the managers in the head office. There is no parity of the workers and the corporation's leaders, in any practical operation. Perhaps this is why ISKCON's current leaders cannot seem to fix anything of substance?

The chain of command would cease to exist. In other words, you'd have the same renegade acharya's problem as ISKCON has. A business where everyone thinks they are the boss, cannot function. Or! Suppose there is equal parity between the hospital janitor and the hospital brain surgeon? Nope, the janitor's surgery would be bogus, and would kill people! So this is the whole trouble with these Gaudiya Matha / GBC / Sahajiya vada folks, they think that the neophytes can take the post of acharya / messiah / Jesus of Nazareth and absorb sins of followers, because the laymen and the messiahs are parity equals.

The transmission of actual pure divyam jnanam will come via media Srila Prabhupda's books, although a layman can convey some limited parts of the truth, and that is why the layman is called a shiksha guru, vartma pradarshaka guru, monitor guru and so on. The neophyte has a limited capacity to deliver others, and this hierarchy has to be kept in proper order or the system of basic managing breaks down, where anyone and everyone can claim to be an equal to the messiah.

And this is why Rocana's "manifold and many" acharyas program cannot contain basic child care problems, never mind many other problems, because there is no system of regulated order when almost everyone is claiming to be the "guru successor to God," and they thus have no respect for the opinion of others. Or as Srila Prabhupada calls them "self made authority." ]

[PADA: Except, Rocana has also said that the ISKCON gurus need to be under tighter controls and regulations to contain them when they stray off the reservation and deviate. Worse! If the organization is not going to regulate, monitor and contain the behavior of their wayward leaders, who will?

The Unicorn Princess, Santa Claus or the Tooth Fairy?

Rocana was a leader of the 1986 "guru reform" aka guru fix it program. What is a "guru reform"? Can his gurus be fixed, and what does it mean when the guru needs to be fixed, at all? And Rocana is the head surgeon in the guru repair hospital? Where does Srila Prabhupada say the GBC will run a guru reform and repair shop?

So, on the one hand Rocana says the GBC will act as surgery doctors in a messiah's fix it and repair shop, and they will contain the deviations of their voted in messiahs, while on the other hand, the GBC should not be allowed to legislate or control who takes the post of parampara acharyas and who does not?

Any God brother who thinks he has the qualifications to absorb sins like Jesus should simply step into the guru role, which is what the Gaudiya Matha did? Another man comes, then another and another, to be guru. Sometimes the acharya is being changed three times a year. Well yes, everyone who feels like they are acharya should step up and take on the post, which is also what happens in Bellvue mental home, various people step up and think that they are the next Jesus etc.

Worse! Rocana is now calling for (A) tighter legislation and regulations for his messiahs, at the same time, (B) opening the flood gates for anyone who wants to declare themselves to be gurus, saying they cannot be constrained by the GBC's "withholding permission." How can we both increase GBC's guru legislative controls, and release all controls and let anyone declare they are the next acharya?

So the guru flood should not be constrained, we do not need the GBC to grant permission for anyone who wants to be guru, because everyone and their brother can now claim to be a guru without any structural input from the institution? Everyone in the Bellvue mental home who thinks he is Jesus, should no longer be constrained? We should agree the mental home patients are another Jesus? The patients shall take over the mental home? So first of all Rocana had a guru by appointment scheme, then his GURU REFORM voting system, and now, anyone can self-declare they are gurus. That is what happened in the Gaudiya Matha! 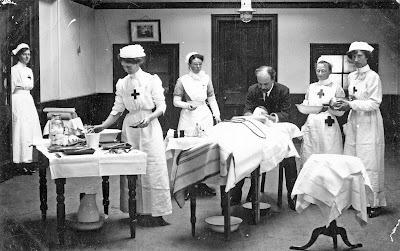 Anyway! This is all good news, now Rocana and his pals like Torben, Ajit, Kim etc. are saying everyone of Srila Prabhupada's disciples can step up to be guru, take sins, --- ummm, so they can get sick, fall down, and die. How many volunteers do they think they are going to get? Hah hah! And what happens when all the Prabhupada devotees are gone, which is happening sooner than later? What rabbit will they pull out of their hat then? ys pd

Right! So this was the first problem in 1978, the GBC announced that bhogha would be offered to conditioned souls, therefore, no one in ISKCON would be eating any prasadam anymore, it became the International Society of Bhogha consciousness. And that is why there were so many crimes, scandals, fall downs and so on, a bhogha eating society will have badly contaminated consciousness. So we basically quit eating temple food considering it contaminated, and that saved us from this deviation. Meanwhile, Gaura Govinda Maharaja went along with the GBC and their program of offering bhogha, offering disciples and so on, to these conditioned souls. He supported the bhogha eating society. That means GGM has no idea what is the basic ABC point of all religion, i.e. all religions -- even the Christians, they offer their food, they offer their disciples, they offer the temple donations etc to their guru, not offering these things to conditioned souls if not sexual predators and deviants. GGM has never understood even the most basic ABC point any new bhakta was taught by Srila Prabhupada, all the bhogha, all the disciples, the money collected, the buildings, everything -- has to be offered to Krishna via the pure devotee. He went along with the deviants and he said I was bogus for promoting the idea that bhogha and disciples has to be offered to the pure devotee, that means, he opposes the principles taught by the acharyas. So if GGM has no idea what is the ABC point of religion, why should anyone promote his teachings which are opposed to the principles of religion? ys pd