Recently, in ISKCON's official newspaper, we found that:

"The entire TOVP Team is grateful to His Holiness Lokanath Maharaja and all his disciples and followers for their inspiring example and service attitude towards this most important ISKCON project " Personally, I have absolutely nothing against the TOVP by itself. The issue is that the authorities, as it is said in the above lines, consider generally things like the TOVP as ISKCON most important projects.


The fact is that, however sumptuous the TOVP will be, it will stay only a building and is not supposed to go to Krsna and the spiritual world one day. It will certainly inspire people to a certain point, but that will stay limited. The TOVP, in one form or other, will stay forever on this little planet and those who consider it as the most important project of ISKCON and propagate this idea will also naturally stay with it in this material world.


We are very far from Bhaktisiddhanta Maharaja saying that he was ready to sell the marble of temples for other higher spiritual purposes. And far from Srila Prabhupada's first goal for ISKCON which was that people, more than anything else, should become pure devotees. That would inspire other people much more than the TOVP, with its wrong-right, vague-precise, certain-uncertain, humble-dogmatic explanations about the universe which will be given in the future by the devotees to those persons!


We are not the first ones in history to build big masterpieces. The advantage of, at the same time, really trying to reach spiritual perfection is that it is also a real bodyguard against doing crazy things. Do you think that if Jayadvaita Swami would really try to get this result, he would have time to do what he is doing with Prabhupada's books? If we consider the fact that "improving" Prabhupada's books is a collective accepted idea in ISKCON, we have already the proof that globally, things like the TOVP project are not efficient the same against that kind of nonsense.


The problem is precisely that many of the very big leaders since very long have given up this goal for themselves and don't even try anymore to reach this perfection. They mainly live on their past spiritual gains. To be big shots, to receive honour, adoration, service, respect, consideration and admiration from others and to do things is enough for their happiness. They are spiritually small-timers. All that is not the real goal of life.


So, external projects became the most important for ISKCON and those huge projects, once accomplished, contribute of course to increase those authorities' own mixed spiritual-material status in society. Those external projects and accomplishments take the place of actual spiritual progress and advancement till the ultimate and necessary goal of life. In fact, Srila Prabhupada's first purpose for those people (and each of us) was that they became real pure devotees. Unfortunately, those big guns look not at all interested in that, or even have any idea about what it really means. They prove it everyday. Or think that they have already reached this level. Which means the same.

So, with such very big irremovable authorities who are supposed to give the right true example to others but don't do it, if a "little" devotee is actually interested in really trying to reach the proper goal of life, it becomes generally necessary for him (her) to go outside of ISKCON in order to escape to this superficial external pressure. That is the drama.

[PADA: Correct. Mayapura has become the citadel of some of the worst nonsense going on in ISKCON, starting with establishing the worship of sexual predators as God's successor acharyas. Of course New Vrndavana is sometimes said to be the main Mayapura competition, only because people argue with me if their nonsense was worse.

Then there was the Jayapataka regime's child abuse problem, severe mistreatment of dissenters, and so on. Never mind that, Jayapataka is like a walking bill board for why Srila Prabhupada told us, we neophytes cannot absorb sins and if we try, we will get sick, fall down or both. Jayapataka is clearly a prime example of what happens when one takes sins without authority. Kirtanananda is yet another example, and so on and so forth.

Did we forget to mention that Jayapataka regime is spending millions suing the Prabhupadanugas in India? The only good news is that his court case is not going forward very well, but in any case its a waste of money when he should be using that money to make cow protection, varnasrama and other programs.

Lokanath Swami is himself another person who thinks he is another Vyasadeva:
Vyasa Puja 2017 HH Lokanath Swami Maharaja’s Vyasa Puja was celebrated on the auspicious day of Asadi Ekadasi, Tuesday 4 July 2017 in Pandharpur Dham.

This is the same diseased mentality that has produced all these bogus acharyas. Its an insult to the parampara to say that these neophytes can take sins like Jesus and be diksha gurus. They cannot absorb these sins, its taking them, according to Sri Isopanisad, to the darkest regions of the universe. Anyway, yes, we have a number of ex-gurukuli friends and they are shocked that Mayapura still hosts deviants like Jayapataka, Bhavananda, Hari Sauri and others, after these people were the orchestrators of the mass abuse program there.

And now we are told JPS is making plans for his big samadhi there, so we will have to worship this sinful man for decades? Well hee hee, this is why Srila Prabhupada says, you can be worshiped here by some artificial tricks but meanwhile Krishna sends you packing to the lowest regions for being a bogus acharya. 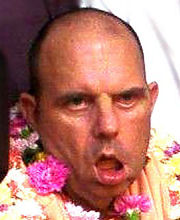 Whats worse is, none of these people even sees the writing on the wall, that they are not qualified to absorb sins, and its taking them down -- to do so? 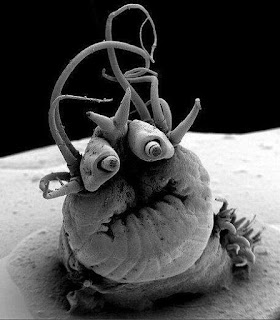 These false gurus fall down to a lower body, its that simple. If Lokanath swami had any loyalty to Srila Prabhupada, he would be pointing this out and trying to save ISKCON from worship of these conditioned neophytes as acharyas. Anyway, this article is correct, most people are going to leave, they have no interest in worship of false acharyas, whether in a big building or anywhere else.

Oddly Lokanath swami knows that, he wrote around 1988 that ISKCON is turning into a ghost town, everyone is leaving. He knows his bogus acharyas are turning millions of people away from Krishna, and he just does not care, he is only worried about getting his own bogus Vyasa pooja at this point. ys pd]