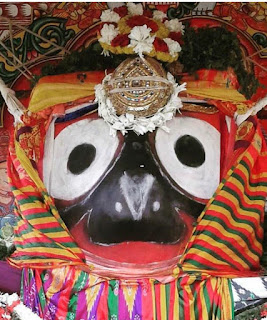 Sri Caitanya-caritamrta Lectures : Adi-lila: Lectures : Adi 7: Lectures : Sri Caitanya-caritamrta, Adi-lila 7.3 -- Mayapur, March 3, 1974 : 740303CC.MAY : [I offer my obeisances to Sri Krsna Caitanya, Prabhu Nityananda, Sri Advaita, Gadadhara, Srivasa and all others in the line of d : You cannot understand Kṛṣṇa without the mercy of these Pañca-tattva. Therefore Kṛṣṇa, although He came personally, He taught the teachings of Bhagavad-gītā and asked people, sarva-dharmān parityajya mām ekaṁ śaraṇaṁ vraja [Bg. 18.66]. But because we are mūḍhas,we misunderstood Kṛṣṇa. We could not take the last instruction of Kṛṣṇa. Therefore Kṛṣṇa again came as Śrī Caitanya Mahāprabhu to teach us how to approach Kṛṣṇa. If we read the life of Caitanya Mahāprabhu, His acceptance of sannyāsa order, His preaching all over India, His chanting and dancing, His living at Jagannath Purī, His activities, His meeting with the devotees, His Guṇḍicā-mārjana,His Ratha-yātrā kīrtana—if we study all these activities of Śrī Caitanya Mahāprabhu, immediately you understand Kṛṣṇa..

After collecting these books, Śrī Caitanya Mahāprabhu returned to Jagannātha Purī. At that time, the bathing ceremony of Jagannāthawas taking place, and He saw it. Sri Caitanya-caritamrta - 1975 Edition : Cc. Madhya-lila : Madhya 1: The Later Pastimes of Lord Sri Caitanya Mahaprabhu : Madhya 1.121

When Jagannātha was absent from the temple, Caitanya Mahāprabhu, who could not see Him, felt separation and left JagannāthaPurī to go to a place known as Ālālanātha.

Ālālanātha is also known as Brahmagiri. This place is about fourteen miles from Jagannātha Purī and is also on the beach. There is a temple of Jagannātha there. At the present moment a police station and post office are situated there because so many people come to see the temple.

The word anavasara is used when Śrī Jagannāthajī cannot be seen in the temple. After the bathing ceremony (snāna-yātrā), LordJagannātha apparently becomes sick. He is therefore removed to His private apartment, where no one can see Him. Actually, during this period renovations are made on the body of the Jagannātha Deity. This is called nava-yauvana. During the Ratha-yātrā ceremony, LordJagannātha once again comes before the public. Thus for fifteen days after the bathing ceremony, Lord Jagannātha is not visible to any visitors. Sri Caitanya-caritamrta - 1975 Edition : Cc. Madhya-lila : Madhya 1: The Later Pastimes of Lord Sri Caitanya Mahaprabhu : Madhya 1.122

Sārvabhauma Bhaṭṭācārya first introduced Janārdana, saying, "Here is Janārdana, servant of Lord Jagannātha. He renders service to the Lord when it is time to renovate His transcendental body."

During Anavasara, after the Snāna-yātrā ceremony, Lord Jagannātha is absent from the temple for fifteen days so He can be renovated. This occurs annually. Janārdana, who is here being introduced to Śrī Caitanya Mahāprabhu, was rendering this service at the time. The renovation of Lord Jagannātha is also known as Nava-yauvana, which indicates that the Jagannātha Deity is being fully restored to youth. .Sri Caitanya-caritamrta - 1975 Edition : Cc. Madhya-lila : Madhya 10: The Lord's Return to Jagannatha Puri : Madhya 10.41 :

After the bathing ceremony of Śrī Jagannātha, which takes place just a fortnight before the Ratha-yātrā ceremony, the body of the Lord Jagannātha Deity is repainted, and this takes just about a fortnight to complete. This period is called Anavasara. There are many who visit the temple to see Lord Jagannātha regularly every day, and for them His retirement after the bathing ceremony is unbearable. Śrī Caitanya Mahāprabhu felt Lord Jagannātha's absence from the temple very much. Sri Caitanya-caritamrta - 1975 Edition : Cc. Madhya-lila : Madhya 11: The Beda-kirtana Pastimes of Sri Caitanya Mahaprabhu : Madhya 11.62

The very strongly built dayitās [carriers of the Jagannātha Deity] were as powerful as drunken elephants. They manually carried Lord Jagannātha from the throne to the car.

The word dayitā refers to one who has received the mercy of the Lord. Lord Jagannātha has a number of stalwart servants known as dayitās.These servants do not come from very high-caste families (brāhmaṇas, kṣatriyas or vaiśyas), but because they are engaged in the service of the Lord, they have been elevated to a respected position.

Thus they are known as dayitās. These servants of Lord Jagannātha take care of the Lord from the day of the Snāna-yātrā up to the time the Lord is carried from the throne to the Ratha car. In the Kṣetra-māhātmya these dayitās are said to come from the śabaras, a caste that keeps and sells pigs. However, among the dayitās there are also many who come from the brāhmaṇa caste. Those dayitās coming from the brāhmaṇa families are called dayitā-patis, or leaders of thedayitās.

The dayitā-patis offer food such as sweetmeats to Lord Jagannātha during the anavasara, the resting period after Snāna-yātrā. They also make the early morning offering of sweetmeats daily, It is said that during the anavasara Lord Jagannātha suffers from fever and that thedayitā-patis offer Him an infusion of drugs represented by fruit juice. It is said that in the beginning Lord Jagannātha was worshiped by theśabaras and was known as the Deity Nīla Mādhava. Later, when the Deity was established in the temple, the Lord became known asJagannātha. Because the Deities were taken from the śabaras, all the śabara devotees were elevated to the position of dayitā.
Sri Caitanya-caritamrta - 1975 Edition : Cc. Madhya-lila : Madhya 13: The Ecstatic Dancing of the Lord at Ratha-yatra : Madhya 13.8
Posted by krishna1008 at 5:59 AM