Question from Poland about Trivrikrama Swami 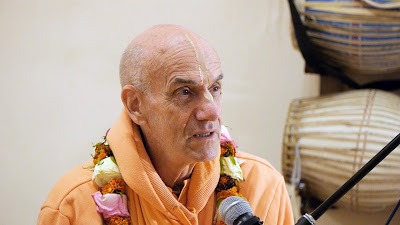 [PADA: Thanks very much for your question prabhu, "what is your opinion of Trivrikrama swami, the GBC guru of Poland, Belarus and Ukraine"?]

Trivrikrama Swami: You have a complaint? You better be ready to make a solution! Prabhupada didn’t appreciate criticism unless we had a positive correction. Otherwise it’s better to shut up.


[PADA: Our main complaint about Trivrikrama swami starts with the fact that he is part of the GBC's illicit sex acharya's club, and he was part of their 1986 "50 man guru reform committee." Except, the maharaja forgot something important about Krishna's guru successors, they do not need to be "reformed" and thus corrected, censured, monitored, suspended, removed, excommunicated, reported to the police for criminal actions -- and so forth, as if the guru is equal to an East Los Angeles drug dealer.

Trivrikrama's program always juxtaposes debauchees and criminals, i.e. those who need "reform," with God's successors, because he simply cannot distinguish one from the other. Srila Prabhupada says a person who cannot distinguish good from evil is in the modes of ignorance, he has no discrimination.

Trvrikrama swami self-evidently thinks God's successors, gurus and acharyas are often the falling down subordinates of his concocted "guru reform committee," and he thus has to correct, fix, repair and remove the acharyas from Vaikuntha when they get to be too rotten of criminals and debauchees.

What kind of religion teaches its flock that God's guru parampara is full of debauchees, deviants, sexual predators, drug addicts, criminals, ponography addicts and people who have even fallen into eating chicken salad and other types of meat?

This is all a total concoction created by Trivrikrama's program, because Srila Prabhupada says the acharyas are always fully Krishna conscious. Their SAC "Shastra Advisory Committee" (Basu Ghosh etc.) has made all these bogus rules for gurus, that the guru needs reform, censure, suspending etc. Ooops, its one of the ten offenses to consider guru is ordinary and in need of reform?

Another related problem is that Trivrikrama swami does not seem to be able to figure out "how rotten" his acharyas from heaven messiahs need to get -- before he attempts fixing them?

Watching pornography? No problem! Not too rotten.

Offering LSD to the shalagram deity? No problem! Ooops, we need to keep this guy in the guru seat -- so as not to disturb the sisyas.

Having perverted sex with minors, orchestrating murders? Oh, that guy should be worshiped in a samadhi in Vrndavana! He is not rotten at all, he is our saint!

What actual level of deviation is not acceptable for Trivrikrama's messiahs? Apparently, its almost impossible to find the maharaja's program's low bar standard that does not warrant approval as one of their gurus. And worse, they say that their program -- of acharyas who are falling down left, right and center into debauchee behavior is "the tradition of the Vaishnavas."

And worse, Trvrikrama thinks people who are engaged in illicit sex, debauchee behavior, taking drugs etc. can be diksha gurus and "absorb sins like Jesus." Really? That means we are in very good company, Trivrikrama is attacking both Jesus and us, equally. He thinks debauchees can perform the same functions as Jesus, that is an attack on Jesus.

I feel very blessed to be on the same page as Jesus, we are both being victimized by the same Trivrikrama party!

Yes, their poor gurus are getting sick and falling down from "taking too much karma" -- because they can take karma like Jesus -- oh boo freaking hoo, gimme a kleenex already. But! Its fools like Trivrikrama who think mundane fools can take the same post as another Jesus and absorb sins who caused all these problems artificially, and so now we have to "pray to Krishna for the guru when he gets sick or fails." We have to pray to Krishna to fix Trivrikrama's foolish program of rubber stamping his illicit sex pals as their Jesus-like messiahs? Why would Krishna fix that anyway, is He also foolish like they are?

Rather Krishna Himself says He will send these fools packing to the lowest regions of the universe for promoting unqualified persons as gurus! And! Wouldn't that make a lot of people at our local pub, strip club or gambling parlour also fit to be acharyas -- since the bar of behavior standards is so low, its almost not existing? Where do they actually draw the line and say, ok this guy is not fit to be our acharya?

Trivrikrama swami says do not complain unless you can do better. Great idea, and we are doing that, indeed my 90 year old grand ma neighbor with all her cats is already doing way better than he is, she worships a pure devotee like Jesus and she would never join Trivrikrama's illicit sex pooja program, because she has more elevated consciousness than he has.

Anyway! Maybe one of these days these guys will actually start to listen to Prabhupada: 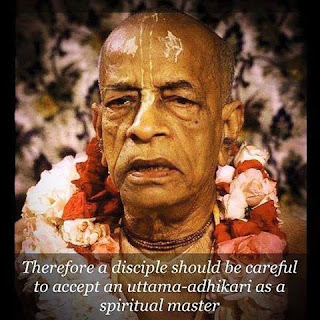 [PADA: To sum then, lets quote some devotees from South America who recently said to PADA -- after they found out that Trivrikama swami's program was giving them a pornography acharya -- "These guys (like Trivrikrama) are the biggest pack of liars, cheats and degraded people on the planet. They cheated us into worshiping a person whom they all knew all along was watching pornography as our guru over here. We are going to take PADA's advice and only worship Srila Prabhupada."

Yep, people all over the planet are catching on. Trivrikrama saw me at a festival once and he said, "And you are not dead yet, you should be dead." Yep, anyone who does not worship his illicit sex acharyas program, and they want to worship Srila Prabhupada instead, needs to die. And that is what these South America devotees finally figured out, these Trivrikrama folks are sub-violent goondas who enforce their worship of illicit sex with lies, cheating, and when that does not work, they could use violence, and they have used violence to defend their illicit sex pooja project.

The good news is these devotees in South America are never going back to this program and they are now going to worship Prabhupada. So that about sums it up, hope this helped! If you have further questions write me: