Question to PADA about Radhanath swami

I first met the devotees in the early nineties. Living in ******* for a few years now. Consider myself an ISKCON devotee, but some time ago start doubting few things, and a few leading persons. When Harikesha started to fall, I was in the ****** Temple and this was my beginning of being less sentimental (Probably after his fall some of the other leaders also stopped using the term His Divine Grace for more acceptable His Holiness.)

I was fascinated by Radhanath Swami for some time in the past, but recently developed some serious doubts about his position. (I do research in esoteric, paranormal and MK). He meets with world leaders and they are the same demoniac people as they've always been haha.

Who will be satisfied to shake hands with the pope (I use small letters for a purpose), knowing that Francis is well connected with nazi circles in Argentine and other corruption etc? But then satisfied maybe not the best word? Later I was amazed to find, that even some ISKCON sanyasis find His behaviour bizarre, erratic, strange ... and not bona fide.

Will ISKCON do something to reduce this showman? He is influential for sure, but I am less sentimental nowadays. In my ******* country these topics are still kinda TABOO haha. Would like to hear from you, Prabhus. Yours Site is controversial, but some truth is there.

[PADA: First of all Harikesh was doing all sorts of eccentric things for many years, and nothing of substance was ever done to correct him. He was for example citing all sorts of speculative materials in his lectures, which means he was reading all sorts of other materials other than Prabhupada's. The GBC went into a comatose state when these things were reported. Bhakti tirtha swami was even worse, he was reading speculative materials and citing them in his lectures too. Same response from the wunderbar GBC, "What is the problem if the Lost Continent of Mu sank into the Atlantic ocean"?
Harikesh had to sort of slink off and resign on his own, allegedly taking a large amount of cash as he left. I was in Los Angeles after Harikesh announced that gurus may use condoms while engaging in illicit sex, ... and the Los Angeles managers there refused to take his photo off the altar and stop his pooja. I started saying the Los Angeles temple is worshiping "condom pada," and no one there could really counter that argument. Of course worshiping condom's pada is more advanced than some of the other nonsense these guys have been promoting.

Apparently people engaged in illicit sex with their therapists are fit to be worshiped as messiahs.

So yes, its very strange that it takes almost forever before these GBC leaders finally admit there really is a problem, and they cannot any longer support a deviant like Harikesha as their guru. From what I understand, your country and the French zone were wiped out economically by all these bogus guru issues. Harikesh meanwhile seems to have lost faith in Krishna. This of course is why some believe that these GBC are intentionally tanking ISKCON into ruination and devastation, because they are non-devotees who are trying to drag the whole thing down.

The only good news is that Harikesh saw the writing on the wall, the GBC's guru program is failing, and he saw that light years before most of his compatriots -- who are still hanging on thinking they are the messiahs of the jagat who can absorb sins like Jesus. So he bailed out while the getting was good, also to reduce his input of karma from taking more disciples? 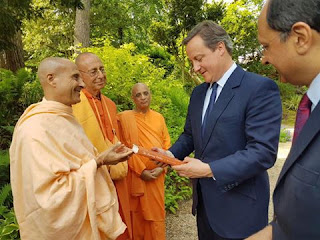 Whether there are Nazis or MAFIA people connected to the Catholic church, or whether there is a secret Satan child abuse cult going on over there -- its hard to prove this stuff one way or other, or else there would have been some lawsuits a long time ago. The Pope and his church have enough critics already and I do not think its required for us to join their campaign.

Anyway! I also don't think meeting with important people is all that hard, if you have a fancy presentation.

Basically the GBC has cleverly morphed themselves into a Hindu congregational meeting hall program, and so they attract mainly Hindus, as we can self-evidently see when we look at photos of the crowds at their temples. So these big politicos want to get some sort of endorsement from the Hindu's communities, and so they glamorize these GBC leaders -- seeing them as the representatives of the Hindus. Of course, most of these Hindus have no idea what is really going on with these gurus.

Then again, some very bad molesters were apparently meeting with British leaders for some years, so its sometimes hard for important people to screen their guests. I don't think this is the real issue, the real issue is, why has Radhanath supported the GBC's deviant guru parampara, and some of its worst case members -- like Kirtanananda?

At the same time Radhanath's book was once condemned by Bhakti Vikas Swami and others, but notice the GBC folks are giving that same book to big dignitaries in the above photo, and not Prabhupada's book. So yes there are some doubts as to RNS's real position even among some of the other leaders. Unfortunately there is a sort of guru club "code of silence" so they never really try to openly criticize each other, unless there is some sort of scandal or legal problem. Many people think that these gurus write their own books so they can self-promote their own agenda.

In any case, most devotees here in the USA know that Radhanath has been Kirtanananda's right hand man for many years, and he is connected to the criminal regime that was going on at New Vrndavana (which was raided by Federal Marshals and the FBI). Bhakti Vikas swami was later on made to withdraw and apologize for challenging Radhanath, because certain members of their program are sort of like teflon dons, nothing negative can be stuck on them.

Will Radhanath be removed? Good question, Some say he already is removed because his Chowpatty temple is not even part of official ISKCON, and he is thus not really a member of ISKCON. As we see however, the GBC is very reluctant to officially remove almost anyone from their guru post, and so they drag their feet even when they know their guru is engaged in deviations, they tend to try and keep them in the guru post. And they even let Radhanath act as the leader of their empire, despite its well known RNS buried Kirtanananda in Vrndavana etc.

Its too bad that all these topics are taboo in your areas, but we are getting readers to our blog from all over the world nowadays, so it seems people in other lands are catching up to the "guru's" numerous scandals, lawsuits, police raids etc. that have been going on mostly in the USA. Most USA devotees are well aware of these things over here, but this seems to have not been seen in many foreign lands -- yet -- but they are catching up gradually. And thus from time to time we are getting nice questions from people around the world.

My general advice is for people to study these issues on our blog here, and at our sister web site http://harekrsna.org and I also made some videos at http://youtube.com/pada1008

Hope this helps. And if you have further questions please write again. ys pd