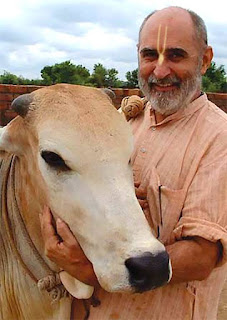 Kurma Rupa's Message From the Bull of Dharma!


After working with cows in close proximity for twelve years I'm convinced that substantial telepathic communication takes place among them. Likewise I'm convinced that cows send thoughts to humans as well and if we tune into the right frequency, we can effectively receive non-verbal messages from them.

A recent example: A street bull I know well entered the small garden to be served. That cold morning I offered him hay sprinkled with hot ginger tea, gur, flour and bran, a mixture he most relishes. After consuming his fill, he sniffed the ground and found a suitable place to sit and ruminate. I sat next to him to chant japa and relish his peaceful company. I thought, “How fortunate am I that I can serve Dharma Personified in Vrindavan.”

The thought he sent me was, “I am grateful to you for that wonderful meal. I especially liked the tidbits of ginger and gur as it takes the chill out of this winter morning.

“In return I offer you this to carefully ponder: A former sannyasi recently attributed his fall from grace to the coercion by his godbrothers to take celibacy vows though he was not fit. Later, his godbrothers again coerced him to take on administrative duties which he lacked the nature to perform. Again the same godbrothers ordered him to accept disciples, though he knew he could not set the proper example to guide them. Following their advice forced him into constant travel, which again went against his grain.

“His struggle to follow their insalubrious advice for thirty-five years caused him such mental anguish that he could no longer carry out his spiritual responsibilities and so he collapsed. Yet in his resignation letter he encouraged his disciples to take shelter of the very same godbrothers who misguided him during his entire monastic career.


“Does this make any sense?” asked the noble bull, ruminating with half-closed eyes.

My brow wrinkled as I prepared to answer in the negative.

He caught it, swallowed and continued: “It makes sense only if you understand the silent rule of the institutional power elite: THE CARDINAL SIN IS TO CHALLENGE OR UNDERMINE OUR AUTHORITY. All other sins are pardonable.

“Since the fallen sannyasi accepts the silent rule he knows that when the contents of his scrotum, prostate gland, and bank account become depleted, he will be welcomed back to bolster the faith of the flock in the fallible elite and again earn the privilege of being on the institutional payroll.”

I pondered this as I watched him regurgitate a large wad of rumen into his mouth and studied the muscle between his eye and the base of his ear expanding and contracting in time with his chewing.

The bull swallowed and concluded, “The highest Truth is to distinguish reality from illusion for the welfare of all. Such Truth uproots the threefold miseries.”
Then he withdrew and I understood the transmission was over.

While I cannot verify the accuracy of the bull’s thoughts nor claim with certainty that they were received without distortion, I think they are something to chew on.

[PADA: Hee hee, right, this is often the excuse for these fallen acharyas, "The GBC made me take this post against my better judgement"! Ummm, really? The other crooks made me drive the getaway car!

If a group of fools tells someone to take the post of diksha guru, and thus to take the karma of many disciples, and thus take the post of absorbing sins like Jesus does, and one is fooled by these fools, then what is one's position? That is why the Isopanisad says -- some fools will select (elect?) another fool as their acharya, and all of them are heading for the lowest of the lowest planets.

Kurma Rupa prabhu is right, even today many of our God brothers clap and cheer (encourage) when they see someone like Jayapataka struggling in his wheel chair. In other words, they are encouraging JPS to artificially take the post of "sum total of the demigods acharya" and absorb karma from thousands of people -- and suffer the dire consequences. Never mind false gurus and their supporters (these God brothers) go to the lower regions after they leave their bodies. And after these gurus fall, they blame the people who supported them to take that post?

There is a giant problem none of these people can escape from, Srila Prabhupada says that when a neophyte acts a diksha guru and takes sins, he gets sick -- or falls down -- or both, which explains the epidemic of these processes within the GBC's guru sabha.

Yep! And then when all this cheating process is over and these people die, Srila Prabhupada says -- these unqualified "acharya" persons (and their cheer leading God brothers) -- are destined for the most obnoxious regions of the universe, that is -- after they are first chewed up by the dogs of the Yamaduttas. Maybe these guys should have listened to Srila Prabhupada instead of their foolish pals?

And then Kurma says, after creating all sorts of scandals, fall downs, lawsuits and bad publicity problems -- in the name of Krishna and the guru parampara, those who orchestrated and supported all this corruption are always welcomed back to have a position on the payroll band wagon. In sum, its corrupt.

The good news is that more of the GBC circle people are starting to wake up to these facts and to speak up, and Kurma Rupa was one these GBC friendly people, but he was in the background not happy with them. Notice! Kurma Rupa is speaking up, Aindra spoke up, the Bengalis in Mayapur are speaking up, Bhakti vikas swami is speaking up, many ex-disciples of Gunagrahi ex-swami are speaking up, and so on, hey, its moving ahead.

How can the same people who cheated you by using their guru voting process, later on save you by giving you another guru -- they voted in -- using the same cheating process?

Bhakti vikas swami still thinks the problem is that the women are being given too much authority. Nope, thousands of devotee women figured out that Bhakti Vikas is a giant cheater for promoting these false gurus, and his being "voted in" as another one of them, and they figured this out a long time ago. BVKS has a long way to go to become as advanced as the CBS news lady who told me these gurus are bogus, and that is the real problem dragging and taking down ISKCON.

BVKS and others are getting there slowly, of course he still thinks the women are the problem when his own promoting the worship of illicit sex is the problem. Anyway, he is starting to chip at the edges and so are a lot of others. Yep, they became gurus because some fools told them they are the next messiahs of the jagat. And Sridhara Maharaja, Narayana Maharaja et all. were all part of this band wagon of GBC guru supporters, and that is what Srila Prabhupada says is the cheaters and the cheated.

Anyway! Good job Kurma Rupa, you are right, this is a conspiracy of "institutional power elite" cheating, and they are posing as gurus by this clique of deviation, and the bull of dharma confirms it. ys pd]
Posted by krishna1008 at 5:56 AM