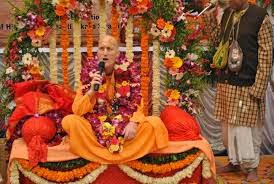 The Grandest Pooh-Bah In the Jagat

PADA: Bhakti Vikas Swami (BVKS) is giving a "lecture series on "Vaishnavism is sexism." OK, the title is offensive for starters. BVKS seems to be blaming the Vedic literature for all the misogynist problems that have developed under his post 1977 deviated GBC gurus. BVKS has made "28 pages of notes" apparently, by watching CNN news and reading all sorts of mundane news stories about women in contemporary society.

Which begs the question, why is a sannyasi meditating on women like this?


We all recall how, maybe ten years ago, the BVKS program got into hot water with the GBC itself when his "GHQ" folks were insulting women and this made even the GBC issue a statement that the BVKS program is "out of line."

Lets fact it, many (most!) women in ISKCON have not been too happy with the BVKS leadership program in any case -- for the exact reasons the Vedas say women are not happy with bogus leaders -- i.e. the women are being exploited and not protected. We have had since 1978 the BVKS / GBC guru's "institutionalized women exploiting and abuse" program going on such as -- "women's collection parties," "marrying 13 years old girls to much older men," "destroying marriages," "not allowing women to have a say about their exploitation" and so on and forth.

We even had "coercing women to divorce and re-marry a guru's loyalist," which is what happened in the Sulochana fiasco. We have had many other reports from women -- that PADA posted over the years -- including: Some women were unable to get sanitary napkins from the "men leaders" in charge of them; Some of them got sick they were kicked out on the street; Some GBC gurus were telling their husbands to ignore these women if they did not accept the bogus GBC's gurus; Some of them ended up living in cars with four children and etc.

Small wonder various misogynist people are still against PADA since we championed these stories over the years. We even have fools saying all our reports over the years are all "PADA's lies," since they are still in league with these misogynists and children repressing folks.

Anyway! The BVKS / GBC program -- as a group -- is seen by many women as being anti-women, anti-children, anti-householder and worse, pro-homosexual, pro-sexual predator and pro-criminal. Overall, women as a group are alienated from the GBC guru's and their loyalists like BVKS. At least BVKS admits he has the reputation for being "a misogynist." Goody. Ooops! Wonder how that happened?

BVKS's "lecture" amounts to a giant mish-mash of incoherent rambling. Is BVKS for (or against?) the alienating of women's program made by the GBC's gurus? BVKS creates more questions than answers -- because he does not actually take a coherent side on this issue. Does BVKS think that shastric citations from the Vedas are responsible for the bogus GBC's oppression of women program? Or is the bogus GBC guru program at fault for creating that problem? He simply does not give us a clear answer.

At the same time, BVKS more or less admits -- it is self-evident -- that there is a problem with the women's alienation from the GBC's program, and BVKS seems to be trying to come up with a convoluted explanation for "why and how" this process emerged post 1977, but he does not know where to lay the blame? In other words, he has no solution.

Yes! It is very self-evident the "women being alienated" problem is still causing considerable grief for the GBC's gurus and BVKS, hence he is trying to come to an explanation / resolution. Unfortunately, he has yet to address the root issue, the GBC's guru program as a group has mistreated women, children, householders, senior devotees and so on, and that is the reason all of them are alienated.

BVKS is apparently trying to shift the blame for all the "troubles" to the Vedas, and to the traditional role women in the Vedas are supposed to have therein. Unfortunately, in the ACTUAL tradition of women in the Vedas, they are protected at every stage and the GBC guru program has instead created havoc and exploiting for women, totally the reverse of the Vedic standards.

What should we do with such statements? Expunge them from the Vedabase? Explain them as the eccentricity of an elderly Bengali gentleman? Or that they are merely the material, not spiritual, teachings of Srila Prabhupada and thus invalid? To simply ignore such statements is not an option because there are followers of Srila Prabhupada who take very seriously the principle “guru-mukha-padma-vakya cittete kariya aikya ara na kariha mane asa” and who will not very easily allow Srila Prabhupada’s words to be forgotten or recast in the light of various popular theories.

Undoubtedly, we have to consider carefully how to present and apply Srila Prabhupada’s teachings to a world that is not very open to them. But we are in danger of losing our connection with Srila Prabhupada if members of our own ranks adopt the prevailing dogmas of the misled civilization and employ them to attack those followers of Srila Prabhupada who are trying to uphold his message in its most pristine form.

[PADA: Right, so BVKS supports a misogynist -- pro-deviant, pro-homosexual and pro-criminal "acharya's" program, which bans, beats. molests and assassinates devotees, and exploits women and children terribly, and then he talks about "the pristine original teachings." The program he supports is attacking women, children, devotees, and attacking marriages, attacking the system of protecting women and children ad infinitum, and he puts a nice wrapper on this warped program and says it is pristine?

BVKS has to address the root issue, the women, the children, the devotees, the cows, have been exploited and mistreated by his bogus guru's program, and this has nothing to do with the pristine teachings, its a deviation created by the program he helped create, and he has supported and endorsed. ys pd]

Please accept my obeisances. All glories to Srila Prabhupada. As you are undoubtedly aware, your disciple Caitanya dasa has been writing a blog entitled "Hare Krishna Diary" as a vehicle for propagating your "teachings." Throughout it, purporting to quote Srila Prabhupada, he pervasively vilifies women as "whores," "prostitutes" and "animals" and consistently vilifies them in abusive language in numerous additional ways.

His statements are deeply disturbing and offensive. Even more disturbing is the fact that you are at the very least allowing, if not encouraging, him to do this, which reflects very poorly on you and casts you in an extremely unfavorable light. That you would impart such a distorted and dangerous version of "Krishna consciousness" to young, impressionable devotees in your care reveals a serious deficiency in your judgement and calls into question your qualification to act as an initiating guru on behalf of ISKCON.

In addition to his own distasteful statements, Caitanya dasa also quotes and provides numerous links to your texts from the infamous "GHQ" conference. www.vnn.org/world/WD9811/WD18-2521.html. This conference and the statements made by its members (only one of whom is known to have ever had the decency to apologize) were emphatically repudiated by the North American GBC 10 years ago. Therefore it is most surprising that you appear to be encouraging your disciple to actively propagate these very statements, which the GBC described as "demeaning," "ill intended," "ridiculing," "berating" and "vilifying" and thus strongly denounced as "crossing the line of decency, morality and Vaisnava etiquette."

In this way, whether you have merely tacitly allowed these things to go on (though one has to wonder how your newly-initiated disciple, a mere 2-year devotee, happened to come into possession of all of your old GHQ writings and one has to to assume that he would surely not have published them without your permission) or whether you have actively encouraged them, you are fully responsible for the abhorrent, vulgar, offensive and abusive statements made by your disciple and consequently must be accountable to the Society of devotees for them.

Therefore I am requesting you to please do each of the following:

1. Publicly apologize for the offensive and disturbing statements made by your disciple with your tacit or overt permission. As these statements are being publicly disseminated on the Internet, a public apology from you is similarly in order.

2. Compel your disciple Caitanya dasa to also publicly apologize for the offensive and disturbing statements he has made.

3. Compel your disciple Caitanya dasa to remove this offensive blog from the Internet. Its existence is a liability for ISKCON in every way.

4. Forbid your disciple Caitanya dasa from ever again using the sacred words "Hare Krishna" in any title or in any writing disseminated via any medium which propagates hateful, vulgar, offensive, abusive and misogynistic rhetoric. Calling that repugnant blog the "Hare Krishna Diary" is a disgrace to the Holy Name and a disgrace to Srila Prabhupada that dishonors his legacy and everything he sacrificed to make "Hare Krishna" a household word.

One devotee for whom I had much respect and have know for more than 10 years recently wrote about watching a football game on TV. I responded that it was an absolute waste of time, and that these kind of activities keep us in the material world life after life. His response was that when he mentioned my comment to some other devotees "everyone was laughing so much , that because of so much immaturity and fanaticism, they could only laugh at it."

This morning I deactivated my account because I am saddened to see the attitudes of ISKCON devotees. Your servant