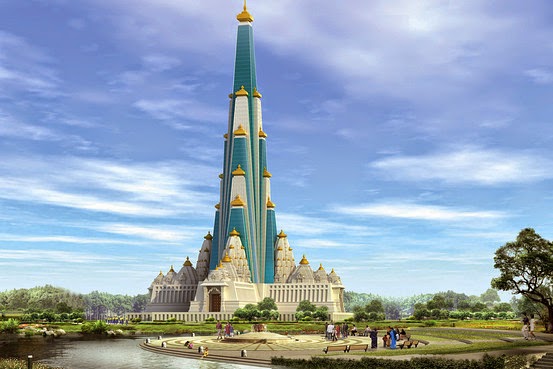 Vrndavana Temple Will Be India's Tallest 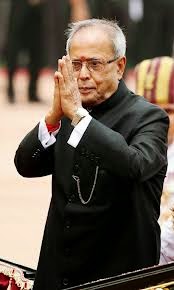 Vrindavan, 2014.10.29 (TNN, Brij Khandelwal): President Pranab Mukherjee will lay the Foundation of the 213 metre world’s tallest Sri Krishna temple in Vrindavan in November.  UP governor Ram Naik with the chief minister Akhilesh Yadav are also expected to attend the special function, being organised by ISKCON (Bangalore).

District magistrate Rajesh Kumar along with all senior officials visited the site and interacted with the promoters of the project to prepare the ground to accord a warm welcome to the temple.  A helipad is now being developed close to the site. According to Kamal Yogi, an official connected with the project said a large number of state ministers and political leaders were expected for the function.

Construction work has already begun on the piling for the pillars of the Chandrodaya Mandir, using latest technology. The chief project director Bharat Prabhu who keeps shuttling between Vrindavan and Bangalore said, “The Rs 300 crore project of the world’s tallest skyscraper temple for Lord Krishna, will take five years. We are using the world’s latest technology and engineering processes to ensure a minimum life of 500 years for the gigantic structure that will go a long way to promote and nourish Sri Krishna consciousness, especially among the youth.”

The project is conceptualized and is being executed by ISKCON from Bangalore, who also bring Akshaya Patra, the world’s largest NGO run midday meal program in the country. Prabhu said “this is a culturally and socially driven project which aims to put Vrindavan and India on the world map of iconic heritage structures. The project also employs many technological innovative solutions to ensure environmental sustainability.”

This grand temple with monumental proportions and iconic architecture shall harmoniously combine elements of both Indian temple architecture and modern architecture. A look-alike of the verdant forests of Vrindavan, consisting of twelve forests (dvadasha kanana) of Braj will be recreated around this magnificent temple. Water from the Yamuna will be lifted and pumped to the meandering rivulet that will allow for boating and support aqua-life peculiar

JD: You have to understand that Iskcon in India, both versions, have had a lot of success attracting young, educated Indian men. I guess it is parallel to what happened when Bhaktisiddhanta Saraswati was preaching in Kolkata in the early 20th century, just when there was a big social upheaval going on with the independence movement.

Maybe India hasn't stopped having these upheavals, but certainly ISKCON appeals to young men who are seeking an identity that is both Indian and modern, in which they don't have to sacrifice their heritage entirely in order to show that they are capable of achieving great things. Projects like this appeal very much to them. It is not really about Radha and Krishna and the Vrindavan mood, but does it matter?

A dd: I'm sure there are a lot of people in Vrindavan who would like to see a lot of money like that used for something else which Vrindavan needs. Perhaps the builders of it expect it to bring in rich people and have them give the money to do something better for Vrindavan. I don't have so much faith in such ideas while urgent issues remain unattended to.

VGC: Few months back, they were approaching prominent Goswamis and businessmen of Vrindavan so their (Goswamis/Businessmen) friends/followers could buy 20 million rupees flats in their temple compound. I was wondering about this.

JD: Well, just speaking as objectively as possible. The current theory is "West is good, East is not so good. Modern is good, the past is not so good. Money is good, no money is not so good." So tourism is good, pilgrimage not so good. Because the former implies more money. Hotels. The ISKCON mindset is totally in harmony with this. Big temple means wealth, because wealth attracts wealth. Prabhupada was thinking like this all along, don't kid yourself.

When he built the Mumbai temple and all the Bollywood people started coming, rich industrialists became life members, the guest house was supposed to be "world class" and so on, catering to the wealthy. Prabhupada recognized that you cannot convince a rich man with poverty. Like it or dislike it, poverty is for the bhajananandi. Sannyas in the world is the teaching of the Gita. That is what Prabhupada wanted. You cannot say that this project is anything other than a continuation of his policy.

VGC: Vrindavan is not Bombay. Its a land of Love. Vrindavan has already many wealthy big temples. Anyways, I hope it will bring positivity to our Vaishnavism.

M Das: As far as I understood, this temple project is not actually a main branch of Iskcon as I understand, It's from the renegade Ritvik Bangalore Branch. Correct me if I'm mistaken

[PADA: Yes, this is a project of ISKCON Bangalore. Srila Prabhupada wanted big temples being supported by high class business men, industrialists and so forth. Vrndavana has all sorts of major infrastructure problems at present, and it needs LOTS of money for development, repairs, and updating.

And this program will bring in money and government interest into advancing and securing the infrastructure. The new temple will be using up to date things like modern solar power, low impact greenery, and so on. In any case, it will bring lots of people to see the holy dhama of Vrndavana, and that is a good goal right from the start. Yes, lots of young people will become attracted, and that is what we need. We need to make more vaishnavas, that is the highest goal of life, to help others think of Krishna and to become His bhaktas. ys pd]