[PADA: This is a very good summary.]

Did I Leave ISKCON or Did ISKCON Leave Me?

Among American political parties there is an old saying: "Did I leave the Democratic Party or did the Democratic Party leave me?" As an example, John F. Kennedy, a liberal Democrat President from 1961 thru ‘63, would be considered more conservative than today's "conservative" Republicans. This is what has happened to ISKCON with it's tryst with Mission Drift.

[PADA: Good. Most of us were forced out of ISKCON, we did not leave, we were pushed out by force.]

RD: In yesterday's Sun, His Holiness Bhakti Vikas Swami bravely stepped forward with the sweet wind of truth regarding the deplorable situation in ISKCON today. The fact is that today's Hare Krishna Movement just isn't the same one that Srila Prabhupada founded in 1965. The International Society for Krishna Consciousness has become the International Society of a Caricature of Itself.

When a political party (whose principles are founded upon convenience and mental speculation) adjusts its point of view to changing times for the sake of the votes of the ignorant, it is considered an adept maneuver. Not so for a sampradaya founded upon rigorous and never-changing principles. When this "mission drift" affects a sampradaya, the only conclusion is that deviation against the orders of the Spiritual Master has raised its ugly head.

ISKCON has suffered a devastating and terrible attrition of original members due to a variety of reasons. For many, the reason was clear: unrestrained senses. To be honest, there has been maybe a hundred beginner sannyasis who have blooped due to an overwhelming desire for sex life. But many, many thousands of sincere and non-self-aggrandizing devotees have left ISKCON because it just wasn't the same ol' movement that Srila Prabhupada started any more.

After the Zonal Acaryas nearly sent ISKCON into the footnotes of history, one would think that a GBC (with a mere modicum of common sense) would deign to set ISKCON back on track. But no, the desire for hero worship among many of the supposed "leaders" has caused a colossal mission drift based upon the Good ol' Boys Club agreeing to protect the devious interests of one another. "You scratch my millionaire, mansion-dwelling, usury-charging back and I'll scratch yours."

As an example, one can only empathize with our Godsister and -brothers and their gurukuli offspring who were molested. Today, when Bhavananda is sheltered at Mayapur—what sort of message does that send to faithful householders who gave their own youthful lives and their children for the glorification of their Guru Maharaja? Naturally, such devotees do not wish to have anything to do with a movement that favors the predator and shuts out the victims wholesale. No reasonable person can blame them for not wishing to associate with people who have caused them so much pain. Therefore the GBC just cold-shoulders those innocent devotees whom they should be protecting, in the name of protecting their own interests.

Practically the only original members of ISKCON who remain—with very few exceptions—are power hungry politicians who draw a sort of personal profit from the institution as though it was their personal ATM machine. The silence from the top — when it comes to mayavadic practices, minimization of the Founder-Acarya, mundane hero worship, worldly scholarship over Vaishnava studies, Green card beggars— is deafening. They simply turn up the volume over at ISKCON News to send a happy face to one and all about yoga being taught in airports, or ISKCON Schools teaching about Martin Luther King, or Bob Dylan's birthday.

As seen in yesterday's Sun, at long last a truly respected member of ISKCON's elite saffron army of sannyasis was able to no longer contain his disgust at the rampant deviations within the society. Bhakti Vikas Swami is now very publicly telling it like it is and, instead of being thanked for his simple honesty, Dandavats (the GBC site where he first submitted his article) has not paid him the simple courtesy of a response. This is shameful on the part of Praghosh das, the GBC webmaster of Dandavats.com.

Dandavats seems to have plenty of room for mental speculators who publicly express doubts about Srila Prabhupada's spiritual realizations, but when it comes to a little self-introspection, they turn into ice cubes. This lack of etiquette on their part, treating a genuine sampradayic spiritual successor and representative of Srila Prabhupada with such coldness smacks of the lowest form of cowardliness.

Truth be told, the reason that the august body of Good ol' Boys cannot find words to defend the programs that His Holiness rails against is because there are no such words—in any language. Because many of their programs are deviations and are against the orders of Srila Prabhupada pure and simple—and well they know it—they simply roll over and play dead when anyone speaks up. Those hypocrites who preach one set of values to their underlings and follow another more convenient set of adjustments for the enjoyment of their own clique are the greatest frauds. And abject hypocrisy at the top is no means to extend the sampradaya. Rather, it is the means of killing the only genuine spiritual movement on the planet.

Bhakti Vikas Swami has distributed one million books in pursuance of Srila Prabhupada's teachings. Like many other accomplished devotees, Bhakti Vikas' tremendous input into the Hare Krishna Movement has been by and large ignored by the self-aggrandizers, whose collective egomania is tearing the Society asunder. For example, ISKCON's GBC has been treating the off-the-wall ramblings of Bhakti Tirtha in the form of his multi-volume Spritual Warrior series as enlightened shastra for decades now. Yet when a genuine and valuable addition to the sampradaya in the form Bhakti Vikas' Shri Bhakti Siddhanta Vaibhava sees the light of day, the feat is all but ignored (with the exception of a few self-serving saccharine grins).

Shri Bhakti Siddhanta Vaibhava is a historical record that weaves together many episodes in the life of this great saint of the first half of the Twentieth Century, yet the GBC gives more importance to swanky and expensive japa retreats or a meeting with a Bollywood actor, or Radhanath playing the harmonica. If the GBC body had any idea of what their duty should be, then Bhakti Vikas Swami as the author of this magnum opus would have been officially recognized with the title Bhaktivedanta in gratitude for this valuable addition to the sampradaya. But instead, he is forced to join a long list of devotees whose literary accomplishments do not merit even a nod from the boys over at the country club. It is a sad fact of life that those whose minds are geared for personal profit see all others in the same light, and this means they view anyone that might emerge as their rival with suspicion. And that, in a nutshell, is the raison d'etre for the GBC's cold shoulder policy.

Srila Prabhupada once introduced his early disciples to a group of his Gaudiya Math Godbrothers. He noted that one was an author, another was a scholar, another spoke Sanskrit as though it was his first language. Then His Divine Grace added, "And they are all useless because none of them know how to preach." When Srila Prabhupada told us such things, he was actually warning us that domain acaryaship, the "property disease that ripped the Gaudiya Math to shreds" might take root in ISKCON. Or that mundane scholarship might one day become exalted over sastric studies. Or that neophyte men might one day jump onto the holy seat of their own Guru. His Divine Grace was warning that their deviations could become our own. And, prophetically, for thirty-five years and counting misleaders have steered ISKCON in a direction other than that which the Founder-Acarya intended.

It is true that ISKCON has continued to build temples, but even in construction projects we find that the Gaudiya Math principle of domain acaryahood is a motivation behind many of them. And it is for this reason that ISKCON has placed more emphasis upon brick and mortar than on the human element. In order to show their humanity, our "leaders" are building hospices for devotees who have one foot in the grave, but these same devotees were never encouraged once they were ten minutes into middle age. In death, ISKCON's nameless rank and file become convenient pawns used only for reflecting the altruism of wealthy leaders for whom compassion is a business.

If there are any men or women of conscience who remain in ISKCON, readers of this plea, they owe it to this man of truth — HH Bhakti Vikas Swami — to stand alongside him for his brave act of conscience. His words are an attempt at trying to instill a sense of Vaishnava ethics into the hearts of the old guard before Prabhupada's movement is exploited out of existence.

As fed-up voters say, "Throw the rascals out." And that is exactly what is needed to place ISKCON back on track. Either the proponents of mundane principles on the GBC (and those who give them the nod of approval) shape up, or they ship out. The society has experienced one colossal train wreck after another, yet the "leaders" maintain their course of full steam ahead when it comes to protecting the interests of their fellow elite. And anyone who has some knowledge of the inflated bank balances of some of these millionaire renunciates can understand why. When the train wrecks, they will just hop into their own limousines and speed off, leaving the mangled bodies in the wreckage behind. It has been done many, many times in the past and it will certainly happen again.

For example when Harikesa became God and blooped, thousands of devotees lives went to hell, while the GBC only cared about paying Harikesa his huge severance pay and protecting his interests. (Harikesa's mansion can be seen on his website, though those who tried to serve ISKCON through him are as nameless as the tomb of the unknown soldier).

Any thinking devotee must today stand with His Holiness Bhakti Vikas Swami in this hour of truth. The very movement of Srila Prabhupada is at stake. We must show any rascal who uses Prabhupada's teachings for his own ends that concocted and self-congratulatory programs will no longer be tolerated. Krishna consciousness is a genuine, authorized and bona fide process meant to uplift the entire world based upon the highest principles. Prabhupada did not come to the West as a penniless mendicant to create a few men who get rich at the expense of his genuine disciples. 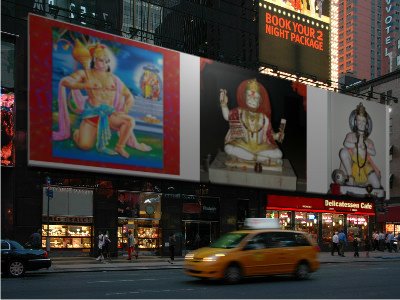