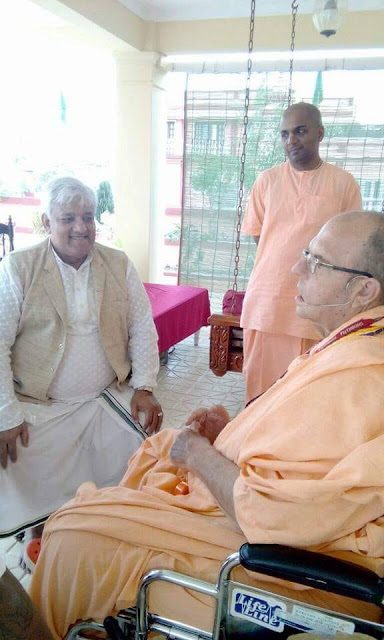 Related to the sexual predator abuse issue as found here:

JD: This is probably one of those posts I will delete when I realize its pointless and nothing will ever change. Looks like we got one of the pedophiles back in Mayapur. That's Nitaichand "Swami" on the left. Besides being a rapist, he used to go around threatening local villagers at gun point to sell their land to ISKCON. This is the "great service" ISKCON credits him for.

Once a local villager said "I used to have land here and Nitaichand Swami came and told me I had to sell. I said I didn't want to sell. The next morning I found my tractor burnt, which took all my life savings to buy. Nitaichand came back and I sold him my land."

Once in the mangal arati during Gaura purnima I was in the temple room with thousands of devotees. In the dark suddenly someone grabs me and jerks me back. It's Nitaichand Swami. Apparently he felt I was obstructing his view. After mangal arati I go out and chant japa in the lotus park. Nitaichand Swami finds me, and says "You know my grandfather was a disciple of Bhaktivinode Thakur. That's why you should be careful around me. You don't want to commit offenses to me."

I didn't even care that he had pulled me aside in the mangal arati, but this guy had some psycho problem so he felt the need to search me out, out of the thousands of devotees there, to tell me his grandfather was a disciple of Bhaktivinode Thakur. I don't care who your grandfather is or who you are and I don't have any interest to talk to you.

JD: Adridharan has to live in hiding despite doing nothing wrong, but this guy can move around freely?

CD: Is he Indian by birth? Bengali?

JD: Yes, was a local goonda before joining ISKCON.

CD: Perfect, just join some big institution (religious or political) and get rid of sins! Like medieval indulgences!

VD: He caused Iskcon so many problems in Kenya posing as a sannyasi and then running off with one of the young girls from a Gujarati family. He was sent to Kenya by the GBC so as he could hide away from any repercussions with his paedophile activities in Mayapura.

JD: I remember I was next to the camera when this (GBC Maypura meeting) photo was taken. Most of these people are dead or gone. 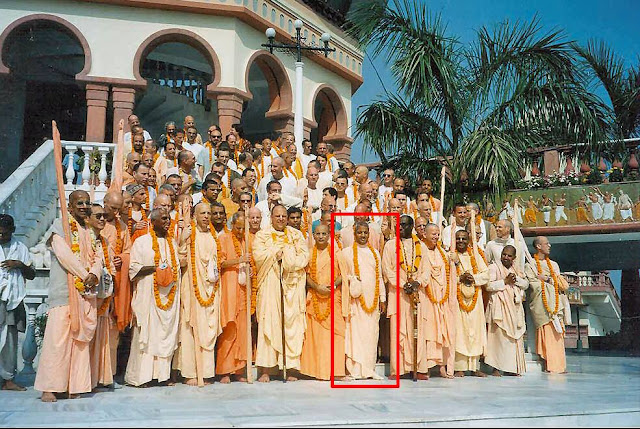 Every single person in that photo knew he was a pedophile and protected him. For the record, he was sama-darshinah... he would rape boys and girls equally. There isn't a single "real man" in ISKCON, because if there was, these people couldn't show their faces.

Background info on this guy:


MF: Don't delete the post, Nitai. Thank you for telling us!

PADA: They are still not repenting, they said acharyas are often debauchees in 1979, they still say that now. They simply added many more debauchees to their guru parampara subsequently. They defended goondas in 1979, they promote and defend goondas now. Nothing has changed. No repentance. ys pd


JD: I remember this when they tried to get the pedophile approved to be an initiating guru in ISKCON: "In 2006 his supporters there tried to convince the GBC to overturn the CPO sanction and allow him to begin giving diksa in the ISKCON Montreal community."
The guy even steals all the money from the tip jar at a bar he owns:

"Defeated in court, and with the college defunct, Kikla and Nitaichand Goswami moved to Greenwood, B.C., where they purchased three local businesses: the Greenwood Motel, the Pacific Grill, and the Windsor Hotel — known locally as "the Saloon."

"We had an agreement that I would get 25 per cent of the tips every day," said Stevens in a telephone interview from his home in Greenwood. "But every night, before the end of the shift, all the money in the tip jar just disappeared."