Rocana: We worship the acharya. Nope, changed my mind! 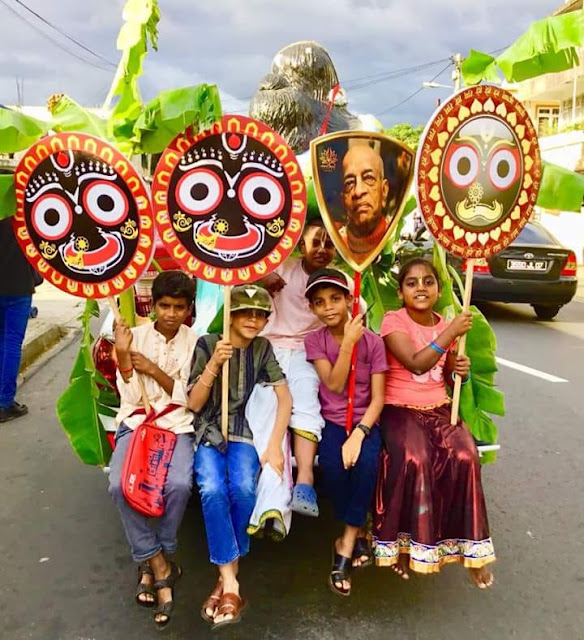 Why don't we see people using the faces of these GBC gurus very much any more?

Today, all the warring camps that have spawned from the original, pre-samadhi ISKCON share a common hypothesis, which is that before departing, Srila Prabhupada ordered us / GBC to implement a specified process pertaining to future initiations in ISKCON. In my opinion, this supposition is incorrect. Srila Prabhupada followed in his Spiritual Master's footsteps and proposed that the focus of worship be on the Sampradaya Acarya.

[PADA: Which is what the ritviks have said all along? Everyone should worship the sampradaya acharya, whether he is physically present or not. And the bhogha, the disciples, the money, the buildings and everything else -- should be offered to him -- and thus up the chain to Krishna. If the bhogha and the disciples and everything else were offered to him all along and he says "do not change anything," then that process should continue. Rocana is the person creating the controversy here, he says that we have to change the system established by the acharya. Where was this change ordered?]

This irresolvable controversy centers on the existence - or absence - of proof positive.

[PADA: But Rocana just gave the "proof positive" above, that we ALL have to focus on the worship on the acharya? He himself says that we should ALL worship the sampradaya acharya, whether so-called senior person, brand new person, or anyone else involved in the process of the Krishna religion. That means, everyone has to accept the sampradaya acharya as their link to Krishna, and this is also the sum and substance of the ritvik conclusion. First of all Rocana says, the only existing proof is that we all have to accept Srila Prabhupada as the current sampradaya acharya, then he says, there is no proof we should do so? Rocana is arguing with -- Rocana?]

To date, no unequivocal evidence of Srila Prabhupada's official authorization has come to light approving his senior disciples' assumption of the responsibilities of diksa initiation.... what to speak of their absurd title, "Zonal Acarya". The same problem holds true for the Rtvik proponents, who have no proof positive in support of their conclusions.

There is no proof that only an uttama can be the acharya?

There is no proof that neophytes will suffer if they try to absorb sins as diksha gurus?

There is no proof that neophytes are falling down left, right and center when they try to assume the post of diksha guru?

There is no proof that Srila Prabhupada says, acharya-upasanam, everyone must take shelter of the acharya?

And so on and so forth?

All parties are relying on interpretations of the very same vague statements and institutional documents, while coming to diametrically opposing conclusions - which indicates just how inconclusive the "proof" actually is.

[PADA: And what has Rocana proven in all this time? He says worship of the GBC is a bogus platform (after he was one of their big reformer cheer leaders), and the ritviks (who are worshiping the bona fide acharya) is another bogus platform, so he has no platform at all? There is no conclusion? He keeps using the words "vague" and "inconclusive" and that is the problem with his idea all along, there is no conclusion other than -- everyone else is wrong, but what is the right idea, he does not say? Srila Prabhupada says the only way to attain Krishna is, to worship His pure devotee. Why is that a vague concept?]

It appears to me that no irrefutable document or statement has yet been found or is likely to be found, hidden away within Srila Prabhupada's archive. After twenty years of futile research, exponents have had to resort to concocting a meaning from the now famous July 9th letter, preceded by the May 28th room conversation. When challenged on their dubious documentation, most Rtviks ultimately resort to the conspiracy theory.

[PADA: There is no conspiracy theory? Srila Prabhupada said all along, after I am gone there will only be leaders (neophytes) taking the post of managers and / or ritviks. No other idea was ever floated by him the whole time?]

Neither ISKCON, the Gaudiya Matha nor the Rtviks entertain the notion that Srila Prabhupada might simply have followed in the footsteps of his spiritual master, asking that we cooperate and await the next Sampradaya Acarya. Yet considering their elevated spiritual status and pre-determined missions, it seems logical that nitya-siddha shaktavesa avatars would depart in just such an untraditional manner.

[PADA: What? Rocana just said we have to follow the instruction to continue the worship of the acharya? That is the ritvik idea? Why is he not cooperating with Srila Prabhupada on this point?]

The ill-conceived notion that all diksa initiations within ISKCON should be carried out by Rtvik priests representing the departed Srila Prabhupada is inconsistent with all of his teachings, all sastra, all predecessor Acaryas, all sampradayas, and all Vedic and Pancaratrika tradition.

[PADA: OK, so now Rocana says, we should not continue to worship the acharya because that idea is not found in shastra. Where in shastra does it say the worship of the acharya should not be done? And since Rocana says that new people cannot accept Srila Prabhupada as their diksha guru, who will worship the Krishna deities that Srila Prabhupada installed all over the world? Don't we need initiated brahmanas to do that work? How can the deity worship continue if there are no brahmana followers of the acharya to perform that function? Rocana never says ...]

This conception will lead to a digression from pure Vaisnava philosophy into religiosity. The concept of recognizing and immortalizing the Sampradaya Acarya is commendable. Expanding this vision into post-samadhi diksa unnecessarily complicates the Sampradaya Acarya notion. For all the reasons listed above, this idea becomes a lightning rod for those who wish to relegate Srila Prabhupada to normalcy for their own envious reasons.

The Rtvik manifesto, "The Final Order", appears to be modeled on the western Judeo / Christian model of organized religion. Srila Prabhupada is transformed into a Christ-like personality who, in absentia, is supposedly willing and able to forgive all the sins of those who are baptized / initiated. Rtviks are, after all, priests by definition. Organizations like the IRM are establishing procedures for Rtvik initiation that will likely evolve over time in ways that create even greater similarity to the western model. The West Coast Rtviks have absorbed the "poisoning of Srila Prabhupada" conclusion into their depiction of Sampradaya history. The result engenders a similarity to the persecution and crucifixion of the Biblical Christ. Religions tend to promote sentimentally dramatized stories over and above disseminating spiritual philosophy.

[PADA: Well if the Christians are not going to worship Jesus, who else should they worship? And Srila Prabhupada says -- Jesus is still taking the sins of his sincere followers even now, so if Jesus is not going to continue in that role, who will take that post? Again, Rocana never says? He can dismantle a process, but he has no process to replace it?

And if the Krishna devotees should NOT worship Srila Prabhupada as their current acharya, then who else should they worship? And if Srila Prabhupada says he is being poisoned, then that means Rocana was very foolish when he went along with the idea that these "poison sabha" people are "gurus" who need to be reformed. Reforming Judas is not the process in any event, we have to jettison Judas and his sabha.

And what exactly is wrong with the Christian's idea to worship their guru? They should worship someone else, ok maybe, but who is that someone? And if Srila Prabhupada says he is being poisoned, and there are a lot of confirming details, should we simply ignore this issue because "its like the Christian's idea of Jesus being crucified"? And! What is the superior explanation for the poison complaint? How does Rocana explain the poison issue? He doesn't.]

The very supposition of Rtvik-ism, as described by its proponents, depends upon an institutional context for its implementation. While the IRM began in an institutional setting, the West Coast Rtviks have not yet explained how their process will function outside the institution. Who decides which personalities are qualified to perform the Rtvik priestly functions? What are the priest's responsibilities before and after initiation? So many questions have been put forth but remain unanswered. Promoting the Sampradaya Acarya vision of Srila Prabhupada is so much more digestible.

However! Worship of Jesus is generally facilitated by the institution, but its not dependent on it. At the same time, at least some form of institution is generally required to spread the religion, to conduct practical institutional programs like: printing the Bibles; training people in the church tradition; guiding the people in worship, coordinating the missionary process -- and so on.

Yet if a person does not think the local priest properly represents the religion, they can also just worship Jesus at home on their own. However the principle of worship of the acharya always remains. Right now the Catholic Church is under many criminal investigations, but many of the followers will continue to worship Jesus with our without their formal institution.

Now, do we depend on a formal institution? Not always, but its something Srila Prabhupada wanted, a regulated formal mission. First of all, that is what a formal religion does. It appoints priests, and it oversees and supervises the priests. And then there is a council of church elders (a brahminical council) which monitors the activities of the local priest, supervises the churches financials and so forth. And they all report their local activity program to a national governing council of churches (a GBC).]

ISKCON leaders are also into sentimentalism as opposed to philosophy. Many have written autobiographies that tell unverifiable pastime stories involving their relationship with Srila Prabhupada. Many Bhagavatam classes morph into story-telling sessions wherein the speaker puts a little more shine on their public image. Srila Prabhupada's absolute spiritual position as Sampradaya Acarya is never philosophically presented. Instead, he is depicted in the manner of the speaker's mental conception.

"The Supreme Lord Sri Caitanya Mahaprabhu, in pursuance of the teachings of the scriptures enjoins all absence of conventionalism for the teachers of the eternal religion. It does not follow that the mechanical adoption of the unconventional life by any person will make him a fit teacher of religion."
Putana by Srila Bhaktisiddhanta Sarasvati.

[PADA: OK so we have to all take shelter of the acharya, except that is a nonsense institutional Judeo / Christian deviation. Rocana is arguing with -- Rocana. ys pd]