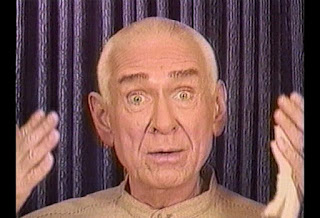 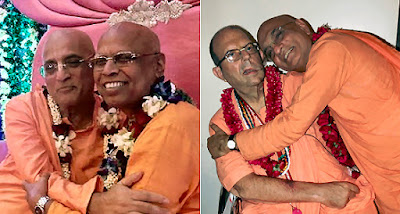 *In praise of our dearest God-brother Jayapataka Maharaja*

At a time like this we can’t help but recognize the extremely exalted spiritual position of our very dear god brother, His Holiness Jayapataka Maharaja. When the whole world was in total anxiety about the outcome of the very critical operation to transplant his lever and kidney, he seemed to be totally unperturbed and confident.

[PADA: When Jayapataka told me that Jayatirtha has been appointed as Krishna's successor acharya "Srila Jayatirtha Tirthapada Maharaja," and us "Srila Prabhupada disciples" have to get in line and assist the GBC in promoting Jayatirtha as the acharya of ISKCON, he was very confident. Does that mean Jayatirtha was Krishna's successor acharya, just because some fools had confidence he was the acharya? Bhakti Caru swami seems to think confidence equals -- being truthful and bona fide. Yes, Jayapataka was very confident that the 11 are pure devotee successors to God, but he was clearly -- mistaken.

There are all kinds of people -- in all kinds of illusion -- over all kinds of issues -- all over the material world, and they are still very "confident" that their view is correct -- even when its not. Fine except, Srila Prabhupada also had a lot of confidence when he said to us -- that we neophytes cannot be diksha gurus and absorb sins, because by our doing that -- that will cause us to suffer and fail. Why doesn't Bhakti Caru swami have any confidence in that instruction?]

He was waiting in Chennai for months for those organs to be available from a suitable living source. Therefore when they became available he seemed to be excited, rather than becoming worried, and when he was being taken to the operation theatre, his mood was of total confidence as if he knew without a shadow of doubt that the operation would be successful.

First operation, the liver transplant, was successful. We felt somewhat hopeful, then we started to get one after another good news: His kidney transplant also was successful, and after about 10 hours of surgery he was taken to the ICU. He was supposed to be under total sedation for two days. However, the next day they took him out of it and we got the good news that the transplanted organs were functioning effectively and the ventilator had been taken out and he was breathing on his own. We felt thankful to Krishna for listening to our prayers and became confident about his situation.

When he came out of his sedation and regained his consciousness, the first words that came from his mouth were “Jai Jagannath”. The doctors began to wonder whether this was a miracle. Yes it was indeed a most wonderful miracle - an inconceivable display of Krishna’s mercy upon His very dear devotee.

The latest news is that the transplanted kidney has been functioning so well that he passed 1.2 liters of urine. Whereas before the operation he was having dialysis thrice a week. The operation had been totally successful. Today, he came out of his bed and sat down on a chair for 20 minutes in the morning and one hour in the afternoon. These are all a very sure sign of remarkable recovery.

When you look back, we can see that Jayapataka Maharaja always had been an amazingly outstanding devotee. When Srila Prabhupada decided to take our movement to Mayapur, Jayapataka Maharaja fully committed himself to that project recognizing that it was the most important mission of our movement.
He not only committed to that mission but dedicated his whole life to it.

Life was not easy in Mayapur those days. Not only did they not have proper living facility but there was no resources to even take care of their day to day needs. However, that difficult situation did not discourage him, rather inspired him to continue to serve Srila Prabhupada with full conviction. Since then what he had done in Mayapur is known to everyone.

After Srila Prabhupada’s disappearance, he started to give initiation as one of the first eleven initiating spiritual masters.

When most of the devotees who assumed that responsibility became victims of Maya’s allurements and fell down from the spiritual path, he carried on without slightest deviation.

[PADA: When most of the other 11 were falling down Jayapataka was one of the biggest cheer leaders for keeping them in the post, he was even in favor of  "reinstating" some of them when there was WELL KNOWN widespread deviations going on. OK so MOST of the first wave of gurus deviated and fell down, and simultaneously, they voted in another wave of acharyas, like Bhakti Caru swami.

How can deviants vote in acharyas? Same trouble we are having now with the Rocana / Torben / Ajit Krishna / Kim Moller / Hanuman Croatia sector, yes MOST of the first wave of acharyas fell, if not some of them were fools, deviants, sexual predators, criminals etc. which is why we accept that they are qualified to vote in more acharyas? How can a bogus person vote in "more acharyas"? And what is acharya voting and so on and so forth?]

When he had the stroke in Mumbai in 2008, the possibility of his survival was practically nil.

[PADA: Well yes, Jayapataka was seen screaming and yelling about his lawsuit with Bangalore (he objects to us people who are worshiping Srila Prabhupada as the acharya) and he worked himself into such an angry, vicious frenzy, he got a heart attack / stroke condition. How is that the sign of a pure devotee? He is angry, he is shouting, he wants to spend $20,000,0000 on lawyers to sue anyone who worships Srila Prabhupada, if not have the Prabhupada folks banned, beaten, molested, sued and / or assassinated, and that is the sign of a saint?]

That evening Mr. Ashok Hinduja, the owner of the Hinduja hospital where he was being treated, came along with the chief medical officer of the hospital and the head of the neurosurgery department, to meet us at the Juhu temple and informed us that we should prepare ourselves for Jayapataka Maharaj’s departure from this planet that night. However, we saw how inconceivably his recovered.

[PADA: He really has not recovered? He first of all made himself into a giant fat walrus by eating like a hog -- while a number of the children in the GBC's guru-schools reported being starved and being fed rotten food. Then, he was screaming and yelling like a fool, and he said we have to sue the people who want to worship Srila Prabhupada and not worship his illicit sex with men, women and children messiahs -- and that resulted in his getting a stroke. So he was apparently stealing the food meant for the children, and that made him blow up to the size of a walrus. Then he was screaming like a lunatic, and that made him sick. No, he has not recovered. He is alive, just about, that's all.] 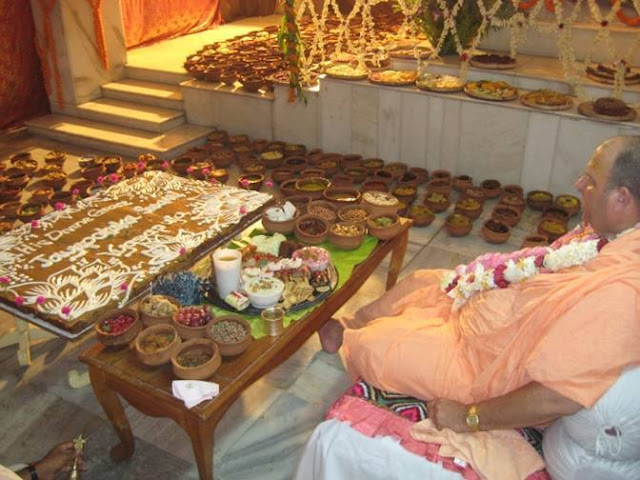 Am I fat enough yet?

His body may have been affected by that stroke but his mind, intelligence and spirit was not at all affected. Rather his memory and intelligence became even sharper and his determination to serve became even more stronger. He started to travel around the world, preaching and making disciples and now through this operation in Chennai we can see how wonderfully Krishna is protecting him. All these wonderful happenings are definite indicators of an extremely exalted devotee who has dedicated himself completely in the service of Krishna and is being taken care of by Him in the most wonderful way.

Although we long to see Jayapataka Maharaj in his vibrant youthful form - shooting arrows to hit the bull’s eye, stick in his hand marching forward with a group of devotees following him to face the dacoits, swim across the Ganges like a champion swimmer, broadcasting the glories of Sri Chaitanya Mahaprabhu in front of thousands of spellbound audience, but still we consider it to be our great good fortune that he is still with us to push Sri Chaitanya Mahaprabhu’s mission fulfilling the dreams of Srila Prabhupada. Just his presence gives us so much confidence and brings so much joy to our hearts. We are so thankful to Krishna for listening to our prayers and letting him be with us. 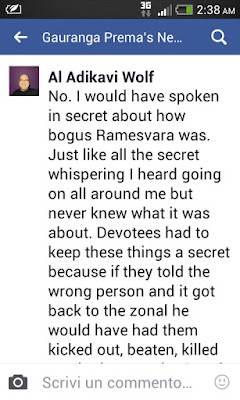 PADA: OK the Jayapataka regime will kick out, beat up, molest, sue -- and kill the Vaishnavas? That is "doing glorious service" to who -- Satan? 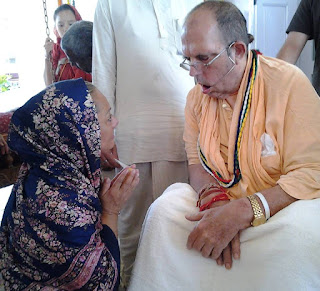 Bhakti Caru is encouraging Jayapataka to take more karma, after he has nearly killed the guy by having him take karma already? 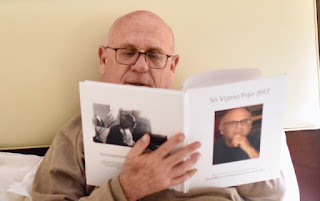 Another GBC acharya who was criticized recently for not wearing devotee dress at a big festival. 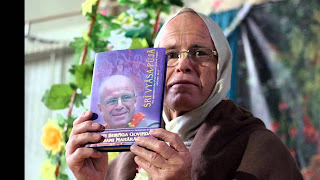 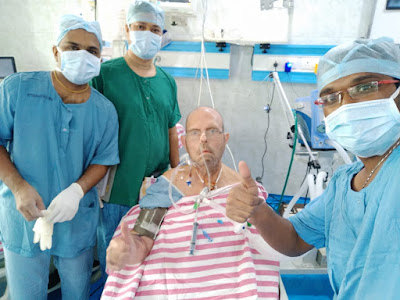 Yes I am fully recovered, any questions? 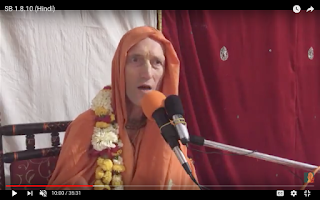 OK to sum, Bhakti Caru is still pounding the drum for the idea that the 11 were supposed to be worshiped as Krishna's acharya successors, which means, he does not know what it is to be Krishna's successor acharya, and that is why he rubber stamps himself and other conditioned souls as Krishna's guru successors. ys pd]