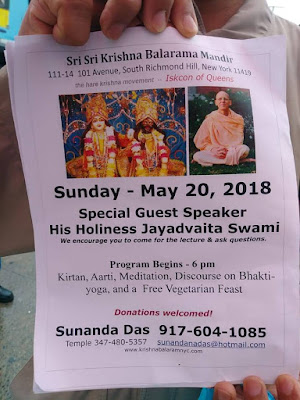 At least we all agree not to use Jayadvaita's version!

PADA: Purujit das (BLISS society, Spain) has edited his own version of the Bhagavad Gita As It Is, using the original manuscripts. There was a discussion going on, on this topic, but it seems to have disappeared. Thus, a few people asked me to make a comment on this issue, to present what is my opinion.

First of all, the 1972 Gita edition is the edition Srila Prabhupada personally approved of, and he used that book extensively for his classes and lectures, and he had that version printed in hundreds and thousands of copies for mass distribution. Therefore, the first problem is -- "another version" is not going to match up to what he is personally approving of, and he is personally using for his classes and so on. Ajit Krishna dasa says, we might come to the point of having many versions eventually, once the book becomes public domain. OK, but should that be done now already?

We don't think so.

The first problem is, who will be accepted as "the new editor" and how will we know this person -- or his work, has been approved? And what happens when one self-appoints oneself to the post of "the new editor"? Well, if there is one thing we do not have a shortage of, its self-appointed authorities!

Some of the Purujit's team said to me "anyone can edit the books of Srila Prabhupada, its just a question of moving a few commas and punctuation points." Not really, Srila Prabhupada said he wanted a scholarly editing of these books, which is why they were edited in the first place. He never used "anyone" for an editor, he wanted scholarly edits. Purujit himself said it took him three years to make his edits, that is not simply moving a few commas around? Of course, no other famous writer who has approved of his books being printed -- has had the books edited posthumously "using the manuscripts"? Its considered as disrespecting the author, everywhere! Of course -- this is Jayadvaita's argument, lets go back to the manuscript!

Then again if someone was going to make a new version of the Bible for example, using manuscripts, a group of certified Bible scholars would assemble together to try to compare all the existing translations and so forth. One person on his own would never be designated to the task without any consulting with the other scholars on the topic. Nor would one independent person's version of the Bible be accepted by the mass of Christians in any event, and in sum -- none of these changes would ever be approved except on a very limited scale by a few people.

Gaurahari das has the same problem. He wants to revive "the nectar of Krishna consciousness." OK sign me up, good idea, but his party's physically embracing of (unmarried) male and (married?) females, and kissing each other's feet etc. is not going to be approved on a wide scale. Ever! Anyway! The only wide scale approved book, which is approved by a large group of devotees now, is that same book that Srila Prabhupada personally gave classes from and used himself. We now have even a few ISKCON people using the 1972 books for book distribution. Why would we tell them to stop doing that at this stage, or try to give them yet another version? That will simply compound the confusion?

At the very least, senior people should be consulted to double check the editing work, especially if there are people living who had associated with the saint. OK one person CAN do everything, if he is a pure devotee, or he has been empowered and approved by a pure devotee to do the job (as Srila Prabhupada empowered people to do various services including editing).

There are other problems, for example Purujit's team is actually attacking the 1972 version as the false version, even -- the "rascal edited" version. Why would Srila Prabhupada accept and / or use ANY "rascal" edited books, and use such books for his classes, at all? That does not make a heap of sense. So it seems to some of us, the Purujit team are trying to say, only Purujit's version of Srila Prabhupada's books are going to be the accepted and non-rascal version. Ooops, and that is basically what the Jayadvaita team also says? Never mind they have no explanation why a so-called 1972 rascal edition would have been used -- whatsoever?

Then the Purujit folks said to me, Hansadutta has solved all this, he declared we have to go back to re-edit from the manuscript. Nope, Hansadutta still advertises the 1972 edition himself. When Srila Prabhupada says -- we have to print the original way, we  accept that means -- print the existing books as they were originally printed in the early 1970s. Notice, no new editor was named when he said that? If he had wanted extensive re-edits, he would have designated that task to a specific person -- or group of persons.

If the Purujit team wants to use another version from the 1972, that's actually fine with me, use whatever version of anything you like. Its a free world out there -- but to attack ALL the other Srila Prabhupada centered programs as "using a rascal book" is not going to produce much common ground in the Prabhupada centered camp. Its another attempt to chop the legs off of everyone else's preaching efforts as bogus, rascal, foolish and etc. ... which is what the GBC does to us as well?

If we are going to send other Prabhupada centered devotees to other centers, and they are going to be told they are carrying "the rascal edited book" -- how can we have a unified preaching effort? They won't even be able to read from the same book?

Lest we forget, these early 1970s books have produced more devotees than anyone else's books have ever done, period. They are very potent as they are. I was reading my 1968 version of the Teachings Of Lord Chaitanya, and its just as ecstatic now as it was when I first got it in 1970.

Srila Prabhupada never authorised a complete revision of Bhagavad Gita ... any posthumous revision should have an editor byline on the cover or inside facing page...

To quote Prof Graham M. Schweig..." This academic exercise will demonstrate the nominal degree of editing that would have been necessary and proper to bring the 1972 Bhagavad-gītā to unimpeachable academic and publishing standards. Such minimal editing stands in contrast to the current edition, which turns to earlier drafts and transcriptions to impose major textual restructuring upon the 1972 edition. We hold that this re-envisioning, however well-intentioned, reflects editorial judgments that challenge ethical publishing standards, as well as explicit instructions from Śrīla Prabhupāda. Once the analysis is completed, the findings will be submitted to our academic panel for review. The results will then be made public and presented to the BBT trustees / executives. Should they find our results compelling, we anticipate the BBT would appropriately present the revised edition and reinstate Śrīla Prabhupāda’s 1972 Macmillan Bhagavad-gītā As It Is as the preeminent edition."

Anyway, here is my last personal letter to Purujit's folks:

Dear Purujit prabhu, Sorry! You are not supported by the Prabhupada devotees? My best support, and actually only support, for many years was the Berkeley police, the FBI and the media. Lack of support is also what Srila Prabhupada himself experienced from his God brothers. Its sad, but that is the way of the world, we are sometimes not given much support from others, including devotees.

And you get bad mouthed? And yes, as a matter of fact, I get bad mouthed all the time from so-called devotees, and worse, I have been chased with baseball bats, given death threats, been assaulted and etc.

At the same time, I have experienced my own individual relationship with Krishna, and no one on this planet can have any ultimate effect on that, its an internal process mainly.

As for re-editing or creating another version of the BBT copyrighted books, from what we have seen over the past 35 years, any book that does not have a legal licence will not be mass distributed for long -- without the GBC's lawyers eventually stepping on the people doing that. If someone has a better fix for that issue, well fine, I have not been able to come up with any up to now. For you to imply that I should recommend people to begin to distribute a non-licensed book means, I would be encouraging people to possibly get into legal trouble. Why would I do that?

Anyway, I wish everyone good luck with their endeavors of service to Krishna, and hope they attain Krishna in the end. For my personal self, if I was going to print a non-licensed edition of any already licensed book, including any famous author's, I'd do that without making a whole lot of advertising. That's like asking for legal action?

And I should implicate others in these actions? Nope! But that's just me, everyone is free to try their own way of service, and lets see how it all works out. Of course if everyone printed their own book, that would make too many people for the GBC to sue, it would overwhelm them, but -- we are not going to get everyone to print any other than the 1972?

So! I did what I did, its had various results, some like it, some don't, but Krishna is the goal and that is all that ultimately matters to me. For now, our Prabhupada centered temples -- here and there -- and just about everywhere -- are using the licensed 1972 edition. Again! It would not be practical for us to tell them to introduce another edition, nor would they want an un-licenced version that could get them into legal troubles. Its not practical, apart from other considerations.

I simply do not think "another edition" is going to get much support in any event at this point, there is no consensus for that which I can see. That's just the way it is, and most of us are just moving ahead as best as possible under our current circumstances.

I am sorry if anyone has been offended by my comments here, lets move ahead and make progress and let everyone do their service, and things that work will work, and things that don't work won't. Overall, I am getting more people reading and distributing my stuff, and agreeing etc. and even more folks asking to translate it and etc. Meanwhile I am being consulted on yet another professional book etc. Anyway, I think that more people are getting into the idea of accepting Srila Prabhupada as their acharya, that was my intent all along and its happening gradually. Haribol! ys pd
Posted by krishna1008 at 6:16 AM