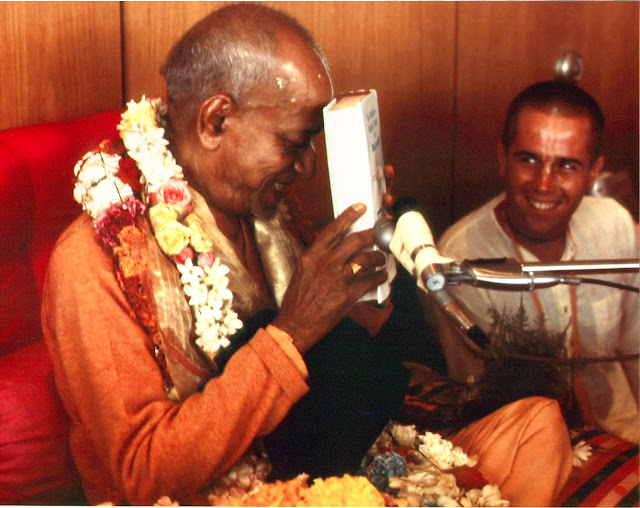 [PADA: When we first started to more actively complain in public about the over the top "editing" of Jayadvaita swami, around the mid 1980s, many people thought we were "being offensive" and we "just wanted to edit these books ourselves." What!


Yep! There are many "real edition" wanna be folks out there, already. So later on in the mid-1990s, when we proposed the 1972 edition should be used, many of our God brothers thought -- that might be a good idea, but the GBC will never accept.

Well the God brothers were right, the GBC did not agree. The courts however did agree, that the 1972 version could be used. Indeed, the courts agreed that the 1972 edition was used extensively by the founder and therefore this is the "known quantity" and / or proven, and certified edition.

Someone just called to tell me that both Purujit and Jayadvaita (and others?) are DEMONIZING the 1972 edition in order to prop up their own self-made editions, they are both using the same techniques, to push DOWN the 1972 version down -- in order to promote their own version. Same technique? Unfortunately, it looks that way. The good news is, even the karmi courts know what version was used by the acharya and what versions were not. Even the karmis know better on this topic than a whole pile of "advanced devotees." The conversation below is very typical, and I could easily find dozens more just like it with little effort. This is the direction things are going whether some people like it, or accept it, or not. ys pd]

Krishna Priya Devi Dasi: I would like to study Srila Prabhupada's books in depth; but I am confused ... from which books to study from? The first printed books, the books printed before 1977, or rather the books edited by Jayadvaita swami....

Krishna Priya Devi Dasi: But it is said to contain many errors...

Bastien: You can have the original version here

Bastien: Krishna Priya Devi Dasi if it's typing error its nothing. The (original) form is there ...

Krishna Priya Devi Dasi: Thank you. I shared the link on my page. Is that okay?

Rakesh: Use the 1972 editions, because those are the ones Srila Prabhupada read and lectured from. "Mistakes" may be there but ...

"On the other hand, that literature which is full with descriptions of the transcendental glories of the name, fame, form and pastimes of the unlimited Supreme Lord is a transcendental creation meant to bring about a revolution in the impious life of a misdirected civilization. Such transcendental literatures, even though irregularly composed, are heard, sung and accepted by purified men who are thoroughly honest."

"...even though imperfectly composed..."

Srila Prabhupada specifically indicated that our editing should only be minor spelling and grammar. Acharya's writing is not to please the kali yuga population but to please and glorify the Supreme Lord.

One day, when I was first with His Divine Grace in L.A., Brahmananda Prabhu came from New York and they were talking about the printing of a Bhagavad Gita with Sanskrit included. Evidently, there was a question as to whether the western people could pronounce the transliteration with diacritic marks.

Srila Prabhupad rang his bell, and I came into his room. Brahmananda was there. Srila Prabhupad handed me a paper with Sanskrit transliteration and said “Read this!” I have been able to read since I was three, so evidently, I made the pronunciations close enough. Srila Prabhupad said to Brahmananda, with great enthusiasm, “See! I told you they could do it!” He was very happy.

So the printing went on, and in New York, when His Divine Grace was there, Brahmananda brought in the first edition of the big Gita with all the Sanskrit in it. Remembering the LA experience, he very kindly gave the Gita to me, and said “Here, you can give this to Srila Prabhupad.” I was overjoyed, and went to His room to offer it to Him, followed by a photographer. I gave it to Him and said “Here is the first copy of Your new Bhagavad Gita, Srila Prabhupad.”

In His amazing way of innocence and childlike excitement, He took it and held it to His head, saying “Jai! Jai!” It was awesome to be present for such an important and empowering moment. Srila Prabhupad was so kind to me. Even though I was/am a deeply entrenched rascal, He has engaged me so many times in wonderful service. All Glories to Srila Prabhupad!

[PADA: Yep, not everyone shares the joy and excitement Srila Prabhupada has for his books. These books saved my life, for anyone to attack them is very odious, that's the best word we can use in a public forum. And these books STILL ARE saving lives all over the place, we should never minimize that process. ys pd] 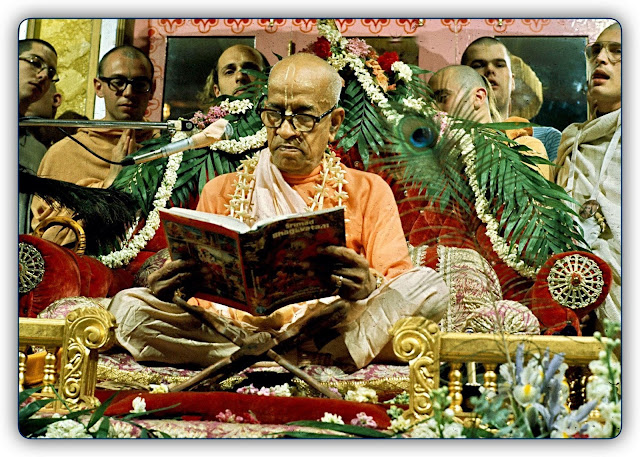 
Please accept my humble obeisances all glories to Srila Prabhupada

This is a nicely presented article here Puranjan prabhu. Well done. Maybe sometime in the future you could present a lengthy article on home schooling for the Gita to ease new people through the 1972 edition of the Gita. Why so many people are spending their time and money trying to present a "new edition" when so many billions of souls are already suffering from want of understanding the Gita that Srila Prabhupada taught from?

The answer is self interest only. If you are ever interested in our monthly Gita Study Guide classes then let me know.

"If we are going to send other Prabhupada centered devotees to other centers, and they are going to be told they are carrying "the rascal edited book" -- how can we have a unified preaching effort? They won't even be able to read from the same book?

Lest we forget, these early 1970s books have produced more devotees than anyone else's books have ever done, period. They are very potent as they are. I was reading my 1968 version of the Teachings Of Lord Chaitanya, and its just as ecstatic now as it was when I first got it in 1970.