God's creation: simultaneously one and different

P: Some people are very attached to the idea of God as the Creator. This is their idea of power, of greatness — the ability to create big wonderful things. Those are the people who pray to God for things — ”please create this and that for me” — and for whom miracles appear to be the criteria for God’s intervention. Create something great and I’ll be impressed.

I say this is a contamination of materialism. The job of God is to create stuff for us, and God is the greatest because He created the entire cosmos. "Are you telling me that YOU created it? Do you now think YOU are God?"

But Krishna is not the creator. Krishna is Bhagavan — the enjoyer, the one who plays with his friends in the eternal world beyond this creation. Even Vishnu as the Purusha does not even contact this world but is enjoying in the sat-cit-ananda realm. What is so great about creating this temporary and illusory world we are in now, that we are so keen on attributing it to God?

In fact I would even say that if we do not understand how Brahma (a jiva, remember) is the creator of this cosmos (albeit unable to do it independently, which I carefully pointed out), but rather attribute that to Vishnu, then we are opening up for Mayavada philosophy, since they could then argue that if God is the creator of this illusory and sometimes outright dark world, then such illusion and darkness exists in the mind of God — and since that is not possible then this world must be false or God as a person must be a product of maya too.

So I gave that title to that radio program just to poke a little at something I think have crept in from materially contaminated religion. But also to show how beautifully this Bhagavata dharma stands out from such religion, and how it thus resolves dilemmas that have become the main stumbling blocks for religions today — such as the theodicy problem.

It is interesting to see how even some devotees jump into defense mode when you say things like this, although it is pure, plain Bhagavatam. How much do they actually know of the very basics of Vaishnava philosophy?

[PADA: Yes, God is simultaneously everything in the material world, and not everything, because He is aloof from the material world, acintya bhedha bhedha -- simultaneously one and different. He is also the jeevas, and not the jeevas, because they have independence (to a limited extent). At the same time, everything is created by desire, so when the jeevas wanted to be independent, then this world was created to fulfill that desire. Of course then again God gives the jeevas their little independence so they can have these independent desires, so He is also creating that factor as well. Therefore God is called "the cause of all causes," ultimately, He causes everything.

So a devotee needs to know how all these functions operate together, and I think even the stories of the falling of Adam and Eve, and the falling of Satan, were an attempt to show how the jeevas need to be aligned with the Supreme, or they will have to be cast out of the kingdom and have to suffer.

Its an interesting topic and I think devotees need to try to grasp it better. At the same time, many devotees think pure devotee acharyas fall down into illusion because ISKCON has preached that for years now. This is another mis-understanding, that the people who are fully God conscious would become attracted to the mundane glitter of the materiel energy. And that is why is is a major offense to consider the spiritual master contaminated, a pure devotee knows very well how all these energies operate, and he does not transgress them. ys pd]

"After instructing Arjuna, Kṛṣṇa will ask him, "Now what you want to do?" Because Kṛṣṇa does not force. Kṛṣṇa says that "You surrender unto Me." He does not force, that "You must surrender. I am God. You are My part and parcel." No, He'll never say that. Because He has given you little independence, He will not touch it. Otherwise what is the difference between a stone and a living entity?"


A devotee needs to know what are the different categories of God's energies, and surrender to the favorable aspect, which means to align with God desires.  Notice that God wants us to have certain desires, and He does not want us to have other desires, but yes, at the same time He allows both good and bad desires because He grants us independence. ys pd 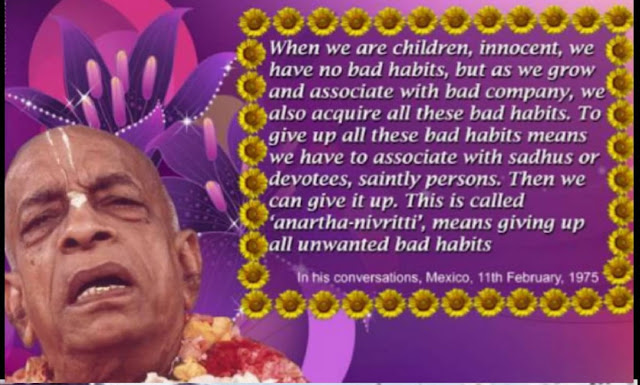 When the GBC went over to Sridhara and Narayana Maharaja, BP and BV Puri, babajis etc. they introduced the idea that we jeevas do not originate with Krishna, we originated from tatastha or with Maha Vishnu. No, Maha Vishnu aspect is AFTER we fell. They created confusion. ys pd
Posted by krishna1008 at 6:26 AM