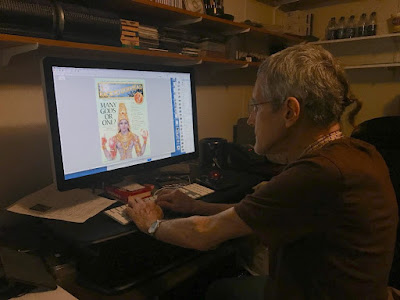 He passed on today June 22, during brahma muhurta while hearing Srila Prabhupada chanting japa.
Yamaraja das was my connection all these years to the BTG. We were real brothers with the same mission for Prabhupada's movement, to bring the wonderful aesthetic side of our culture to the public's awareness. He did this all himself as BTG's layout designer / editor / photographer and above all one very loyal, dedicated, totally focused Krishna bhakta who served Srila Prabhupada's mission his whole devotional life without distraction.

1970-71- I was the first devotee to speak with him on the street corner in Portland Oregon where he would sit there selling, I think it was the Scribe- anti-establishment paper, not sure though, with his long hair and humble hippy clothes he would listen to our kirtans; I believe we gave him the 1968 original Gita, I would bring him prasadam, talk the philosophy with him, invite him to the temple, and all of us encouraged him to join us, and the rest is his blessed history.

We later in '72 -'73 met up again in Brooklyn and worked for the books in the same building at Tiffany place with that whole dedicated crew. A real devotee trooper! A very dear and special soul to Srila Prabhupada and Radha and Krishna. (PADA: who is the author?)
Posted by krishna1008 at 1:52 PM