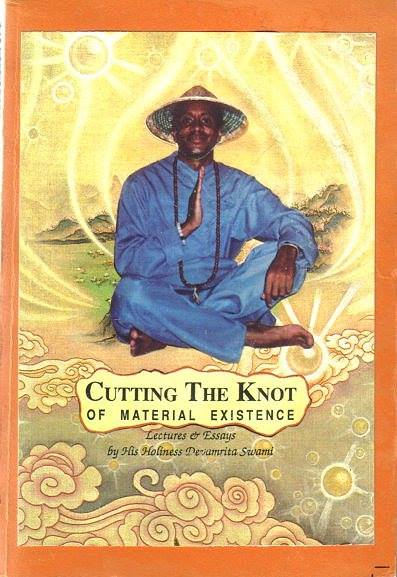 To: Dear Esteemed Maharajas, Temple Presidents, and Devotees, In February of this year at the annual GBC meetings I met with a cohort of my GBC god brothers at their request to address some concerns raised in regards to the transparency of my past when it comes to accepting and initiating disciples. The conversation was conducted respectfully and in a collegiate manner and I have humbly conceded to comply with some conditions put forward during the discussion. Those conditions are...

That the below declarations be made publicly available in all temples and zones where I am a GBC, hold a position of leadership, or have a significant number of supporters My declaration... The proverbial 'elephant in the room'... my re-entry in to Iskcon after being excommunicated during the New Vrindavan years was under an agreement of amnesty, I continue an expectation of that amnesty being honored.

I reserve my right to silence on questions around my involvement in the activities of the time, assets I had control over, and the ongoing proprietorship of said assets.

[PADA: Is this for real? A GBC guru making some humble statements? Hard to believe it was on Dandavats? And Dandavats might take it down? Or has already? Anyway! Lets review whatever it might be:

So, folks like Devamrta (and Radhanath / Umapati / Kuladri etc.) do not have to answer questions regarding their involvement in the (criminal?) activities going on in New Vrndavana at that time? Apparently, there was a lot of cover up activity by various managers for the likes of child molesting and so on and so forth? No one needs to nowadays clarify how this all came about?, and investigate who were the perps; who were the cover ups; who was in charge of what; and so on and so forth, to seek justice for the victims? No GBC justice department is engaged in even investigating what happened, and who are the principle players involved in this regime and etc.?

And then these New Vrndavana folks made a "plea deal" with the GBC, that they would be granted amnesty (from investigation) and welcomed into ISKCON as long as -- no questions were ever asked about their potential participation in the criminal regime going on there? How can ISKCON clean up their criminal mess by giving "amnesty" to some of the biggest leaders at a place where many crimes had been going on?]

In unison with the vast majority of my Sanyasi godbrothers I decline to participate in the GBC mandate that Sanyasis' declare their assets and income on an annual basis.

[PADA: What is the use of a GBC "mandate" if their gurus and sannyasas decline to participate? There is no teeth to their legislation, its all window dressing? We should not have financial accounting, isn't it a crime for leaders of a charity to have no accounting for their fiscal activity?]

I include questions around my Australian registered company 'Jay Matsya Superannuation' within this privacy. I have several aliases that I have not deemed necessary to declare publicly in the past, Devamrita Swami, Jay Matsya, and my birth name Lee Reynolds.

I have been married and divorced twice, once to a Polish devotee, once to a Danish devotee. There have been times where I have denied being married In 2016 a recording was made public of me giving advice in regards to how local authorities should deal with the reporting of a sexual assault. In the recording I advise them to try and get the victim to state it was mutual and that it will all go away. No Iskcon authority has expressed to me that this advice is inappropriate. Your humble servant, Devamrita Swami

[PADA: Cover up crimes? Birds of a feather? A devotee says, this is wrong, he was never married to any women ever because -- he is part of "the gay MAFIA." Hee hee!]

Subject: From Misogyny to Critical Thinking

Please accept my humble obeisances. After a devotee rather naively
suggested that everything uttered by any sannyasi represented authority,
truth and shastra for him, Dhyanakunda dasi prabhu (Almvik, Sweden)
mentioned that H.H. Devamrta Swami had once shockingly declared in a public
lecture, "Married women are private toilets. Unmarried women are public
toilets." She wrote, rhetorically, "This statement comes from a sannyasi in
good standing, Devamrta Swami, and was made in public, in a lecture. Would
you accept it as representing the scriptures?"

[PADA: Good point! The GBC is very fond of saying, "The worship of the bona
fide acharya, i.e. the ritvik system, is not found in shastra." OK, what do
they find in shastra? Worship of loathsome, nauseating mysogynists, if not
child molesters, is what they find in shastra? What shastra are they
reading then? And some from the Gaudiya Matha became ditto head supporters
of the GBC?]

[COM] By way of conciliation and forgiveness, she continued, "The lecture I
am talking about was given many years ago. Everybody is learning and
maturing, sannyasis included. Whole movements are learning and maturing.
Likely, Devamrta Swami himself would not make such a statement now."

[PADA: Good point. The GBC makes gurus out of people who are not yet
mature, even materially, in their relationship to women. They are still
learning. Even a common woman devotee in the audience is vastly more
advanced than these big swamis, and a neophyte woman can spot the highly
defective errors of these bogus gurus.]

[COM] "Even devotees in high social positions, and even devotees whose
dedication to the preaching mission are unquestionable, may at some point
in their lives make statements that are less than representing the spirit
and message of the scriptures."

[PADA: And the GBC mixes up these mistaken fools with acharyas.]

[COM] "Some may choose not to argue with the sannyasis' statements. They
consider it less risky than arguing. Others feel it is more risky not to
evaluate each statement on its own merits."

[PADA: Another good point. It is very risky to argue with the swami,
because you can get tossed out, or have the impression of an aluminum
baseball bat on the back of your skull.]
[COM] In response, Dvaipayana Vyasa das prabhu (Belgrade) wrote: "How it is
that when someone wants to establish or defend an opinion of some guru or
swami, it is usually said how such persons are in posession of absolute
truth, completely pure or at least perfectly representing their guru and in that way entire heritage -- and when such an opinion proves not to be defensible at all, then we see 'everyone is maturing'?"

[PADA: Folks on com are waking up to the GBC guru scam. Big time. The GBC
says their swami is an acharya, free from mistakes, illusion, cheating and
sensory defect, but he has been calling women toilets. So, even the common
devotees are waking up, "This is a complete contradiction." Thus: these GBC
are not acharyas but cheaters.]
[COM] "If someone is maturing in the course of time then we can't talk (at
any time) in absolute categories, about perfect knowledge and so on."

[PADA: Good point. If someone is gradually being purified, how can we
worship him as pure already?]

[COM] "If we talk about absolute knowledge ('the guru knows it all') then
we can't defend such things by 'everybody is learning and maturing'."

[PADA: Right you are! This is called cheating. If he is learning, he is not
yet an acharya. So, this devotee is asking: why are you mixing the absolute
and relative planes?]
[COM] "There should be one standard. Not two or more, interchangeable as it
fits our purpose at the given moment."

"If women are toilets to all these iskcon sanyassis, swamis and gurus, who have taken their birth from such toilets, then we can understand where their stooly manure consciousness comes from; these contaminated pigs have no purity."

[PADA: And they even call their own mother a toilet? Why does the GBC make these people their gurus and leaders? This is the ISKCON Governing Body Council's idea of "God's living successor diksha gurus who can absorb sins like Jesus"? Honestly! This is the best they can come up with for that post? ys pd]
Posted by krishna1008 at 7:05 PM